Congratulations to "Deb P.", the winner in Terry's giveaway. Thank you to all who participated!

Starting a new series can be frightening. Every time an author puts out a new book, there's a constant worry. "Will my readers like it?" When it's a new series as well, the fear factor skyrockets. So, yes, I'm scared. To help ease the fear, my new Triple-D Ranch series spins off my existing Blackthorne, Inc. covert ops series. My hero, Derek Cooper bridges the gap as a former Army Ranger and Blackthorne operative. He's a cattle rancher now, but trouble seems to find him—and his cowboys, all former Rangers. Book 1, In Hot Water, tells the story of Derek and Sabrina, who's a culinary school instructor on the run. She ends up at the Triple-D Ranch. 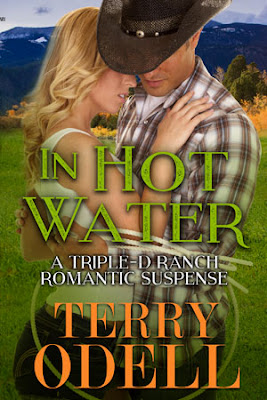 Derek needs a cook. She needs a place to hide.

Derek Cooper has left the violent life of an Army Ranger and a covert ops agent for Blackthorne, Inc. in favor of the more peaceful life of a cowboy, running the family cattle ranch in the Colorado mountains. However, when he rescues a stranded motorist, he has no idea this blonde pixie is going to bring violence to his doorstep—or work her way into his heart. Unable to resist helping her discover why she’s in danger ends up with him unable to resist her … period. When they discover a potential bioterrorism plot, they’ll have to put their attraction on hold while they search for a way to prevent it.

Sabrina Barton believes in second chances, and she’s running a vocational culinary school to prove it. But when her brother dies in a mysterious hit-and-run, and she’s beset by an unsettling series of accidents, she can’t believe in coincidences. She goes in search of the one man her brother told her to seek if she ever needed help. Trouble is, the letter with that advice was delivered at her brother’s funeral, more than ten years after he wrote it. Will cattle rancher Derek Cooper be able to help her? And will she be able to resist this handsome cowboy who seems to be no stranger to violence?

Excerpt:
Derek might not have a radio, but this was Colorado, and he did have a gun. Raising the flashlight with his left hand, he kept his right on the butt of the Kimber 1911 pistol resting in the pocket of his slicker.

Most of what he saw was a brightly illuminated curtain of shimmering raindrops. He swung the light in narrow arcs on the ground in front of him, checking the footing. His mud boots sloshed through the standing water. Between the wind and the rain pounding on his truck and the car in front of him, he doubted the person in the car would hear him shout. And too many years of working in field ops strongly suggested a stealth approach would be smarter. At least until he was close enough to see what he was up against. He tightened his grip on the Kimber.

That was years ago, idiot. Don’t you listen to what you say to your sister? Nobody’s going to be sitting in a disabled car, lying in ambush, in a monsoon.

Yeah, but it could be a mom with a couple of kids, protecting them like a bear with her cubs.

Reminding himself he was a cattle rancher now, not an operative, he let go of his weapon and raised his right hand in the air as he approached the driver’s side window.

When there was no indication anyone had seen him, he tapped his flashlight gently against the window. “Anyone in there? You need assistance?”
No response. Derek cupped his free hand against the window and peered inside. Empty except for a small backpack on the passenger seat and two cardboard cartons on the rear. A slight rocking of the car set his senses on alert. Could someone be trapped in the trunk?

It’s late, you’re tired, and expecting the worst. Check it out, dimwit.

Derek drew his Kimber, keeping it at his side. He eased his way toward the rear of the car.

A figure rose from a crouch beside the rear fender. Short. Soaking wet. Brandishing a lug wrench.

Giveaway:
In case you're not familiar with the Blackthorne, Inc. series, Terry is giving away 1 copy of When Danger Calls, the first book in that series. Digital format of the winner's choice.

Giveaway ends 11:59pm EST March 3rd. Please supply your email in the post. You may use spaces or full text for security. (ex. jsmith at gmail dot com) If you do not wish to supply your email, or have trouble posting, please email maureen@justromanticsuspense.com with a subject title of JRS GIVEAWAY to be entered in the current giveaway.