One of the most difficult parts of writing a romantic suspense book is getting the right balance between romance and suspense. I normally like to start my concept for a book with the relationship and attraction between the two main characters clear in my mind and then see what sort of danger they can find themselves in.

But FULLY COMMITTED, book 2 in the Omega Sector: Critical Response series came a little differently.  Instead of the hero and heroine, I knew who the villain was, and knew how he was getting away with his crimes (What Romantic Times Book Reviews called a “surprising and well-played…whodunit”).

This mystery element came straight out of the time I spent at the WRITER’S POLICE ACADEMY in 2014.  That experience was absolutely fantastic. What I learned from it directly shaped FULLY COMMITTED, but also how I look at (and write about) law enforcement and criminals in general.

Here are some of the opportunities I was able to experience at the Writer’s Police Academy:

The decisions EMTs/Paramedics/firefighters have to make when faced with a multi-victim situation. We were given a demonstration (using actor victims) of what such a scene would be like. EMTs sometimes have to make life or death choices, especially in large accident scenes. 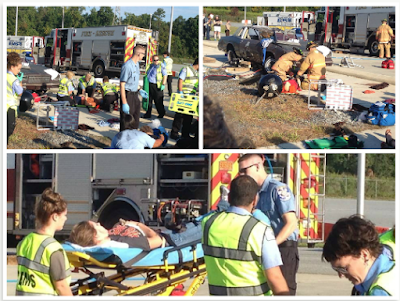 How daggone heavy a SWAT vest is. All in all, SWAT moves around with 40+ pounds of gear on them – then still have to move quickly and effortlessly. I had a great deal more respect for them after lifting the vest for myself.

I learned how loud it is, even from 30 yards away, when a door is blown off its hinges. Being inside the building would scare the pants off someone who didn’t know it was coming. I knew the blast was coming, had my ears covered, and still jumped when it happened. 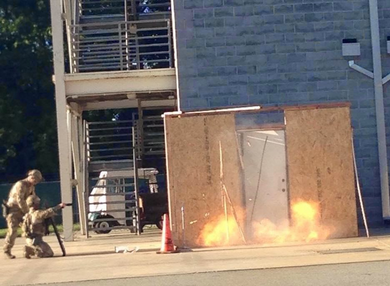 The adrenaline that comes along with doing a building search, knowing someone is inside. Seriously, I was one of the more calm people, and my heart rate was through the roof by the time the exercise was completed. It was scary. Even though I knew I was not in real danger, knowing someone was somewhere hiding in this empty apartment complex… nerve-wracking.
The pressure of giving CPR to a critical patient while  a REALLY HANDSOME young paramedic is watching in a moving ambulance. The ambulance ride-along (with EMT students, not real patients) was a huge learning experience for me. We were able to watch them work, plus ask questions.

We learned a lot more also at the Writer’s Police Academy.  Workshops on: prostitution, K9s, Special Ops, and forensic art. Not to mention all the information I gleamed from talking to law enforcement officers, firefighters, EMTs, lab technicians and TSA agents. Just getting inside their minds, listening to their language was fascinating and useful.

By the time I left I had a notebook full of scenarios, stories and specifics you can plan to see in my books for years to come. FULLY COMMITTED is just one of those great influences. 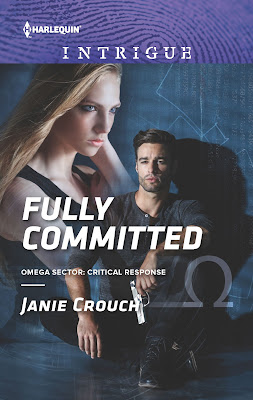 The Texas heat did nothing to stop an elusive criminal

Omega Sector: Critical Response agent Jon Hatton is running out of options. If he doesn't get a decent lead soon, a serial rapist will strike again. His best chances lie with the intuitive skills of forensic artist Sherry Mitchell, a beautiful woman struggling with PTSD.

In exchange for her help, Jon teaches Sherry to manage her symptoms, and soon they are unable to resist their Texas-hot attraction. With Jon as her lifeline, Sherry uncovers clues that prompt a frightening message from the attacker. Jon knows Sherry's determined to help catch this criminal, but keeping her safe is his top priority. Followed by making her his bride.

GIVEAWAY
Win a Character Named After Your Loved One VALENTINE CONTEST! on Janie’s website: http://bit.ly/CrouchContest   Responding to this JRS post gets you extra entries!

Check out Janie’s FREE READ on Harlequin.com, PROTECTOR’S PROMISE ,
and answer the following question for extra chances to win: list anything about the hero or heroine that you like (or don’t like!) so far in the novella.


JANIE CROUCH’s books have been nominated for both the 2014 and 2015  Romantic Times (RT) Reviewer’s Choice Award and various other awards.  She currently lives on an American military base in Stuttgart, Germany with her hubby and four kids. Unfortunately,  ihr Deutsch ist nicht sehr gut zur Zeit. She loves travelling, adventure racing, and movies of all kinds.
Connect with Janie:
Website  •  Facebook   •  Author FB Page  • Europe “Pic of the Day”
Twitter  •  Giveaways  •  Amazon  •  Goodreads