There’s nothing like a trip to find an idea for a romantic suspense.  Danger is everywhere, well not really but it’s amazing what an active imagination can find.  Why just today a trip to the grocery store unearthed one suspicious driver cutting in front of me just a little too quickly, obviously escaping the scene of the crime.  And in aisle three of the grocery store I saw a tall man with a slouch looking rather furtively at the canned goods as if that wasn’t his true purpose, as if he was waiting for someone or something to…

Look at that, fifteen minutes away from home and I’ve got at least one villain ready to go.  Now I just need to find a little love in the air and voila....

Seriously, I wish a romantic suspense were that easy.  One thing is certain, my stories are born out of my love of travel that started with long ago family vacations.  Every summer my father drove us to various locations across Canada and the United States, and even a tiptoe into Mexico.  As an adult I’ve ventured further afield and along the way I’ve filled travel journals with encounters and experiences.   Some memories need no recording, like the Hawaiian earthquake or the face-to-face standoff with the monitor lizard in Malaysia.  All of those experiences influence my stories. I love to recreate the feel of those foreign settings, placing my characters smack in the middle of a place that’s frothing with danger, whether its Myanmar’s majestic Plains of Bagan, the temples of Angkor Wat or the sweeping plains of New Mexico

Setting to me is as important as the characters.  This is the home where everyone is going to live and love, and possibly die…but don’t go keeping a body count!

While I’ve published other romantic suspense novels, Suspect Witness is special because not only has it just become available, it’s my Harlequin Intrigue debut!  Set in Malaysia, the setting was easy to bring alive as I’d travelled to Malaysia and to the Gunung Mulu National Park and their massive caves that become in Suspect Witness, a place for my characters to run amuck, to fear- to flee and maybe - to love. 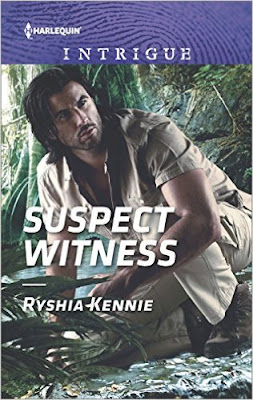 She had been pretty once.

Now her skin gleamed in the glow of the fluorescent lights. A strand of auburn hair fell across a well-shaped brow and her lips held a glimmering trace of sherbet lip gloss.

"It's a shame, really," the coroner said as his sun-bronzed hand held the edge of the stark white sheet. "Life was just getting started. Twenty-five or there about." He shook his head. "I try to remember that every time I step out of the house. Enjoy the moment. You just never know. And in this job you're reminded of mortality every day." A strand of salt-and-pepper hair drifted across his forehead. "I try not to think about it or it would drive me crazy."

"True," Josh Sedovich said. "Any idea how she died?"

The coroner nodded. "She was hit by a blunt object to the back of the head. Surprising, I always thought Singapore so civilized until I moved here and took this job. Unfortunately, it's turned out no better than anywhere else."

"Why does it always end like this? On a temporary visa to see the world and, just like that, it's over." Josh ran his hand along the side of his neck. "It's damn hot in here."

"No air-conditioning," the coroner said. "Is she who you're looking for?"

"No. Fortunately not." He fisted his right hand. Not so fortunately for the unknown young woman on the coroner's slab.

Ryshia Kennie is the award-winning author of her city’s writing award and a semi-finalist in the Kindle Book Awards. There’s never a lack of places to set an edge-of-the-seat suspense as prairie winters find her dreaming of warmer places for heart-stopping stories.  Settings with deadly villains threatening intrepid heroes and heroines, who battle for their right to live or even to love, in a place that neither - or both, may call home.

Or, get all the news by signing up for her newsletter:  The Walkabout
Posted by Maureen A. Miller at 12:30:00 AM