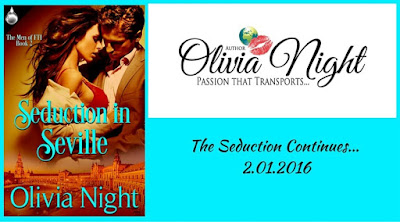 Nerd Girl Official:
"We are taken on a wild ride and I loved every minute of it. I like to read books that have action and move at a fast pace and this one was just what I wanted. I look forward to reading more from this author. " 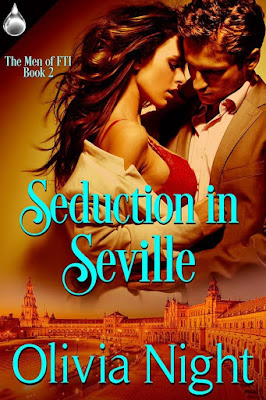 Seduction in Seville (The Men of FTI, Book #2)

In a hospital in Seville, Spain, Patrick Kane lies in a coma. Ambushed and shot while protecting someone important to him, he fights to survive.

She never thought she would see him again. Patrick, the man who’d brought her back.
Eight years ago, Patrick Kane, a joint partner in Fairlane Trade International, descended into a basement of horrors. That horrible day he rescued many women, but one he would always remember. Her beautiful doe eyes filled his dreams and haunted his nightmares.

Madison Lockwood, a nurse, has struggled to put her past behind her, trying to forget the time she spent in captivity. But she recognizes the man who rescued her and brought her out of that terrifying reality. She owes him her life. Patrick is gravely injured, and Madison vows to see him through.

When Patrick opens his eyes, he instantly knows that he made a mistake leaving Madison after freeing her from the clutches of a human trafficking ring. She is meant to be his. As Patrick tries to win over a wary Madison, the past they both thought was gone for good comes back with a vengeance. One by one, the survivors of the horrific ordeal are being murdered. Patrick knows that Madison will be next if he doesn’t protect her.

Together they must fight for their survival. Seduction In Seville, book two in the Men of FTI series, is a tale of redemption, murder, new beginnings, and love that takes the reader on a wild, exotic ride.

Excerpt:
“And you needed me. You leaned on me, slept on me. Held my hand when we got to the hospital. I should have never left. At first, I told myself it was the right thing to do. You didn’t know me. You didn’t need me. I convinced myself that I was making it up. That what I was feeling was to make me feel better. I couldn’t save them all. I saved you. So, I told myself that this was all just me trying to take away my guilt...and that you really didn’t need me. But then, after time had passed and I saw your face more clearly...the way you had looked up at me in that basement. The way you looked at me in the Jeep. In the hospital. I knew leaving was a mistake. You did need me.”
Madison was silent through it all. His explanation, though disjointed, was perfectly clear. She continued to look up at him. She had no clue what to say, so she didn’t say anything.
“And then I realized it wasn’t just about what you needed. It was about what I needed. I needed you and to be there for you. To see you through it. And I could’ve found you, but...I didn’t. I stayed away.”
“Why?” she whispered.
He looked down at her then. “Because I knew Madison. I knew.” As if this were an entirely understandable explanation.
“You knew what, Patrick?”

He stared at her, unblinking, and then said, “That you were mine.”

Other titles by this author:
SEDUCTION IN SEVILLE 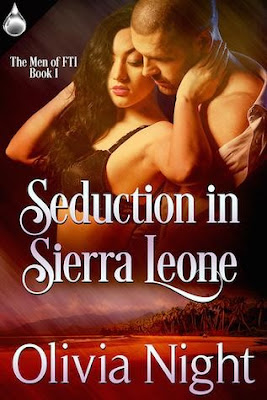 Want to know what started it all?

In the mangroves of Sierra Leone, two strangers raised a world apart find themselves inextricably connected. Seduction in Sierra Leone, the first in a series of three novels, is a fast-paced tale of murder, lust, and love that transports the reader to a foreign and mysterious world of danger.

Aislinn Salameh, an American relief worker, is searching for purpose in her self- imposed lonely world. The stranger who enters her village on a blistering hot day seems more animal than human. She knows she should stay far away but can’t stop herself from being drawn to the mysterious man.

Brandt Fairlane is haunted by the sins of his past. Detached from others, Brandt has spent his life alone. His line of work is too dangerous for the luxuries of love and family.

When Brandt sees Aislinn and her haunting eyes, he knows he must possess her. But when Brandt’s past comes back from the dead and Aislinn is caught in the crossfire, it is up to him to keep her safe. In order to survive, they must learn to rely on one another. As they run for their lives, the heat between them becomes undeniable. Now, Brandt must not only protect Aislinn from a madman committed to stealing her away, but he also must protect her from himself. Because if Brandt steals her body and her heart, he’ll never let her go.

Reviews for Seduction in Sierra Leone, The Men of FTI Book 1

Night Owl Reviews
“Seduction in Sierra Leone has a great combination of action and romance. This book is well written and fast paced. There is enough hot sex to keep you reading and cheering on the couple. I recommend this book to all suspense and military romance readers. I’m looking forward to next book.”

Author Bio:
Olivia Night, a fictional character herself, has always been an avid reader and writer. She found the romance genre in college and has never been able to get enough. One sleepless night, the main characters of Book One in her Men of FTI  series sprang from her head fully formed. They demanded she tell their story; so she did. As they revealed themselves, so did two other intriguing characters. Those characters convinced her to give them their own books because their stories were worth telling too. And so Olivia suddenly became a romance author. When Olivia is not writing, she has the best job in the world, which, too, will remain a secret. In her free time, she reads, write, drinks wine, or is, most likely, out emulating Buffy the Vampire Slayer. Olivia lives in one of the most diverse and vibrant cities in the U.S.—Baltimore. She lives with her cat, which she is convinced was a gladiator in his past life. Olivia plans to continue being awesome at this thing called life. Really, that’s her only goal.


Follow Olivia @olivianightread
Posted by Maureen A. Miller at 12:30:00 AM