By Break Of Day 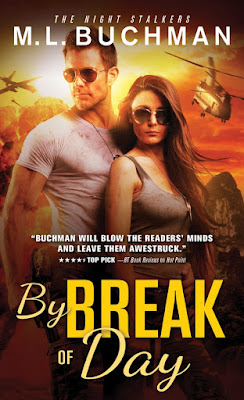 BY BREAK OF DAY

NAME: Kara Moretti
RANK: Captain of the Army’s stealthiest remote piloted aircraft (Don’t call it a drone)
MISSION: To be the eyes of the team

NAME: Justin “The Cowboy” Roberts
RANK: Captain of the Army’s most powerful helicopter
MISSION: To redeem the past, at any cost

They Put Life, Limb, and Heart on the Line

Two new captains join The Night Stalkers with two different strategies in life, love, and combat. When Brooklyn-raised Kara joins the crew, she knows one thing as an absolute truth: to stay safe, keep everything and everyone at a distance. Born in Texas, Justin knows only one honorable way to make up for losing his first crew to a suicide bomber: he flies with all his heart. When Kara and Justin collide on a top secret mission deep in the Israeli desert, then the battle truly begins.

M. L. Buchman has over 35 novels and an ever-expanding flock of short stories in print. His military romantic suspense books have been named Barnes & Noble and NPR “Top 5 of the year,” Booklist “Top 10 of the Year,” and RT “Top 10 Romantic Suspense of the Year.” In addition to romantic suspense, he also writes contemporaries, thrillers, and fantasy and science fiction.

In among his career as a corporate project manager he has: rebuilt and single-handed a fifty-foot sailboat, both flown and jumped out of airplanes, designed and built two houses, and bicycled solo around the world.

He is now a full-time writer, living on the Oregon Coast with his beloved wife. He is constantly amazed at what you can do with a degree in Geophysics. You may keep up with his writing at www.mlbuchman.com.

This February, M. L. Buchman raises the stakes—and the heat—in By Break of Day, the latest in his acclaimed Night Stalkers series. To celebrate Buchman joins us on the blog to share an excerpt and answer a quick Q&A!

How do you do research for your books?
I read voraciously. I read memoirs, technical manuals, blog posts, newsfeeds, especially anything that will offer me insights into how a character might feel/react/think. I interview people only rarely, but that has much more to do with my own deeply introverted nature than any lack of desire to get it right. I spend and hour of research for every 3-4 hours of writing.

An Excerpt:
Captain Justin Roberts flies a massive Chinook twin-rotor helicopter. Captain Kara Moretti flies a drone and is trying out to be the Air Mission Commander during a training exercise.

Captain Justin Roberts gave the collective control between his knees a little nudge forward. Fifteen tons of helicopter carrying a platoon of U.S. Rangers and their gear eased forward as smooth as a baby’s behind.
Every single time he flew his big MH-47G “Golf” Chinook helicopter, it was a surprise—a surprise of how much fun it was. Like they were meant for each other since long before they met.
SOAR only flew three primary types of helos, all deeply modified to the 160th’s specification. The Little Bird, the Black Hawk, and the Chinook Golf. His girl was the monster of the outfit. Calamity Jane was definitely a Texas-sized lady: big, powerful, and dangerous.
“I feel the need for a song.”
“Oh God, spare us.” Danny Corvo spoke up from the copilot seat. From there he was Justin’s second set of eyes and the master of the helo’s general health and well-being.
“Oh, give me a home,” Carmen cut in from her position at the starboard gun close behind Justin’s seat.
Carmen Parker was hot shit with an M134 minigun that could unload four thousand rounds-a-minute of hell on anyone who messed with her. She was also king, er, queen of the bird—the absolute last word on maintenance and loading.
“Where the Chinook helos roam.” Talbot George was always off-key at the side gun behind Danny’s copilot position, but he sang with heart, even if with a distinctly British accent.
“And the flights are at night every day,” the three of them sang together in splendidly awful harmony.
Danny groaned as if in the throes of death-by-torture agony.
As usual, Raymond Hines kept his own counsel at the rear ramp gunner’s post. The Chinook was the size of a school bus inside. Tonight, in the cargo area between the cockpit and Ray’s rear post, thirty U.S. Rangers and their three ATVs were counting on SOAR to sling them into position. The big rotors fore and aft let her lift her own weight in cargo; even in high-hot conditions the Chinook outperformed most everything around.
By the third chorus their harmonies were better, so Justin hit the transmit switch for the last of it. It got the answering transmission he was hoping for.
“Justin, honey?”
“Here for you, sweetheart.” Kara Moretti just slayed him. From the first briefing where she’d moseyed in all dark and Italian and perfect, his head had been turned hard enough that he kept checking his neck for whiplash. Then when she opened her mouth and poured out thick Brooklyn… Two months later and he still didn’t know what to do with that, not a bit of it. It was all… wrong, yet it was so right. Her voice should be some sweet bella signora, like the one he’d spent a week with while stationed at Camp Darby outside of Pisa on the Italian coast a couple years back.
Instead Kara was—
“You do that to me again and you’re gonna be singing soprano the rest of your life. We clear, Cowboy?”
—a hundred percent, New York. “Y’all wouldn’t do that to me now, would ya?” He laid it on thick.
“Castrate the bull calf? In a heartbeat. And I ain’t your sweetheart.”
“I’ll hold him down while you trim ’em,” Lola Maloney called in from the DAP Hawk.
He was about to say something about how it made the meat taste more luscious and tender—which was why they castrated most bull calves—but he couldn’t figure out how to phrase it without it sounding crude and perhaps tempting her to start looking for some neutering shears when Trisha cut in.
“Roger that! We’ll pin him, you chop and cauterize. Use a really hot iron.”
Claudia Jean Gibson at the controls of the Maven II didn’t speak much, but he could feel her out there agreeing with them.
Justin winced in imagined pain, as he was sure every man on the comm circuit did. He figured maybe it would be better if he kept his mouth shut. Once the women of the 5D got on a roll, wasn’t no man on God’s green earth who was safe.