Congratulations to "Rachel B." the winner in Elizabeth's giveaway. Thank you to all who participated!

“You’re thinking you should’ve gone out with me the first day I asked, aren’t you?” 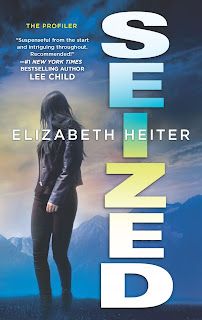 That’s the question FBI Hostage Rescue Team agent Kyle “Mac” McKenzie asks the heroine of my Profiler series, Evelyn Baine, in my short story, AVENGED.  The story takes place right after the second book in the series, VANISHED, ends, and the two of them have gone on a – secret! – vacation together.

They work for the FBI, and they’re both part of the Critical Incident Response Group – Mac as a tactical specialist (think the FBI’s version of Special Operations) and Evelyn as a profiler – and rules about dating within the group are murky at best.  It’s why Evelyn resisted Mac’s flirtations – or at least tried her best! – throughout the first two books in the series, HUNTED and VANISHED.

In my new book, SEIZED, their new relationship is still a secret, which means that when Evelyn is taken hostage by a cult of survivalists and Mac is one of the agents tasked with breaching the compound, he has to keep his feelings hidden.  Inside the compound, Evelyn realizes the group may be planning a lethal attack and she needs to find a way to get that information to the outside world.  Her relationship with Mac proves to be the key…

Creating a hero for a series like this one is a lot of fun.  Different from a standalone book, I have to keep throwing new challenges at the couple, and keep growing their relationship in new ways as the series progresses.  The connection between them also changes Evelyn as a person – she’s inherently closed off, and it’s Mac who begins to open her up to the world.  For a profiler with a real gift for getting inside people’s heads, but less of an idea how to talk to them in a social context, it’s a chance for her to grow in a way she never would have done if Mac hadn’t come into her life.

And that’s something I think a good hero should do!

AVENGED
a FREE short story releasing a chapter a day on the Harlequin.com website:

FBI profiler Evelyn Baine and fellow agent Kyle McKenzie are—secretly—on vacation together, visiting an island off the coast of Georgia. Evelyn has recently solved a notorious cold case, so she considers their holiday a reward of sorts. More than that, it's a cautious acknowledgment of her growing feelings for Kyle.

One day a body washes up on the beach, a body that's been disfigured. The killer has carved the word "pervert" into the victim's stomach. A second murder, with the victim labeled a "killer" appears soon after. The police don't agree when Evelyn tells them the murders look like the work of a vigilante trying to avenge…something.

Evelyn and Kyle find their own lives at risk as they move closer to the truth. 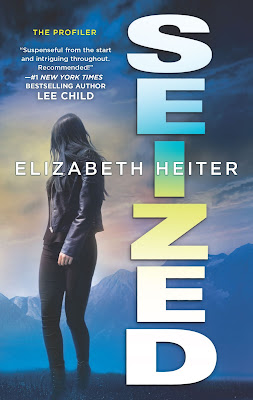 SEIZED
Book 3 in The Profiler series:

Danger is all around her...

What should have been a routine investigation for FBI profiler Evelyn Baine turns ominous when she's kidnapped by a dangerous cult of survivalists. As her worst nightmares become a reality, she begins to question what she's seeing. Because the longer she's inside their compound, the more she realizes this cult is not what it seems to be.

The next terrorist threat is right beside her...

As the FBI's Hostage Rescue Team closes in, Evelyn suspects she may have stumbled onto an emerging terrorist threat – and a leader who has a score to settle with the FBI. If Hostage Rescue breaches the compound, Evelyn's dead for sure. If they don't, the cult may unleash a surprise attack that could leave the whole country shattered.

Giveaway:
I’m giving away a copy of SEIZED to one lucky commenter!

Elizabeth graduated from the University of Michigan with a degree in English Literature.  She’s a member of International Thriller Writers, Mystery Writers of America and Romance Writers of America.  NYT bestselling author Tess Gerritsen said of her debut, "HUNTED is a nonstop, thrilling read that will leave you breathless, and Evelyn Baine is a sharp and gutsy heroine you'll want to follow for many books to come” and bestselling author R.L. Stine said, "Want to read a top-rate thriller? VANISHED had me turning page after page. Wow. When you talk about our most-promising new thriller writers, put Elizabeth Heiter on the list!"

More on SEIZED:
Read an excerpt and watch the trailer: http://www.elizabethheiter.com/seized.html

Read AVENGED for Free, a Chapter a Day


Giveaway ends 11:59pm EST Jan. 3rd. Please supply your email in the post. You may use spaces or full text for security. (ex. jsmith at gmail dot com) If you do not wish to supply your email, or have trouble posting, please email maureen@justromanticsuspense.com with a subject title of JRS GIVEAWAY to be entered in the current giveaway.