Where are you from?
Born and raised a girl.

A little about your self `ie your education Family life etc
Well you’ve heard the saying, Jack of all trades master of none?  That’s me! I’ve floated through every job known to man. Okay, that’s a slight exaggeration, but close. Right out of high school I worked at Sears Portrait Studio taking photos of children. Then I was the lead singer of a few bands; rock, punk, I even sang standards for awhile. While working my way through school to become a hairdresser, I worked for Lancome cosmetics. Mixed in between I did banking and was a waitress. I worked for Surfer Publications in an office capacity. Through all that I had no idea I was stockpiling experiences to become the writer I am today.

Tell us your latest news?
ICE SCREAM, the 4th book in The Thomas Family series

What inspired you to write your first book?
Well I had fantasized about it for years. I am an avid reader, of course.
Then when I learned I had dated a serial killer, I knew there was a book in there somewhere. But it wasn’t until two years later that I actually did something about it.
I was visiting my parents for the weekend and my father asked me what I would do if I ever won the lottery?  I told him I would buy a cabin in the mountains and be a writer.  He went and got his old laptop computer, handed it to me and told me not to wait.  I started writing the book which became SANDMAN the minute I got home.

When did you first consider yourself a writer?
When SANDMAN, my first published book, began selling on Amazon. It was amazing. I couldn’t believe all the reviews from people who actually liked my writing!

Do you have a specific writing style?
I’m a panster, I write by the seat of pants. I’m not one to do an outline, so I never know exactly where the book is going.

How did you come up with the title?
The title has been many things over the years; BLOOD IN THE SAND, LIFE’S A BEACH, THE SANDMAN, then finally simply SANDMAN (the name the media gave the serial killer in the book because he buried his victims in shallow graves on the beach.)

Is there a message in your novel that you want readers to grasp?
If there is, it’s simply that none of us really know every aspect of a person’s personality.

How much of the book is realistic ?
All of it. Everyone of books in The Thomas Family series could happen in real life.

Are experiences based on someone you know, or events in your own life?
SANDMAN is the most personal of my novels. All the crazy men that Meagan dated were based on real people.  I have enough dating horror stories to fill a book. I’ve had reviewers say that all those things couldn’t happen to one person, but they did and more. When they say unlucky in love, they were talking about me! LOL I mean seriously, how many women do you know can claim they dated a serial killer?

What books have most influenced your life most? a mentor?
Thomas Harris’ Silence of the Lambs is definitely a favorite. Up until I read that book, in the late 1980’s, there was no novel that delved into the mind of a serial killer and I found it fascinating.  I adopted his style of putting you into the mind of the killer through his memories of childhood for my book SANDMAN.
Patricia Cornwell’s Scarpetta series was a big influence on me. I enjoyed how real her characters and stories are.
Karin Slaughter.  Her books have grit and suspense. I think I identify mostly with her work.

What are your current projects?
Next up is SPRITS OF THE BAYOU which takes place in , featuring a younger Jon-Luc Boudreaux from SPIRITS AMONG US. I love this character, he has a fascinating talent as a psychic medium which he uses to solve murders. He’s also sexy as all get out with that Cajun accent and bad boy background.

Do you see writing as a career?
Yes, I do believe I’ve finally hit on my perfect career. I will be writing until my fingers no longer work, or maybe longer!

If you had to do it all over again, would you change anything in your latest book?
NO!

Who is your favorite author and what is it that really strikes you about their work?
Karen Slaughter, I love her realism.

Who designed the covers?
I design my own covers and have an artist bring the finished product to fruition.

Did you learn anything from writing your book and what was it?
I do a lot of research, so I learn so many things during the process. With ICE SCREAM, I completely immersed myself with everything Alaskan. As well as delved into the criminal mind for Annie’s character because that is her expertise. I found it most fascinating.

Do you have any advice for other writers?
Join Romance Writers of American-RWA. Join a chapter either online or in your nearest city. They have wonderful online classes to improve your writing, as well as a monthly magazine with tips on writing. Everything you need to know to be an author in this day and age you will find in RWA.  They help you with every step of your writing career. I wouldn’t be here today without it, nor would most of your Amazon bestselling authors.

Do you have anything specific that you want to say to your readers?
I can’t thank them enough. My readers are an amazing bunch, so passionate, bright and funny. I’m very blessed.

What makes you laugh/cry?
I love to laugh so hard that I cry. Playing CARDS AGAINST HUMANITY with my girlfriends does that to me every time!

Is there one person pass or present you would meet and why?
I would love to meet author Karin Slaughter so I could tell her how she influenced me.

What do you want written on your head stone and why ?
She made us laugh. Because laughter is the best gift you can give to anyone!

Favorite movies
Last of the Mohicans and Practical Magic

Color?
Cobalt blue is my favorite color. Whenever I come across glass made in cobalt blue I have to have it.

If you were not a writer what else would you like to have done?
Interior Decorator. I love designing. 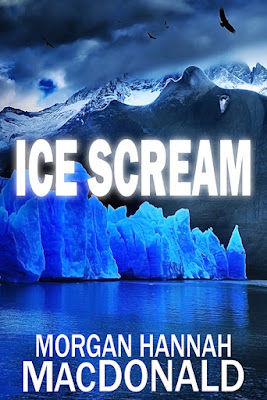 Somewhere in the vast Alaskan wilderness hides a psychotic monster. His methods are unlike any other serial killer to date. He likes his women cold, frozen to be exact. Once finished with a victim, he displays her like a twisted piece of art.

FBI Agent Annie Thomas is on leave after the loss of her fiancé, Matt Locklear. She has spent the better part of a year in his one-bedroom cabin in the wilds of Alaska. Lately she’s had the feeling of being watched. Is her self-imposed exile getting the better of her?

Homicide Detective Stone Wooshkeetaan has become a driven man. He would work 24/7 if he could, anything to prevent him from sleeping. He’s the one who found the mutilated body of his friend, Matt, an image that has haunted his dreams ever since.

It’s the day after Christmas and Draper’s Pond is filled with the sound of laughing children as they race around on the ice trying out their new skates. Little do they know a dark cloud looms ahead. Two little girls are holding hands and spinning as fast as they can until they break apart. One goes sliding into a snow bank. Once she rises, a blood curdling scream rips from her tiny throat, silencing the crowd. Directly below her is the body of a woman trapped under the ice; her hands up as if warding off an attack, her mouth frozen in a silent scream.

The woman’s death was not an accident and Stone is certain this isn’t the killer’s first victim. He asks Annie to help him prove it, but before long the investigation takes a sinister turn. The bodies of women start showing up all over the Mat-Su Valley looking like horrific ice sculptures. Now Annie and Stone are on the hunt for a sadistic killer hiding in a state over twice the size of Texas and largely comprised of uninhabited wilderness.  They must capture this beast before he finishes his perverse agenda and disappears…

Morgan Hannah MacDonald writes Romantic Thrillers that are NOT for the faint of heart. She's held many positions in her life including as a teller where her hands and feet were bound while armed robbers took over the bank.  Years later she discovered she'd dated a serial killer.  That's when she knew her destiny was in writing, because strange things do happen to real people. She belongs to RWA, International Thriller Writers and Sisters In Crime. She resides in , where she is busy working on her next novel.  She loves to hear from readers.

Write to her at morganwrites@yahoo.com and ask to be on her newsletter to be informed of her new releases.
Visit her website to view all her books.  www.morganhannahmacdonald.com