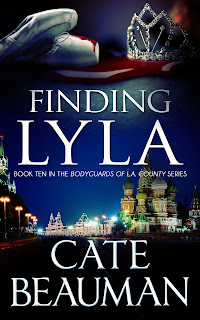 With over 4700 reviews and a 4.3 rating for the entire series, see why the Bodyguards of L.A. County is a multi-award winning series.

Collin and Lyla are forced to flee. They need to reach the border before it’s too late, but the odds are stacked against them in a country that wants them dead. With time running out, Collin formulates a risky plan that might be their only chance of making it out alive.
The Inspiration Behind Finding Lyla:

Typically I get my story ideas from crime documentaries or some sort of crime television program, but I can’t say that is the case for Finding Lyla. When I was coming up with ideas for this novel, I knew I wanted to tell a story about a hero that had struggled through some rough times and a heroine that had some unresolved issues of her own, but was soft, strong, and gentle all at the same time. During the summer months, I started paying close attention to the ongoing Russia/US conflict and Lyla and Collin assured me they wanted their story to revolve around an adventure that combined all of these elements together.
Read an excerpt from Finding Lyla:

Collin settled beneath the covers on his temporary bed as the dim glow of city lights radiated through the windows. He reached out, grabbing the remote off the coffee table he’d pushed off to the side, and flipped through several channels, stopping on SportsCenter. Scores and updates ticked by on the bottom of the screen, and he moved on, not all that interested in hockey stats.

He stopped again when the live footage from Saint Petersburg, Russia caught his attention. With the volume on mute, he searched for the closed caption button and sat up, reading the news report while the station switched back and forth between the newscaster and images of the police surrounding a trolleybus in the middle of a downtown street. The reporter spoke of a bomb discovered during the busy morning rush hour, mere miles from the plaza where dozens had been killed on New Year’s Eve. Luckily a citizen had been paying attention, and the explosive device had been deactivated, stopping another disaster.

Early reports were suggesting that the same rebel group responsible for the December thirty-first bombing, Chechen Freedom, had attempted to strike again. The news segment switched to snippets of the video released weeks ago, shortly after the slaughter of innocent civilians, where the masked men promised more violence in retaliation for The Federation killing one of their leaders. The man pointed at the camera, vowing to continue with his plans to destroy Russia until the regime relented and gave the Chechens back their country.
Sighing, Collin rubbed at his jaw. Why did he feel like he was walking into a losing situation? Everyday there was something new going on over there. If it wasn’t bomb threats and anti-American rallies, it was anti-Putin demonstrations outside the Kremlin walls, which often ended with tear gas and riot gear. And he and Lyla were only hours away from their late-afternoon flight.

The issues in Saint Petersburg weren’t necessarily one of his concerns. The city was a good nine hours away from their destination. It was the possibility of terrorist attacks in Moscow and Russia’s discord with the United States in general that had him on edge. The fact that Lyla was a dual citizen of two countries at odds had the potential to work for her…or very much against her. Only time would tell which way things were going to go, and they would be along for the ride while they waited to figure it out.

Did you enjoy the excerpt?  You can read the first chapter on my website, www.catebeauman.com, or you can finish the whole book with the links below! 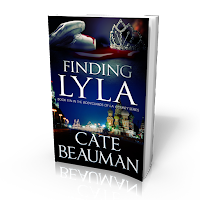 Music plays a HUGE part in my writing process. I typically listen to Pandora or YouTube while I create my stories and compile a collection of songs that I feel represent my characters or the situations they face as each novel unfolds. It’s a rare occasion that my creativity demands silence (And that’s a good thing. I’m a mother of two boys. Quiet doesn’t exist in my house.). I thought it would be fun to create a list of songs that ‘spoke’ to me while I wrote the Bodyguards of L.A. County series. You can listen to the “soundtrack” for each book on my website www.catebeauman.com.

The soundtrack, of sorts, for Finding Lyla:

International bestselling author Cate Beauman is known for her full-length, action-packed romantic suspense series, The Bodyguards of L.A. County. Her novels have been nominated for the National Excellence in Romance Fiction Award, National Indie Excellence Award, Golden Quill Award, Writers Touch Award, and have been named Readers Favorite Five Star books. In 2015, JUSTICE FOR ABBY was selected as the Readers' Favorite International Book Award Gold Medalist, while SAVING SOPHIE took the Silver Medal. SAVING SOPHIE was also selected as the 2015 Readers Crown Award winner for Romantic Suspense and FALLING FOR SARAH received the silver medal for the 2014 Readers' Favorite Awards.

Cate makes her home in North Carolina with her husband, two boys, and their St. Bernards, Bear and Jack. Currently Cate is working on Deceiving Bella, the eleventh novel in her popular Bodyguards series.