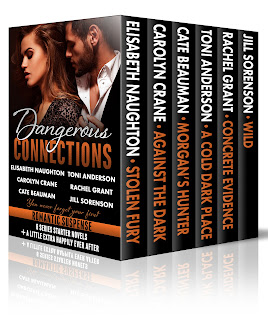 
box set
(n.) a set of related items, typically books or recordings, packaged together in a box and sold as a unit.

How many times have you seen a box set advertised for sale?  In every case we can recall, the box set has either featured the same author showcasing multiple books from her own collection or multiple authors related only by genre.  We wanted to do something slightly different to create a collection of such outstanding value that readers couldn’t resist.

We took the first book in six multi-award winning Romantic Suspense series, added exclusive epilogues, and put them in a box set together. And then we priced it at $0.99!

The inspiration behind Dangerous Connections began with author Rachel Grant.  “I don’t think I’ve ever seen a box set that had all first in series books before and felt readers would enjoy getting a set of series starters.”  Grant quickly recruited (AKA hounded) authors Toni Anderson and Carolyn Crane, and the trio brainstormed not only who to include in the box set, but also what the finished product would look like. “We discussed how (aside from the first in series aspect) we could make this set different than all the other bundles on the market. I suggested we write bonus epilogues that connect our stories as a treat for our fans.”  Authors Elisabeth Naughton, Jill Sorenson, and Cate Beauman jumped at the idea of being a part of this new twist on box sets, and the list of authors was finalized.

In DANGEROUS CONNECTIONS readers will get a little extra happily ever after that has the added fun of placing all the stories in one world.

To unearth a centuries-old secret, an archaeologist must team up with the rakish thief who’s stolen both an ancient relic and her heart. But they’re not the only ones on the hunt. To beat the other treasure seekers, they’ll have to partner up—because suddenly Lisa and Rafe are in a race just to stay alive.

Angel is an ex-safecracker forced into one last heist. Cole is a badass spy with big plans for his gorgeous thief…he'll make her pose as his girlfriend to help with a job. But as pretend passions turn real, Cole regrets drawing Angel into his deadly game.

Morgan Taylor's research team has been brutally murdered and she's determined to find out why. Not even her father's hired muscle can get in her way, but bodyguard Hunter Phillips is no pushover. Hunter has met his match in his feisty new client. His reluctant attraction to the green-eyed beauty is the least of his problems when he discovers they've crossed paths with a backcountry madman. 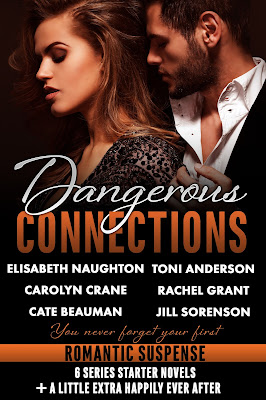 FBI Agent Mallory Rooney is hunting the monster who abducted her twin sister and begins to suspect there’s a vigilante operating outside the law. Former CIA assassin Alex Parker works for a clandestine government organization hell-bent on taking out serial killers before they enter the justice system. Alex doesn’t enjoy killing, but he’s good at it. He’s good at dodging the law, too—until a beautiful rookie agent has him wondering what it might be like to get caught.

Accused of stealing artifacts from a shipwreck, underwater archaeologist Erica Kesling is determined to clear her name. An undercover job with the buyer of the missing antiquities puts her close to her goal, until a sexy, charismatic intern with secrets of his own shows up, placing her heart -- and life -- in jeopardy.

Zookeeper Helena Fjord is passionate about animals. Humans, not so much. Especially not handsome, laidback security officer Josh Garrison, who likes to ruffle her feathers. She steers clear of his silly pranks and sexy smile–until disaster strikes.


BONUS ALERT: The dangerous connections between each of these series are revealed in never-before-seen bonus HEA chapters at the end of each full-length novel.

Elisabeth Naughton - Before topping multiple bestseller lists--including those of the New York Times, USA Today, and the Wall Street Journal--Elisabeth Naughton taught middle school science. A rabid reader, she soon discovered she had a knack for creating stories with a chemistry of their own. The spark turned into a flame, and Naughton now writes full-time. Besides topping bestseller lists, her books have been nominated for some of the industry's most prestigious awards, such as the RITA® and Golden Heart Awards from Romance Writers of America, the Australian Romance Reader Awards, and the Golden Leaf Award. When not dreaming up new stories, Naughton can be found spending time with her husband and three children in their western Oregon home. Learn more at www.ElisabethNaughton.com

Carolyn Crane - Hi! If you want to be the first to hear about fun freebies and releases, hop onto my alerts email list (eepurl.com/dt5bf). I love to write gritty, sexy, psychological stuff, whether it's romantic suspense or urban fantasy (or erotic & dark romance as my NYT bestselling alter ego author Annika Martin). My books have been nominated for and won RITA awards and have been up for Goodreads and RT Magazine faves of the year. Random House and Samhain have published past books of mine, but I now go the indie route. Hobbies include reading in bed (that's a hobby, right?) I also like run an I'm super passionate about helping animals. I live in Minnesota with my husband and two cats.

Cate Beauman - International bestselling author Cate Beauman is known for her full-length, action-packed romantic suspense series, The Bodyguards of L.A. County. Her novels have been nominated for the National Excellence in Romance Fiction Award, National Indie Excellence Award, Golden Quill Award, Writers Touch Award, and have been named Readers Favorite Five Star books. In 2015, JUSTICE FOR ABBY was selected as the Readers' Favorite International Book Award Gold Medalist, while SAVING SOPHIE took the Silver Medal. SAVING SOPHIE was also selected as the 2015 Readers Crown Award winner for Romantic Suspense and FALLING FOR SARAH received the silver medal for the 2014 Readers' Favorite Awards. Cate makes her home in North Carolina with her husband, two boys, and their St. Bernards, Bear and Jack. Currently Cate is working on Finding Lyla, the tenth novel in her popular bodyguards series. For information on Cate's new releases, monthly giveaways, and upcoming events, sign up for her newsletter at: http://www.catebeauman.com

Toni Anderson - Start reading Toni's award-winning, bestselling Cold Justice Series with A COLD DARK PLACE currently free on Amazon. You can sign up for her newsletter at www.toniandersonauthor.com* New York Times and USA Today international bestselling author, Toni Anderson, writes dark, gritty Romantic Suspense novels that have hit #1 in Barnes & Noble's Nook store, Top 10 in the Amazon, iBooks, and Kobo stores. Her novels have won many awards, and she's been nominated for the prestigious Romance Writers of America® RITA® Award. A former Marine Biologist from Britain, she inexplicably ended up in the geographical center of North America, about as far from the ocean as it is possible to get. She now lives in the Canadian prairies with her Irish husband and two children and spends most of her time complaining about the weather.  Toni has no explanation for her oft-times dark imagination, and only hopes the romance makes up for it. She's addicted to reading, dogs, tea, and chocolate.  If you want to know when Toni's next book will be out, visit her website (http://www.toniandersonauthor.com) and sign up for her newsletter. If you want to read other fascinating stories about life in a city that during winter is sometimes colder than Mars, friend her on Facebook: (https://www.facebook.com/toniannanderson). Toni donates 15% of her royalties from EDGE OF SURVIVAL to diabetes research--to find out why, read the book!

Rachel Grant - Four-time Golden Heart® finalist Rachel Grant worked for over a decade as a professional archaeologist and mines her experiences for storylines and settings, which are as diverse as excavating a cemetery underneath an historic art museum in San Francisco, survey and excavation of many prehistoric Native American sites in the Pacific Northwest, researching an historic concrete house in Virginia, and mapping a seventeenth century Spanish and Dutch fort on the island of Sint Maarten in the Netherlands Antilles. She lives in the Pacific Northwest with her husband and children and can be found on the web at www.Rachel-Grant.net.