Claimed by the Marquis


Hi, and a Happy New Year to Everyone!

I am so enjoying writing both my Regency Unlaced Series, and contemporary Alpha Series. Both series have strong Romantic Suspense in their storylines. Writing for both genres means that each book is totally fresh and new, and it’s a joy to get up every morning and start writing! 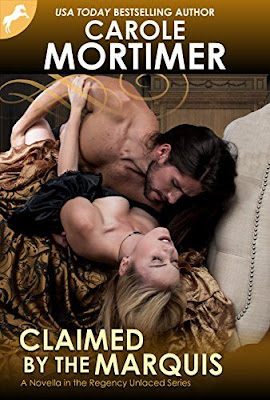 Claimed by the Marquis

Author’s Note: The stories in the Regency Unlaced series are steaming hot and the language sometimes explicit.

Lady Sally Derwent is an unusual Regency Miss, in that at the age of five and twenty, she is still unwed and determined to remain so. She has no desire to relinquish her freedom in order to become the property of some unworthy gentleman. Nor is she willing to part with the independence she acquired at the age of one and twenty, when she came into the fortune bequeathed to her by her paternal grandmother.

There is also the matter of the other part of the inheritance her grandmother left to her.

A scandalous collection of erotica. Books, paintings, statues, sketches, most of which make Sally blush to look at, but which fascinate her nonetheless.

Attending the wedding of a close friend, Sally takes one look at Nicholas Sefton, Marquis of Oxbridge, with his unfashionably long dark hair, piercing green eyes, and magnificently muscular body, and knows he is the missing piece from her vast collection of erotica. Not the man himself but the sketches she wishes to make of him. Nude.

Nicholas Sefton has long been bored with both the restrictions of society and the people in it. The war with Napoleon is over, and although he is the owner of several large estates, they are all being run very capably without his assistance. Likewise his townhouse in London. He is currently in need of a diversion in his life, something, or someone, to occupy or entertain him.

Lady Sally Derwent’s outrageous request, to sketch him naked, is beyond any amusement Nicholas might have imagined for his immediate future.

The lady herself is beautiful, the attraction between the two of them mutual, but she nevertheless declares herself unavailable. A situation Nicholas intends to change at the earliest opportunity.

Unrealized by either of them, someone close to them wishes Lady Sally Derwent dead. Sooner rather than later.

Will the Marquis and Sally become so caught up in their heated attraction to one another they remain unaware of the danger until it is too late?
***

I will be publishing a book almost every month throughout the year, so 2016 looks like being even more exciting than 2015!

What can I say, I simply love writing romances with the added danger of suspense!

Have a great January,
Carole
Amazon | Barnes and Noble

This book is also available on Kobo, ibooks, and Smashwords.

About Carole:
Carole Mortimer has written over 200 books in the contemporary and Regency genres, most recently the bestselling contemporary Alpha, and Regency Unlaced series.
Carole is Recipient of the 2015 Romance Writers of America Lifetime Achievement Award, a USA Today Bestselling Author, Entertainment Weekly Top 10 Romance Author, 2014 Romantic Times Pioneer or Romance, and in 2012 was recognized by Queen Elizabeth II for her ‘outstanding service to literature’.
She is very happily married to Peter, they have 6 sons, and live on the beautiful Isle of Man.