SO MUCH FOR THAT!

Congratulations to "Bea" and "Janet K.", the winners in Cindy's giveaway. Thank you to all who participated!

Being an author is tough. I know, I know, it certainly looks easy. I mean, we sit in our writing studio with a cup of coffee within reach and we write stories. Seems easy enough—other that the blood dripping from our foreheads from pounding it off the desktop.

I’ve been an independently published author since 2011. I published seven novels—with another coming in January, two children’s books, and a cozy mystery series in the works for the upcoming spring.

But I’ll let you in on a little secret—publishing a book is expensive! After we have finished writing the manuscript it has to be edited, re-edited, and then proofread. An editor costs approximately a dollar per page. Let’s keep the math simple. A novel that is two-hundred pages can cost up to six-hundred dollars just in editing (1st editor, 2nd editor & proofreader). A good cover designer costs anywhere from one-hundred to two-hundred-fifty dollars. Layout for your ebook and print copies—two-hundred to three-hundred dollars, and then the cost of marketing said novel is exasperating to say the least. 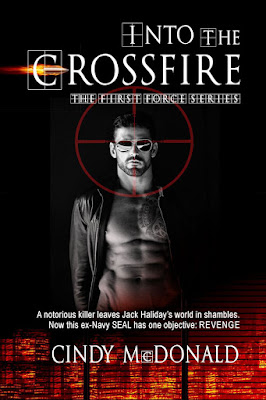 In March I was signed to a small publishing company. It was a four book deal—the first four books from my romantic-suspense series, First Force: Into the Crossfire, To The Breaking Pointe, Into the Dark, and the novel that I am writing for the series at this time, To the Brink. I was thrilled! My publishing costs had just disappeared! Yippee!

Almost immediately there was a new cover for Into the Crossfire. It was hot. I couldn’t take my eyes of it and the logo for the publishing company that now carried my books. Within a few weeks Into the Crossfire was re-released under their banner, and it shot to the top of the Amazon rankings. I couldn’t believe it! All the marketing that I had done over the two years that the book had been published never produced such results. I tweeted, I posted on FB, linkedin, blogged, virtual book tours, etc, etc--yet the book never drew such attention.

It was the same book, written by the same author, so why could the publishing company get the book ranked so high, while I could not? Who cares? It was working, and I was on cloud nine!

OMG! I’ve lost my books! I’ve worked for years writing and marketing and now I’ve lost the First Force Series! The books could possibly become assets to the publishing company. It could be years before I could reclaim the rights to my works—not to mention the royalties that I would not be receiving from the weeks that the book had spent at the top of the Amazon sales charts. At this point I truly didn’t care about the money—I just wanted my works!

Every five minutes or so a comment would come through the email thread from authors who were published with the company saying how sorry they were that the company was going under, how much they loved the owner. This was not how I was feeling at all. I was feeling cheated.

Luckily there was a clause in my contract that should the publisher go out of business the rights to my books automatically revert back to me. Thank goodness! I let out a huge sigh of relief and a friend worked diligently with me to get the First Force Series back up and running on Amazon.

Well…So much for that!

Yep…I’m back to being an independently published author under my own banner, McWriter Books. I’ve had several people say to me, “Cindy, you found one publisher, certainly you can find another.”

I supposed the old adage, once bitten twice shy, certainly describes how I’m feeling. Book #3, from the First Force Series, Into the Dark, will release in January—it’s a bit late, but I’m back in control, and it feels right.

Giveaway:
Leave me a lovely comment—I’ll be giving away 2 kindle copies: 1 of Into the Crossfire and 1 of To the Breaking Pointe** 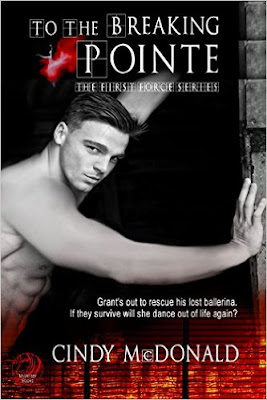 To The Breaking Pointe

A crowd had gathered in the reception room in the basement of the Mockba Theatre. The room wasn’t particularly large, yet it was quite elegant with red velvet swags hung in the archways, gilded crown moldings, and crystal chandeliers hanging from the ceiling. A bar was set up in one corner while a violinist played softly in another.

“It is ridiculous! An outrage! Dominik Potrovic should be included in the auction!” Ivan Belsky bit out in Russian. “A choice—that is what the contributors should have! We spend a lot of money at these parties!”

Natalia waved at the bartender for a glass of wine. “I have already explained this to you, Ivan. Dominik is in a relationship with our choreographer, Edvar. He is not available for the auctions.”

“Several of the dancers are married! Yet here they are—to be auctioned as the rest. I understand why Silja Ramsay is not present—she is an American, but there is no excuse for Dominik!”

“I do not understand. You always choose from the box filled with the ballerina’s shoes, not the male dancers. So why do you fuss?”

“I enjoy the girls very much. But Dominik—”

“If you are not happy with our selection of dancers, pull your bid and be on your way.”
Red-faced with frustration, Belsky let out a loud harrumph, and then stalked into the party just as Ballard Crafton rounded the corner.

“Where is Silja?” he asked Natalia as he searched through the party guests. The room was filled with men, a few older women, and most of the dancers from the Novikov Ballet Company. Only one dancer in particular was missing... Silja Ramsay.

“As always, there are plenty of lovely ballerinas here to choose from this evening, Ballard. Forget Silja for now. I will keep working to make her come around.

“No. I am tired of spending time with ballerinas that I don’t want. I only fantasize that she is Silja. I want Silja!” Ballard said.

Buy Links:
Into the Crossfire
To The Breaking Pointe

Giveaway ends 11:59pm EST Dec. 17th. Please supply your email in the post. You may use spaces or full text for security. (ex. jsmith at gmail dot com) If you do not wish to supply your email, or have trouble posting, please email maureen@justromanticsuspense.com with a subject title of JRS GIVEAWAY to be entered in the current giveaway.