Do you already have Christmas decorations and presents for sale in your area? We do, and I’m one of those people who love to see it. I love everything about Christmas, in fact. Even the shopping for those difficult presents! One year we left the decorated tree up past 12th night because my editor belatedly asked me to write a Christmas book and I wanted the right ‘atmosphere’ in which to write it. My husband and I liked the tree so much we left it up all year—probably bad luck or something, but we enjoyed it. And goodness knows what June visitors thought about seeing that decorated Christmas tree in our lounge, because they were all too polite to say anything, and we had totally forgotten it was there.

In keeping with Christmas, November 4th is publication day for The Duke’s Mistress, the first book in my bestselling Regency romantic suspense series, Regency Unlaced. Hot and steamy love stories, set in the Regency period, with an added dash of danger. 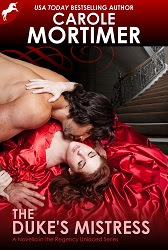 The young widow Lady Dorothea Fitzroy is bored with her life. Most especially so with her role as mistress of her older brother’s household, and the endless round of society engagements this forces her to endure.

Thea decides she wishes to become a mistress of another kind entirely, that she needs a secret and passion lover to add excitement and spice to her humdrum life.

Enter Julian Remington, the arrogant and haughty Duke of Blackmoor, who has no interest in taking a mistress, for his bedroom or his home. The duke is jaded, cynical, and most of all distrustful when it comes to women. With good reason. One woman in particular has caused him too much grief for him to ever trust another.

But Thea and Julian are about to be caught up in a passion for each other that blazes so fiercely, so out of control, that they’re both blind to the danger stalking them through the foggy London streets. A woman from Julian’s past who wishes to see Blackmoor suffer as she has suffered, and now sees Thea Fitzroy as the means by which she might achieve that revenge. 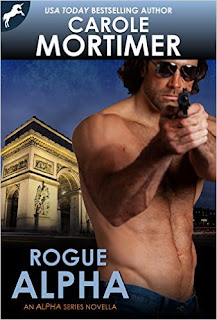 The second book in the Regency Unlaced series, Claimed by the Marquis, is now available for pre-order and will be published on January 29th. The stories in this Regency romantic suspense series will be published alternate months through 2016 with my contemporary Alpha series.

The 7th book in the Alpha series, Rogue Alpha, will be released December 4th, and is now available for pre-order.

Have a great November!
Carole


About Carole:
Carole Mortimer has written over 200 books in the contemporary and Regency genres, most recently the bestselling contemporary Alpha, and Regency Unlaced series.
Carole is Recipient of the 2015 Romance Writers of America Lifetime Achievement Award, a USA Today Bestselling Author, Entertainment Weekly Top 10 Romance Author, 2014 Romantic Times Pioneer or Romance, and in 2012 was recognized by Queen Elizabeth II for her ‘outstanding service to literature’.
She is very happily married to Peter, they have 6 sons, and live on the beautiful Isle of Man.
Posted by Maureen A. Miller at 12:30:00 AM