How Simon Dunn Took Over the True Lies Series

Did you ever meet a guy in your life that just dominates every situation he’s in? A guy just like that popped into my head as I wrote “Untrue Colors” as a secondary character, a fun brother to the hero. Simon Dunn. Yet, Simon wanted more. He was an embedded MI6 operative who lived life and death situations and when he wasn’t working, he played hard.
He took control of the book, steal scenes in his own POV, pushing his subplot into the forefront until I finally cut him off. He needed to back down. Luckily, my editor pulled his POV from the black moment and allowed Henry, the actual hero of the book, to rescue Alex after her own rescue attempt failed.
Now it’s Simon’s turn in his own story in “True Deceptions,” and he’s just as aggressive about taking over the plot. Luckily, it’s his plot to dominate. He also tries to dominate Cassie, the heroine, and at first, he totally runs her over. Luckily, the woman has internal strength that is more than a match for him. By the end of the book, she controls his heart.
I’m currently editing the third book in the series, “True Peril” and who wants front billing? Simon, again. He not only blackmails his best friend into working for him, but he steals away the man’s girlfriend. Don’t worry though, his heart never leaves Cassie.
Overall, I’ve had a blast with Simon. I can’t wait to see how messes with my stories in the future!
And go ahead, and friend Simon Dunn on Facebook. He didn’t want me controlling his PR so he took it over himself. 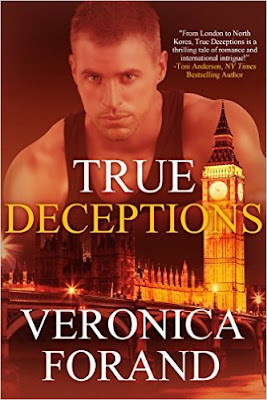 An Excerpt:
Her suitcase with her pajamas and toothbrush sat on the floor in the bedroom. His bedroom.
She got up and went to the bedroom, then opened the door and tiptoed into the dark room. The light from the hall illuminated a path from the door to the center of the bed. Simon was stretched out atop it, wearing boxer shorts and nothing else. His jeans and T-shirt lay in a heap on the floor. He watched her in silence, hands resting behind his head.
If the devil came to tempt her, he’d arrive in the form of Simon Dunn.
She’d seen hundreds of hot guys while surfing the beaches in Southern California. Simon, however, was not only graced with abs of steel, arms of well-defined muscle, and a handsome face, his body appeared molded by Roman gods for purely hedonistic activities. His expression conveyed a bored resignation with life. His tightly cropped hair gave him a military appearance, and his eyes were the bluest eyes she’d ever seen, even bluer than her own.
“Are you standing in my room for any particular reason, or simply sightseeing?” His deep voice caused her insides to vibrate as though standing near a subwoofer.
“Suitcase. I need my suitcase.” She turned away from him and grabbed it. “I’ll leave it in the hall closet.”
“Fine.”
She paused at the door, waiting for him to say “good night,” “nice to meet you,” or even “I hate your presence in my flat.”
“Cassie?”
She turned around and smiled. “Yes?”
“Shut the door when you leave.” He rolled onto his stomach and pulled the pillow over his head.
“True Deceptions” is available in the following locations:
Amazon US
Amazon UK
Amazon AU
Barnes and Noble
Kobo
iBooks
About the Veronica Forand
A Golden Pen winner in romantic suspense and a triple finalist in the Daphne Du Maurier Award for Excellence in Mystery/Suspense, Veronica Forand is an attorney and a novelist. She's lived in Boston, London, Paris, Geneva, and Washington, DC and currently resides near Philadelphia. An avid traveler, she loves to roam across continents with her husband and kids in pursuit of skiing, scuba diving, and finding the perfect piece of chocolate.
Read more about her upcoming releases and appearances at http://www.veronicaforand.com/.