Congratulations to "Christy L.", the winner in Tamara's giveaway. Thank you to all who participated!

Thank you for having me on Just Romantic Suspense. My name is Tamara Lush, and I'm a new fiction writer. My book, Hot Shade, was released Sept. 30 with Boroughs Publishing Group. 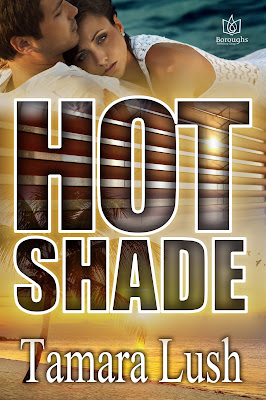 The idea of this book has swirled in my brain for a few years. As a journalist, I've covered some of the most tragic news stories imaginable. The Haiti earthquake. The Gulf oil spill. Too many murders to count.

I wanted to tell a story with a happy ending.

And yet, I was fascinated by darker tales of intrigue and suspense.

And I also love the New Adult genre, with its coming-of-age stories.

What to do? How to combine these elements in my head?

I'm a longtime romance reader and love books with intrigue and sensual tension. I also couldn't shake off my years of covering crime in Florida as a journalist. I began to wonder: What would happen if a young, rookie reporter met a hot Italian man while covering a story, then fell in love? What if the Italian was hiding a big secret? What if the Italian was also a journalist, but couldn't tell anyone because he was running from danger? What if danger was lurking in the bright Florida sun, not far from where the hero and heroine were falling in love?

My main inspiration was a real-life Italian journalist named Roberto Saviano. He wrote the investigative book, Gomorrah (which was also made into a movie). After he published the book, he received death threats from the Mafia and he's since gone into hiding, with bodyguards. He's an incredibly brave man, and I wanted my hero, Luca Rossi, to exhibit the same kind of crusading, truth-telling qualities.

I also wanted Luca to be confronted with the one thing he wants, but doesn't think he deserves because of his circumstances: love.

The heroine, Skylar Shaw, is like many young reporters. Ambitious, a little naive to the ways of the world and eager to learn. She's also grappling with body image issues and a past abusive relationship.

My Boroughs Publishing Group editor, Chris Keeslar, helped me bring out the nuances in the hero and heroine. We also talked a lot about the book's setting and how Florida is almost another character in the novel. As a romantic suspense, Hot Shade has some of the qualities of the Florida noir genre: sun-soaked, sexy and ever-so-slightly cynical. And yet, it's a romantic story of two people who find true love in the tropics.

This is my first novel, and it was so much fun to write. I hope readers enjoy the story! I would like to give one free, signed paperback of Hot Shade to one lucky winner in the comments -- I'll pick someone at random!

To find out more about me and my debut novel, Hot Shade, you can visit me at www.tamaralush.com.

She grinned and rummaged through her straw tote bag then handed him a business card. Plucking it from her fingers, Luca studied every inch of her face. Even the freckles on her nose were adorably sexy.

He glanced down and read her card aloud. “‘Skylar Shaw. The Palmira Post.'”

She took a pen and notebook out of her bag. The pen’s end was frayed with bite marks. Luca arched an eyebrow. He longed to flirt but knew he shouldn’t, for all sorts of reasons.

“How long have you been a reporter, Skylar Shaw?”

“Three months, not counting my internship. I got this job at the newspaper right after graduating from journalism school.”

He looked at her, then at her card and back at her. She tapped the end of the pen on her bottom lip and opened her mouth to chew on it. Her lips were plump, and Luca entertained a fantasy of rubbing his thumb over them. How he’d love to play with this girl. How bad an idea was it to ask her inside for a glass of wine?

No, he couldn’t do that. He could see she was in the throes of reporting a story, and although her grin was flirtatious, her eyes were intent. Serious. And he shouldn’t be seducing reporters. Not in his situation.

He managed a tight smile and tried to focus on her forehead, but her blue eyes were like magnets and he held her gaze for a few unblinking moments. “Congratulations on your graduation and on getting a job in a dying industry at the end of a global recession. Now, if you don’t mind—” 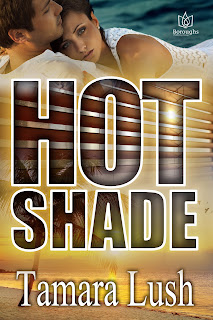 She laughed and pointed at the homes. “Well, congratulations to you, on settling in a gated retirement community at such a young age. We all can’t be so lucky.”

He tilted his head, puzzled. Women usually were flirtatious with him. Not snarky.

She smiled sweetly. “Sorry. Couldn’t resist. If you tell me anything off the record about the plane crash, I won’t put your name in the paper. I can use you as an anonymous source. Do you know anything about the person who helped the injured man? Did you see anything?”

She was persistent, and he admired that. Both in a journalist, and in a woman. And yet, no way would Luca reveal that he’d aided the plane crash victim. He wanted publicity, and reporters, to stay as far away as possible. Especially this one.

Giveaway:
Tamara will be giving away a signed print copy of HOT SHADE to one lucky person leaving a comment.

Giveaway ends 11:59pm EST Nov. 16th. Please supply your email in the post. You may use spaces or full text for security. (ex. jsmith at gmail dot com) If you do not wish to supply your email, or have trouble posting, please email maureen@justromanticsuspense.com with a subject title of JRS GIVEAWAY to be entered in the current giveaway.