The Truth Is So Much Stranger Than Fiction

Congratulations to "Erin", the winner in Julie's giveaway. Thank you to all who participated!

As a medical lab technologist writing a bioterrorism series I often get asked if I use real events or personal experiences in my books.

Nope. Not because I don’t have any novel-worthy stories to tell, but rather because few people would believe them, and fiction has to be believable. Readers are smart. The author has to build a world that makes sense, filled with characters who do things for logical reasons. They won’t tolerate characters who do something so stupid it could hurt them, cause permanent injury or even kill them.

In real life, people do stupid things all the time.

Here’s an example from earlier this year: Live anthrax samples sent out to nine states and a base in South Korea by US military laboratory — http://ind.pn/1NeHf6B Oops!

The Huffington Post has an ongoing section just for stupid criminals: http://www.huffingtonpost.ca/news/stupid-criminals/

Then there’s the Darwin Awards, an award you only get if you do something incredibly stupid and die as a result. http://www.darwinawards.com/

Giveaway:
Have you ever witnessed an act of incredible stupidity?
One commenter will win an ebook of their choice from Julie’s backlist! 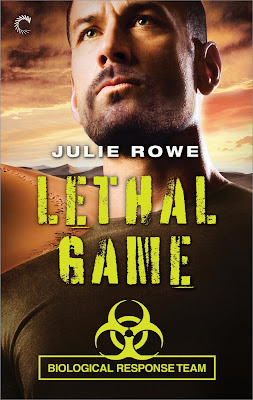 As the nation’s youngest virologist and hematologist, Captain Sophia Perry has always been one step ahead of her peers. But there’s one thing she can’t beat—cancer. She wants to make a difference in the time she has left, so when she’s sent to investigate a breakout at a Syrian refugee camp, she goes, saying nothing of her diagnosis. But saving the masses isn’t easy when the man tasked to protect her is so irresistible.

Communications Sergeant Connor Button is back on active duty after a deadly explosion, but he doesn’t feel whole again until he meets Sophia. Assigned to keep her safe, he’s prepared to die for her, but for the first time in months he truly wants to live—if only she wasn’t so determined to put them both in danger.

With a secret to keep and nothing to lose, Sophia is determined to find the source of the breakout at any cost. Violent attacks on the camp convince her that someone wants her to pay dearly. But as Sophia’s health deteriorates, Connor must find a way to help her defeat her enemies before her body defeats her.

Giveaway ends 11:59pm EST Oct. 12th. Please supply your email in the post. You may use spaces or full text for security. (ex. jsmith at gmail dot com) If you do not wish to supply your email, or have trouble posting, please email maureen@justromanticsuspense.com with a subject title of JRS GIVEAWAY to be entered in the current giveaway.