Congratulations to "Colleen C.", the winner in Dee's giveaway. Thank you to all who participated!

First I want to thank Maureen for having me at JRS. I always love her house. The topic today is redemption, with a bit of adventure on top. My question to you is, how bad do you like your bad boys? I’m talking specifically about your heroes, not your villains. Take for instance your tattooed or motorcycle-riding hero. Those things alone don’t make a hero bad, yet that’s how they are perceived. What about the hero who acts less than heroic? He’s probably not considered a hero at all. But what happens when that man changes? What happens when that guy has a reason for acting the way he did?

When you think about it, it makes sense. None of us know what someone else might be going through so until we know, it wouldn’t hurt to give them the benefit of the doubt.

Leo is one of those guys. He made a mistake a long time ago and it’s haunted him for years. Acting a certain way gave him a distance from people he felt he needed and wanted, but that mistake sat with him for so long that it helped change his way of thinking. (So did the love of a good woman!) But when he lost everything he owned, you can bet it changed him. Leo knows he’s in trouble in Imminent Danger (Adrenaline Highs #5), but the reader –and Leo- don’t see the fallout until Always Dangerous.

Here’s a little excerpt from the book:

Leo had been up most of the night working on the numbers for his movie, so she felt confident that she wouldn’t wake him when she left for her hike. She needed some serious space from the guy. He jumbled every one of her senses. He was a man who didn’t want commitment and she was a woman who did. Her head knew he wasn’t the guy for her, but her heart didn’t care. And her duplicitous body…forget about it. Her heart pounded like a damn drum whenever he was around, her eyes always searched him out and her hands ached to touch. Stupid. Stupid. Stupid.

She’d just finished writing him a note when he showed up in the kitchen, looking bleary-eyed, rumpled and gorgeous as hell in shorts…and only shorts. His washboard abs made her mouth water for a taste. For all the hours she’d spent last night hardening her heart to this man, all it took was one look for the traitorous organ to pound out of control.

His sleepy eyes narrowed as he took in her outfit. “What the hell are you planning now?”
She ignored his tone and the way it made her girl parts tingle. “I’m going on a little hike. If you don’t see me back here tonight, then call the fire department again. I may need rescuing.”

He shook his head slowly as his tired eyes opened wider. “Don’t even think about it.”

“Uh oh. Too late.” She zipped past him, but he caught her arm and twirled her about face.

Leo exhaled a measured breath. “Nothing I say is going to stop you, is it?” She shrugged a shoulder and opened her mouth to tell him she was a grown woman, perfectly capable of taking care of herself, but he cut her off. “Fine. Give me time to get dressed and pack us some provisions.” He gestured to the tiny pack she had over her shoulders. “That doesn’t hold nearly enough water for the amount of energy we’ll be expending.” He leaned forward and touched his forehead to hers. “Give me ten minutes or else.”

Kim smothered a grin. He was kind of funny when he ordered her around. “Or else what?” She kept a straight face. Sometimes she liked goading him just to see what he would do.

“Or else when I see you next, I’m going to put you over my knee and spank that sweet ass of yours.”

“Don’t knock it ‘til you’ve tried it.” He pulled away. “Ten minutes starting now. You better be here.”

The question is, will you be there? Will you give our hero another chance? Have you written him off from the beginning or are you willing to hear his side of the story?
I’d love to know.

Giveaway:
I’m giving away a digital copy of any back list book in the Adrenaline Highs to one commenter.  (P.S. Dangerous Race –the 1st book in the series- is $1.99 for a limited time!) 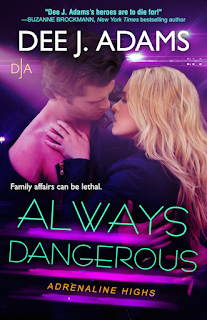 ALWAYS DANGEROUS
Leo Frost has lost his house, his car and possibly his acting career. Releasing an independent film is his only hope of paying for his sister’s twenty-four/seven care, but he’s got to finish it first. The last thing he needs is a curveball from the one woman who could break his focus with a look, a smile and the most unexpected news of his life.

Kim Jacobs wants it all—a career in a big city, a husband and a family, but a tryst two months ago with one of Hollywood’s biggest stars leaves her pregnant. Knowing Leo doesn’t want kids or a wife, Kim decides to make her own happily-ever-after with the help of a recent inheritance. All that’s left is to tell the man and move on.

Kim’s short visit to L.A. turns deadly with a series of mysterious attempts on her life. Suddenly Leo not only has to save his career, he has to find out who’s trying to murder the lady who is stealing his heart. As an actor, danger was staged and nothing was at stake, but now the threats are all too real. If Leo wants a future and a family with Kim, he has to prove he can do more than play a hero onscreen, he has to be one in real life.

Giveaway ends 11:59pm EST Oct. 9th. Please supply your email in the post. You may use spaces or full text for security. (ex. jsmith at gmail dot com) If you do not wish to supply your email, or have trouble posting, please email maureen@justromanticsuspense.com with a subject title of JRS GIVEAWAY to be entered in the current giveaway.
Posted by Maureen A. Miller at 12:30:00 AM