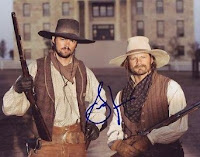 What do John Wayne, Clint Eastwood, Robert Duvall, Tommy Lee Jones, Steve Zahn and Carl Urban have in common. Yes they are actors. Okay, they’re some of my FAVORITE actors who have portrayed Texas Rangers. Rangers have been the star subjects of the screen since the beginning of movies (1910: The Ranger’s Bride). In fact, it’s thought that the movie portrayal of good guys in white hats comes from the tradition of Texas Rangers wearing white hats.

REAL WHITE HAT HEROES  ~  No matter what’s portrayed on the screen, you can do an internet search for a record of corrupt or prosecuted Texas Rangers. You’ll find…  insert crickets chirping. Quite honestly, this makes it much harder to write these true Texas heroes. No reported internal corruption or officers who betray their duty for money. So developing four stories for Harlequin Intrigue and staying true to the organization that I admire was challenging.

BULLETPROOF BADGE is the first of the TEXAS RANGERS: ELITE TROOP series (available for pre-order if you’re interested). One of the devices I used to keep this book exciting… My Texas Ranger hero is accused of murder. As a result, he can’t rely on Company or law enforcement for help. He has to protect the only witness and find the actual killer.

I think it’s a toss-up between THE LONE RANGER and WALKER, TEXAS RANGER for the most famous television series. When we visited the Hall of Fame in Waco, half the silver screen room is dedicated to Chuck Norris. He tried very hard to make his television series true to the modern day Texas Ranger. He was made an honorary Ranger (see it here) and speaks about wanting the series to reflect the traditional values of the Rangers.

My father loved WALKER, TEXAS RANGER. It was one of the few things he’d record and keep for his VCR. An episode was even filmed using my daughter’s elementary school. I missed it when it originally aired (too busy running three kids everywhere). But I do watch the reruns. And I’ve seen many of the movies and television series made about rangers. I accidently (I swear it wasn’t on purpose) named my first Texas Ranger hero Cord. When I realized that I had used the same first name (Cordell Walker), I wrote WALKER into the story and said the character was named AFTER my hero because the hero’s father had consulted for the show.

I HOPE that my Texas Rangers series for Intrigue is fictional, yet true to the traditional values these men who serve my state have set. Each story stands on its own, but all are woven together because the characters are from Company F (based in Waco). Of course, all my stories end with a happily ever after…I wouldn’t have it any other way.

For the complete list of Texas Rangers on the Silver Screen check out
the Texas Ranger Hall of Fame and Museum.
~ ~ ~

ANGI MORGAN writes “Intrigues where honor and danger collide with love.” She combines actual Texas settings with characters who are in realistic and dangerous situations. Angi's work has been a finalist in the Bookseller’s Best Award, Romantic Times Best First Series, Carolyn Readers Choice, Gayle Wilson Award of Excellence and the Daphne du Maurier.
Website   Facebook   FB Fan Page
Twitter @AngiMorganAuthr
Book Trailers on YouTube    Book Buy Links
Check out A Picture A Day or #WhateverYourInto
Follow me on Amazon   Catch my Giveaway
~ ~ ~
GIVEAWAY
Leave a comment and enter my BIRTHDAY Rafflecopter drawing for a $20 Gift Card.


Do you have a favorite Texas Ranger character on television or in the movies?