Congratulations to "Jana G." and "Emily B.", the winners in Tiffany's giveaway. Thank you to all who participated!

Military heroes. I love them and many of my characters are former military men. Both Parker and Ryker—heroes in my Risky Business Series—are former Marines. It’s a great background to use for the romantic suspense genre because it obviously gives the hero experience with weapons and combat without actually putting them in a law enforcement career. But I also think it’s something we see a lot of in today’s romance novels across all genres more so than say ten or fifteen years ago. Why is that?

I’m going to go into perhaps controversial waters and say we see more readers wanting military and ex-military heroes in romance (more Alpha males as well) because our culture doesn’t allow for men to have that role any longer. For years, women have told men we need them to be more sensitive, to be in touch with their feminine side, to not be so “manly.” So much so that now we see men wearing skinny jeans, agonizing over the extent of their “manscaping,” and ordering nonfat chai tea lattes from Starbucks.

What do you think? Have women and/or our culture not let men be “manly” any more so readers turn more and more to the ultra-manly Alpha male military hero as their romantic ideal? And who’s your favorite military or ex-military hero? (I have to say I have a soft spot for the movie The Expendables, with all its not only former military men but former 80s action stars)

Giveaway:
Tiffany will be giving away a $10 Amazon gift card + ebook of PLAYING DIRTY to two lucky people leaving a comment or email entry! 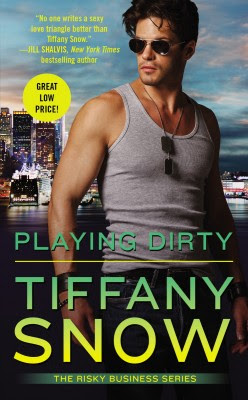 Both Ryker and Parker are determined to protect Sage from a brutal enemy who'd use her to pay for their mistakes. Yet when the usually on-point Ryker is distracted by ghosts from his past, Parker seizes his opportunity to get Sage's attention--and keep it in ways beyond her wildest dreams.

Now, caught between a mobster out for revenge and two men who were once best friends, Sage must play to win--even if it means getting dirty. . . .

Start the RISKY BUSINESS series out with...

THIS KIND OF BUSINESS CAN ONLY BE PERSONAL

Sage Reese lives for her job. More precisely, she lives for her debonair boss, Parker Andersen. Sage handles everything for Parker, even as she fantasizes about the one thing that isn't in her job description: him. But when a high-stakes account crosses the line from shady to deadly, a tough cop starts giving Sage the attention she wishes Parker would...

Detective Dean Ryker couldn't be more different from Parker. While Parker wears expensive suits like a second skin and drives a BMW, Ryker's uniform is leather jackets and jeans... and his ride of choice is a Harley. While Parker's sexiness is a reserved, slow burn, Ryker is completely upfront about what-and who-he's after. And Sage tops his list.

Now, as Ryker digs deeper into the dark side of Parker's business, Sage finds herself caught between two men: the one she's always wanted-and the one who makes her feel wanted like never before . . .

About the author:
Tiffany attended the University of Missouri – Columbia, attaining two degrees in History and Social Studies Education. After working many years as an instructor and consultant in the Information Technology field, Tiffany now writes full-time.

Tiffany loves to read and has been reading romance novels since she was way too young to read such things. She has an unhealthy obsession for all things Doctor Who, prefers Pepsi to Coke and Absolut to both, thinks men who drink girly cocktails are wusses, has learned to never stop believing in her beloved St. Louis Cardinals, and can recite the entire scripts of When Harry Met Sally and Apollo 13. George Washington is cool, Bon Jovi still rocks the house, and Bruce Willis is the ultimate alpha-male hero.

Married with two wonderful daughters, Tiffany and her family make their home in Kansas City, Missouri, not far from where she was born and raised in St. Louis, Missouri.

Giveaway ends 11:59pm EST Sept. 27th. Please supply your email in the post. You may use spaces or full text for security. (ex. jsmith at gmail dot com) If you do not wish to supply your email, or have trouble posting, please email maureen@justromanticsuspense.com with a subject title of JRS GIVEAWAY to be entered in the current giveaway.
Posted by Maureen A. Miller at 12:30:00 AM