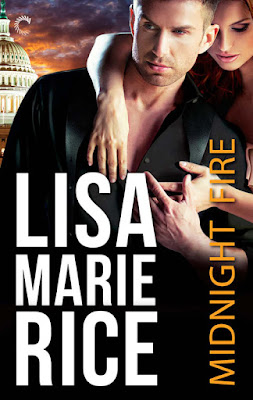 Summer Redding thought the blindingly handsome jock who'd loved and left her years ago had died in the Washington Massacre. She grieved for her lost golden boy as the rest of the country mourned their dead—until she comes home to find a very alive Jack Delvaux waiting for her with a devastating secret that turns her life upside down.

No longer the carefree man he was in his youth, this Jack is dark, hard and dangerous; a fifteen-year veteran of the CIA hungry for answers…and hungry for her. The rich, good-looking charmer who broke her heart once before would have been easy to resist, but this man, this powerful man? Summer needs him, and he knows it.

When Jack's mission uncovers evidence of government involvement in the Massacre—and plans for another attack—he's primed for revenge. But he has more than vengeance to live for now, and when Summer's life is threatened, it's nearly Jack's undoing. Someone taking shots at his woman? That's a dead man walking.


Order MIDNIGHT FIRE before September 30 and get
MIDNIGHT VENGEANCE for free!


EXCERPT:
She moved into the living room to switch on a few lights and froze.

A man. A very big man was standing there, unmoving.

Oh God! A nightmare! Somehow someone had gotten past her layers of security. That took knowledge and focus and that meant nothing good.

She kept a loaded gun in a small safe on the opposite wall. The man was standing between her and the safe, so the gun could have been on the dark side of the moon for all the good it did her.

He was huge, shoulders a yard wide in outline, head shaved, enormous hands loose at his sides. With the bookcase lights at his back, his face was in shadow. All she could see were hard planes. She felt, more than saw, the intensity of his gaze. It was like being in a dark beam of light.

She’d taken self-defense courses and could hold her own against a normal-sized man but this guy was not only huge but built. Those enormous shoulders tapered down to a lean waist, the neck muscles strong even in shadow.

Summer’s heart hammered as she ran through the options open to her. It went fast because she had none.

The gun was behind him. She had plenty of sharp knives but they were in a butcher block at least ten steps behind her. He could cut her off in a second if she made a dash for the kitchen door. And foolishly, foolishly, her cell wasn’t in her pocket as it usually was. It was in her purse, on the kitchen counter, out of reach.

About the only thing she could do was scream, even knowing that one of the selling points of the condo was noise insulation. Her throat was closed up and she could barely breathe, like those nightmares where you couldn’t scream, couldn’t run.

She took in a deep breath and it froze in her throat.

“Summer,” the man said in an unusually deep voice.

Her hand went to her throat where it felt as if someone had grabbed her, was throttling her. She couldn’t breathe.

This was personal then. Not some random stranger who’d broken into her home.

“Don’t be afraid,” he said and stepped forward.

Something about that voice…

Another step and the light from the kitchen illuminated his face.