Congratulations to "Lynn B.", the winner in Jackie's giveaway. Thank you to all who participated! 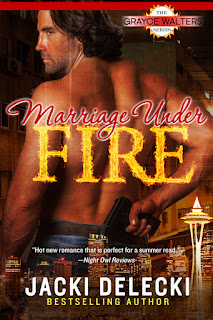 I frequently feature actual Seattle landmarks in my Grayce Walters series, partly because I love my home city and partly to create a sense of realism for readers who are familiar with this region. Part of the storyline for Marriage Under Fire, the September 15 release in my contemporary romantic suspense series, was inspired by Seattle’s local refugee and immigrant community.

One of my primary research resources for this was the Refugee Women’s Alliance (ReWA), an organization that provides assistance and support to refugee and immigrant women and their families. ReWA has been active in Seattle’s multicultural community for more than 30 years and their work is life changing. Here are some of their accomplishments and compelling facts:

• Services are available in more than 60 languages/dialects
• More than 30 percent of King County residents are foreign-born, based on the 2010 Census
• ReWA helps refugees learn English, find housing and jobs, and gain U.S. citizenship
• Services from ReWA also include domestic violence aid, youth & senior programs, and meals
Yet another reason I love being a romantic suspense author is being able to showcase incredible organizations such as this that make a difference in the community.

Giveaway:
Here’s an excerpt from Marriage Under Fire, coming September 15. Comment for a chance to win a digital copy!

Forret showed a picture of a young man in his mid-thirties with dark eyes and a beard. “This is Abu Abdul Hamman. He lives in an apartment complex in the Rainier Valley with his sister and mother. He owns a restaurant close to his home called Afghan Kebab.”

Hunter shook his head. “He served with the ANA. Why the change in political allegiance?”

“We believe that his father’s death by an American drone radicalized him, and that Abu Abdul Hamman is the link between JI and ISIS in Seattle. The Task Force didn’t have any solid leads until this connection with Billow. The man is squeaky clean.”

The colonel sat forward and watched Maddy. “Jeffers, we need your help.”

Maddy sat up straight in her chair. “Yes, sir. Whatever is necessary.”

Hunter’s insides thumped with fear. Maddy was totally competent, but she had just come off assignment and was supposed to be on medical leave for her PTSD—not that she’d ever admit to needing help.

The colonel nodded to Forret and the man continued. “We want you to do the work you were trained to do in Afghanistan. We will place you at the Women’s Refugee Center, where Abu’s sister and mother attend English classes with other women. With your knowledge of both Pashto and Dari languages, you’ll be able to infiltrate their world, gain their trust, and get us access to the brother.”

Maddy beamed. Her blue eyes sparkled, and she was grinning while Hunter’s gut churned with emotions he refused to acknowledge. He had known this was the end of his work with Maddy, but the new assignment sounded too risky. In Afghanistan, Maddy engaged with the women to gather intel, but there had been a whole platoon of Marines to keep her safe. Who was going to keep her safe in Seattle? Darney, with his freckles and round, cherubic face, who barely looked twelve years old?

“Your cover is that you have recently returned from working with the International Committee of the Red Cross,” Forret continued.

Hunter sat back in his chair, pretending a nonchalance he in no way felt, and waited for the colonel to assign Maddy to work in the field with Darney.

The colonel turned abruptly in his swivel chair. “Hines, I want you on this assignment, too.”

The roar of Hunter’s pounding heartbeat thundered in his ears. Heaven and hell all mixed together.

“Based on your high praise of Jeffers on the last assignment, it’s obvious you work well together.”

Hunter saw Maddy’s head jerk up. Did she really believe he was such an ass that he’d criticize her performance? Guess so, by the way her mouth slackened and she tilted her head and stared at him.

He suddenly noticed the silence in the room while everyone watched and waited.
The colonel kept looking between him and Maddy. “Is there a problem, Hines?”

“Good. Forret, tell them what you’ve set up.”

“We’ve rented a house on the same street as the apartment complex where the Hamman family lives. You’ll monitor their activities from the house. We’re not sure of risk, but we’re taking this assignment very seriously, Jeffers. Hines will be doing surveillance and will be your backup. This is a joint operation with everyone known to God as part of the team. The idea of ISIS in Seattle has every agency on high alert.”

Maddy leaned forward on her elbows, intent on the details of their mission, while Forret continued. “You’ll work at the center. Hines will pose as your engineer husband who worked on the clean water project for the ICRC while you helped reunite displaced families from the war.”

Hunter felt a kick to the solar plexus. He was going to have to live with Maddy as her husband? The gods were really messing with him. It would take all his years of discipline to keep his hands off her.

Maddy’s gasp was loud of enough for everyone to hear. “I have to…I have to pretend Hunter is my husband?”

About Jacki Delecki
Jacki Delecki is a bestselling romantic suspense writer. Delecki’s Grayce Walters Series, which chronicles the adventures of a Seattle animal acupuncturist, was an editor’s selection by USA Today. Delecki’s Romantic Regency The Code Breaker Series hit number one on Amazon. Both acclaimed series are available for purchase at http://www.JackiDelecki.com.
To learn more about Jacki and her books and to be the first to hear about giveaways join her newsletter found on her website. Follow her on FB—Jacki Delecki; Twitter @jackidelecki.

Giveaway ends 11:59pm EST Sep. 11th. Please supply your email in the post. You may use spaces or full text for security. (ex. jsmith at gmail dot com) If you do not wish to supply your email, or have trouble posting, please email maureen@justromanticsuspense.com with a subject title of JRS GIVEAWAY to be entered in the current giveaway.