Author…Where do Characters Come From?

Congratulations to "Mary P." and "Jonetta A.", the winners in Cindy's giveaway. Thank you to all who participated!

It’s giveaway time! I’ll be giving away two ebooks of Into the Crossfire to two lucky people who leave me a lovely comment.  Good luck!

People are always asking me, “where do you get your stories from, and where do your characters come from?” “Are they people who you know? Is it someone who I know?” And sometimes they will gasp while cupping their hand over their mouth in complete panic and ask, “Oh, my God! Is it me?!” 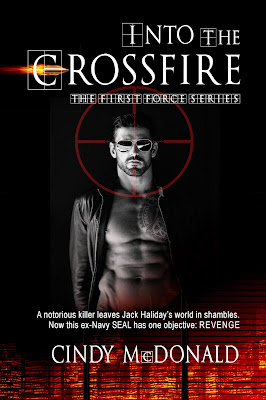 Well firstly, take a look at the man on the cover of Into the Crossfire. I know very few—wait, let me rephrase that—I know absolutely NO ONE who looks like that or my character, Jack Haliday. My older brother has made claims on FB several times that it is a photo of him—wishful thinking on his part—Big time! That said I do know who the man is, Stuart Reardon—professional British rugby player/model. Now that I’ve cleared that up, where did this hot ex-Navy SEAL character, Jack Haliday, come from?

He emerged from the other book series that I write, the Unbridled Series. While I was writing book three of the Unbridled Series, Dangerous Deception, I needed a police officer/detective and so I wrote in the character Jack Haliday, an ex-Navy SEAL who was now an undercover detective. As I wrote the story this character was speaking to me. Suddenly, without intention, the man had a lovely wife who was pregnant, and suddenly I was falling completely in love with this witty brave and oh so very handsome detective.

Okay, after the book published I thought very little about him again—until I started writing book four, Against the Ropes, and there he was again bidding for my attention, and winning without much effort! After Against the Ropes published I decided that I wanted to write a black ops series—I love reading them—why not write one? However, I couldn’t resist letting Jack Haliday ride along for one more Unbridled adventure—he made his final appearance in the Unbridled Series in book five, Shady Deals. Some of the characters from the Unbridled Series make an appearance in Into the Crossfire to help usher Jack into his series, First Force—I kinda like that. Thanks guys!

At this point in the conversation, the person I’m talking to tilts their head to one side, narrows their eyes and askes, “seriously? The characters talk to you?”

If you’re an author reading this you know exactly what I’m talking about. Characters tell us when they want to fall in love and when they want to make love. They tell us how they are feeling and what they fear, and as authors we react accordingly.

So where do the characters who whisper into our ear come from? Many places. They come from our childhood, our relationships, experiences, and things we witness—currently or from long ago. Characters are asleep in the deep crevasses of an author’s mind—they awaken and emerge making themselves known to us when the time is right, and then our fingertips race over the keys to make them flesh and bring them to you. 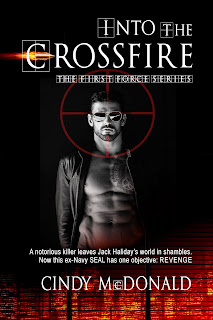 
Closing her eyes, Rayne took in a braced breath. “My name is Rayne. And I know all about the nightmares where the ones that you love are murdered in front of your eyes and you are powerless to stop it.” Her voice fell away.


Jack’s head snapped toward her.


She busied herself cleaning up the implements that she had used to suture him while she spoke. “My husband and I were on a medical mission in Peru three years ago. The Peruvian government had taken down a guerrilla group known as the Glory Road near the Amazonian Valley. They had killed or arrested approximately one-hundred members of the group. Matt and I were part of a small medical unit that went in to care for the women that had been held as sex slaves. They were in terrible condition, dehydrated, starved, and beaten. Anyway, Matt, me, and my four-year-old daughter, Sierra, were housed in one of the tiny shacks in a camp. One night, the camp was attacked by the guerrillas they hadn’t captured. It was a slaughter.” Rayne’s voice hiccupped. She needed to catch her breath. She sank onto the edge of the bed.

Jack watched her intently while she fought to muster composure.

Finally, she continued, “They killed my husband and my daughter, but for some reason they spared me and several of the women who had been rescued. I wished that they hadn’t. I was their prisoner for seven horrible months. I prayed for death every night. Uncle Walt and his team rescued me. It’s been a long road back to becoming a functioning human being.” Hesitating, she wrung her hands together. She found the courage to look him in the eye. “So you see, Jack, I have a complete understanding of what you’re going through.”

Giveaway:
I will be giving away 2 Kindle copies of INTO THE CROSSFIRE to 2 people who leave either a comment or email entry.


Giveaway ends 11:59pm EST Sept. 8th. Please supply your email in the post. You may use spaces or full text for security. (ex. jsmith at gmail dot com) If you do not wish to supply your email, or have trouble posting, please email maureen@justromanticsuspense.com with a subject title of JRS GIVEAWAY to be entered in the current giveaway.
Posted by Maureen A. Miller at 12:30:00 AM