When I told Montlake I wanted to move from my sweet, sexy New Zealand rugby players to romantic suspense set in small-town Idaho, I couldn't believe they said yes. For that matter, I couldn’t believe I’d thought I could do it! But it turned out to be so much fun to write. Zoe's got plenty of backbone, Cal's got a heaping helping of alpha male, and the two of them made me laugh over and over while I wrote their book. Plus, I love a protective man, don’t you?

On a more serious note: I wanted to write about the issue of campus rape and the struggle to get universities to take it seriously and address it—including placing the blame for it where it belongs, on the perpetrators. These young men generally don’t view themselves as rapists, even though that’s exactly what they are. According to a 2014 study reported by Newsweek on December 14, 2014, “Nearly one-third of college men admit they might rape a woman if they could get away with it, a new study on campus sexual assault claims. Of those men, however, far fewer will admit this if the word rape is actually used during the course of questioning.” That’s one of many shocking and disturbing statistics around this topic. But when I shared them in disbelief with my twenty-something sons, they both said, “That sounds about right.”

My challenge in writing romantic suspense is: How do you write a fun, funny, sexy book—a feel-good book, which is what I’m known for—about such a disturbing topic? My answer came from my characters. Zoe and Cal are both strong personalities, none of the women in my story behaves like a victim, and the bad guy doesn’t win. That’s what makes suspense fiction so satisfying, I believe: we want to see the good guys win and the bad guys lose. We want to see them go down. And if it’s satisfying to read­, it’s even more satisfying to write. I love making real life come out the way it should. 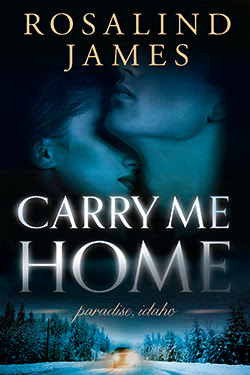 Here’s what it’s all about:

Take one cowboy with a slow, sweet, sexy smile, add one buttoned-down, walled-off geology professor with sass to spare, toss in a campus stalker with other plans...and you've got Paradise, Idaho.

For newly minted professor Zoe Santangelo, Paradise, Idaho is just the first step on the path to the Ivy League. She'll do what it takes to move up, to protect her students from a creepy campus stalker--and to protect her heart from Cal Jackson, the hot, hunky cowboy who keeps coming to her rescue.

After a career-ending injury, Cal has left professional football behind and come home to work the family farm. He's determined not to get mixed up with any more city girls who don't want to settle down with a country boy. But you can’t always reason with your heart.

And here’s an excerpt:

What white teeth you have, she thought. And the big bad wolf said, “The better to eat you with, my dear.” She couldn’t help the delicious shiver that went down her spine at the thought.

He pulled her out onto the floor, set his right hand on her shoulder blade, the fingertips just kissing bare skin, and that shiver was coming from more than her thoughts. He wasn’t trying to do anything else, but she was as aware of those fingers as if he’d been touching her someplace else. Someplace really good. He was looking down at her, those blue eyes holding hers, and the band was playing again. The drums and the bass starting it, a steady, slow beat, the lead guitar kicking in, and the singer crooning low and deep, an incongruously smooth sound coming from his scrawny body.

“Okay. Two-step. First thing you do,” he told her as the music filled her, swept her up in its insistent throb, “is put your hand on me. Right up here,” he said, patting his right shoulder. “And then you hang on for the ride.”

She set her hand tentatively where he indicated, felt the ridge of muscle rising under his black T-shirt, and very nearly took it right off him again.

He felt the hesitation, smiled a little. “Feels kinda close, huh? Not the way you dance with some guy you just met, back in California?”

“You’ve got a secret weapon here, darlin’,” he said. “Called your thumb.” He took his hand off her back, put it over hers, maneuvered her thumb so it was resting on his collarbone. “You give this arm a little muscle,” he told her. “Give me some tension, push back a little. Not a bad thing at all. Where we go is up to me, but how close we dance? That’s entirely up to you.”

“I like that part,” she said. “And you know that thing I said about darlin’?”

“I’m going to keep forgetting,” he said, “because I can’t seem to help myself. So maybe you could pretend it’s all right, this one time. Pretend you’re a pretty girl in a bar, dancing with a man who thinks you’re the sweetest thing he’s seen in months, and that he’s mighty lucky to be the one holding you. Just for tonight.”

Her eyes widened, and he smiled, a little crookedly. “Just pretend,” he said. “I’ll never tell.”

About Rosalind:
Yes, ALL the books are stand-alones except JUST ONCE MORE. NO cliffhangers!

Rosalind James, a publishing industry veteran and former marketing executive, is an author of Contemporary Romance and Romantic Suspense novels published both independently and through Montlake Romance. She and her husband live in Berkeley, California with a Labrador Retriever named Charlie. Rosalind attributes her surprising success to the fact that "lots of people would like to escape to New Zealand! I know I did!"

Visit www.rosalindjames.com to listen to the songs from the New Zealand books, follow characters on their travels, watch funny and fascinating New Zealand videos, and learn about what's new.