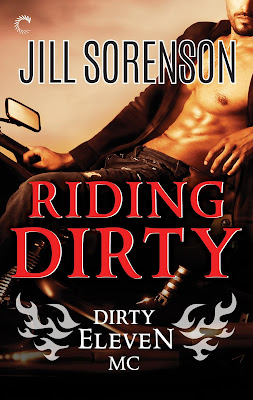 Riding Dirty features one of my favorite themes in romantic suspense: the undercover affair. I can’t get enough of this setup. The hero is a criminal informant who has promised to betray his uncle, president of the Dirty Eleven MC. The heroine is his psychologist. She’s supposed to help him navigate this stressful, dangerous assignment. They both have secret agendas and feel an instant, not-so-secret attraction.

Undercover heroes are common in RS for good reason. It’s a built-in conflict, a great source of tension and an incredibly risky situation. He could be discovered at any moment. He can’t tell her who he really is. She thinks he’s a dirtbag but she’s hot for him, anyway. It’s romance gold! This friction between right and wrong, duty versus desire, mental versus physical, is at the heart of most RS novels.

I’ve always loved Linda Howard’s books. Kiss Me While I Sleep features a rogue CIA agent heroine and a hero who’s been hired to bring her in—or take her out. Anne Stuart’s Ice series is full of coldblooded undercover killers who won’t hesitate to sacrifice an innocent for the greater good. I’m a huge fan of Carolyn Crane’s Associates, and Thorne from Into the Shadows might be my favor undercover hero ever. He’s got that troubled, tortured vibe I can’t resist. Kelly Jamieson’s Hot Ride is a sexy read about two undercover cops (hero and heroine) infiltrating an outlaw motorcycle club.

The idea for Riding Dirty wasn’t directly inspired by any other RS novels. It occurred to me after I watched a terrible reality show about a San Diego-based MC, which opened my eyes to the fact that there are MCs in this area. My number-one inspiration, however, was a superb film by Martin Scorsese called The Departed. 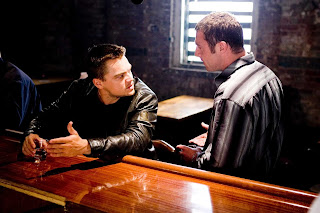 The Departed is one of those movies I can watch over and over again. I absolutely love the dynamic between the anxious, about-to-crack undercover cop and his sexy psychologist (played brilliantly by Leonardo DeCaprio and Vera Farmiga). Matt Damon’s dirty cop on the other side of the law is equally compelling. The entire cast is electric.

Although the hero of Riding Dirty is a criminal informant, not a cop, he feels the same pressure as DeCaprio’s character. He knows he could be killed at any moment. Mia, the heroine, offers a delectable distraction. She’s way out of his league, and she’s supposed to keep a professional distance, but that doesn’t stop him from pursuing her. He’s surprised when she succumbs. Their chemistry is combustible.

Riding Dirty has a happier outcome than The Departed, so no worries on that front. It’s romance, after all.

Giveaway:
What do you think about undercover heroes in romantic suspense? Do you prefer bad guys posing as good or good guys posing as bad? Can you recommend a favorite?
Leave a comment for a chance to win a copy of Riding Dirty! 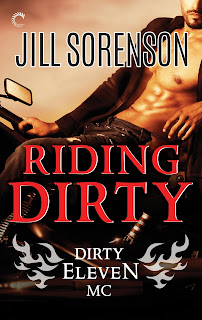 He’s her weapon of choice

Psychologist Mia Richards wants revenge. Her new client, tattooed Cole “Shank” Shepherd, provides the perfect means. She just has to manipulate the felon-turned-informant into eliminating her husband’s killers—members of Cole’s rival motorcycle club. The first step, seducing Cole, is simple. As for walking away before she falls hard—it’s already too late…

Dirty Eleven practically raised Cole, and he plans to double-cross the cops rather than sell them out. But smart, sexy Mia is an irresistible distraction. While she’s evaluating his mind, all he can think about is her body…until he discovers her true intentions. Walking a fine line between desire and betrayal, they’ll have to outrun her past, his enemies and the law for a love that’s dangerously real.

Giveaway ends 11:59pm EST Aug 26th. Please supply your email in the post. You may use spaces or full text for security. (ex. jsmith at gmail dot com) If you do not wish to supply your email, or have trouble posting, please email maureen@justromanticsuspense.com with a subject title of JRS GIVEAWAY to be entered in the current giveaway.
Posted by Maureen A. Miller at 12:30:00 AM