Living the Dream of Being an Heiress


Comfort foods, we all have them. One of mine is brownies. That’s one of the few things Alyssa Brooks, the heroine of Exposing the Heiress and I have in common. Alyssa is the daughter of a famous-actress-turned-screenwriter who grew up in wealth and privilege in a way that I’ve never experience in my real life.

But brownies I’m intimately familiar with! So I included a scene where the hero, Hunt, catches Alyssa eating browines:

Then he caught sight of Lyssie. She had her back to him by the stove in tight white shorts, scooping brownies out of a pan directly into her mouth. With the music, she hadn’t heard him come in. He forgot everything but the sexy woman in his kitchen. Seeing her like this, eating brownies and dancing, drew him to her. He moved quietly up behind her and slapped his hands down on the counter, caging her.

She yelped, twisting her head around. Her expression screamed busted. “Umm, cutting the brownies?”

“With a spoon?”
Color splashed over her cheeks. Her chin went up. “It’s a more efficient system. No plates to wash.”

“Were you going to eat the entire pan by yourself?”

While the scene is funny and sexy, Hunt quickly figures out that Alyssa is worried about something and that’s why she’s making and eating brownies. Alyssa’s wealth and privilege can make her (or any character) hard for most of us to relate to her, but when she does something so normal and everyday as eating brownies because she’s worried it humanizes her.

And of course, it makes Hunt seem like a pretty smart guy to figure it out. I love Hunt in this book, he and Alyssa grew up as friends, and then their lives went separate ways. But the moment Alyssa is in a real danger, she runs to Hunt, and nothing will stop him from keeping her safe…and in his arms.

Back to comfort foods, what are some of yours? 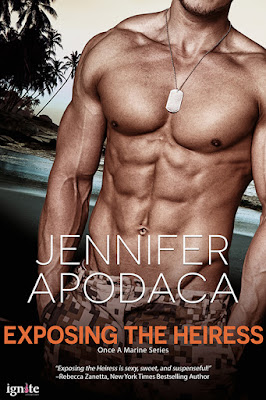 Ignite's new romance is about to really turn up the heat...

This Marine will protect her at all costs...

When wealthy heiress Alyssa Brooks finds out her stepfather has been paying her fiancé to marry her, she's humiliated and betrayed. She quickly breaks the engagement, only to be blackmailed by her now ex-fiancé, who threatens both Alyssa and the son she gave up for adoption. With nowhere to go, she turns to the one man she can trust.

Former Marine sniper Hunter Reece's lethal skills could save Alyssa's life. But his little sister's best friend has turned into a woman, who is an irresistible mix of secrets and sexiness. And while Hunter can trust himself to protect her, he can't trust himself to keep his attraction hidden...or even pretend to be the man that Alyssa remembers.

Because the only way to keep the lovely heiress safe is to become the one thing he knows she could never love...a killer.


About Jennifer:
Award winning author Jennifer Apodaca grew up in Southern California and met her very own hero at the dog pound. She worked there, he came in on business, and it was puppy love. They married and had three wonderful sons.

While her husband worked on his master’s degree, Jen did the mom thing by day and went to college at night with the intention of pursuing a marketing degree. But her true passion was writing. With time at a premium, she had to make a choice.

Choosing writing, and with the full support of her husband, she poured herself into her dream. A mere eight years later, she published her first book DATING CAN BE MURDER. In her career, Jen has written a fun and sexy mystery series and a variety of contemporary romances. Taking the pen name of Jennifer Lyon, she also created a dark, sizzling paranormal series, and most recently, The Plus One Chronicles, an emotional and sexy adult contemporary series.

Jen has achieved many of her dreams except for attaining a self-cleaning house, a latte delivery service, and finding the holy grail of nonfattening wine and chocolate. She can live with those disappointments as long as she can keep writing the stories she loves to share with readers.