Congratulations to "Martha L.", the winner in Denise's giveaway. Thank you to all who participated.

In 2005 the southeastern United States was battered by one of the worse hurricanes in our history.  Her name was Katrina and she devastated Louisiana. Thousands upon thousands of people were affected across the United States.  Many people were displaced and missing. Some exploited for sex trafficking. Many have not returned to Louisiana.  My hat is tipped to those who went back to help rebuild. Homes and businesses were lost as well and to this day Louisiana continues to work to return to pre Katrina.

However, it’s not just disasters that displace people. Children and women and young men are exploited every day in what most likely is sex trafficking. This is what inspired ‘Saint’s Bayou.’  After recently visiting New Orleans on vacation the deal was sealed.  The book that had my muse begging me to write it had to be written and fast. However, there are so many things that go into writing a book. You go from the thought or concept of it to putting the words on the page to the final product and holding the completed book in your hand and turning the pages, hoping it’s as awesome as you dreamed.

As an author I can only imagine what a family and victim goes through when someone is exploited and missing. I’ve been blessed to have not had to face that first hand. I have had family members who dropped off the radar for a while and that alone is very stressful. Yet, still, there is no comparison.

When dealing with social issues in a story our characters will need to be strong. The hero and heroine just as strong as their counter part. What makes them that way?  It is how they were raised? Their past and the obstacles they’ve had to endure? Or is it just who they are?  What makes them survivors? Does their strength also make them vulnerable to hurt and disappointment?  From missing and exploited children, woman and young men, to pharmaceutical companies exploiting money to federal marshals protecting running for their lives romantic suspense and kick ass hero and heroines are the way to go!

Excerpt
Her arms moved around his waist and pressed against the small of his back while her hips moved against his front. She didn’t speak. Didn’t have to. Damn. He didn’t come all the way to Norfolk, Virginia for a one night stand. Regardless of why he was there, he was a goner. He couldn’t form a coherent thought when the heat from her body wrapped around his. Sweat dripped between his shoulder blades and his palms itched with the need to touch her without the barrier of clothing. He glanced over her head toward the table and Nolan smiled, tilted his head toward the door and then nodded his approval of the thoughts he’d been afraid to speak.

“What’s your name?” her voice wrapped around his head. It was as sultry and piercing as her gaze was hot.

“Tyson, Tyson St. Jerreau.” He swung her around, bending her back across his arms and then drew her to him, their faces only inches apart.

“Well, Tyson, Tyson St. Jerreau, what on earth are you going to do with me.”

He groaned, swallowed, groaned again. Damn, she’s a fiery hell cat.  “Not as much as I’d like to.” 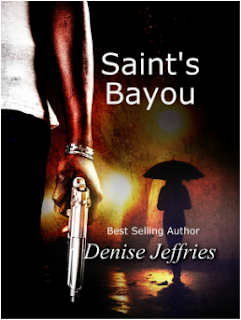 Tyson St. Jerreau didn't believe in fate, luck or love at first sight. He believes in getting the job done. It's about the missing women and children. The girls and the boys. It’s about the case. The one thing he certainly didn't have time for was history repeating itself.

Raine Jacobs doesn't believe in fate or love either or anything else that instills beliefs that life is fair and what it's supposed to be. After all, she shouldn't even be here. She's supposed to be dead.

As anger builds and sparks fly, when their paths cross... again, will they be able to put the past where it belongs... in the past and allow what's building between them to blossom or will the lies separate them forever.

Giveaway:
Denise will be giving away a copy of SAINT'S BAYOU to one person leaving a comment or email entry.

Giveaway ends 11:59pm EST Aug 28th. Please supply your email in the post. You may use spaces or full text for security. (ex. jsmith at gmail dot com) If you do not wish to supply your email, or have trouble posting, please email maureen@justromanticsuspense.com with a subject title of JRS GIVEAWAY to be entered in the current giveaway.