Congratulations to "Erin", the winner in Lisa's giveaway. Thank you to all who participated!

I admit it: I love writing about the antagonists – those bad guys who are determined to destroy our heroine, hero, and/or their possible romance. What’s so enticing about bad guys? For me, I model them after real life people from frustrating or difficult or even painful situations, and then I work through my hurt or anger by writing them into a story in an unflattering or compromising scenario.

Got a difficult co-worker? I can write that person, either male or female, into a book and work out my annoyance by getting them fired, or . . . arrested for stalking. My girlfriend’s ex-husband who refused to pay child support? In a previous book, he ended up flat on his back after an upper cut to his jaw. Whatever the trouble, there’s nothing like venting through the keyboard. I have one author friend who’s killed off her ex-husband four times through different characters in her murder mysteries. She hasn’t had a fight with him in over ten years, but she sure has had some fun expressing her anger in a healthy manner.

In A Dream for Love, Laurel Simmons is a single mom with an adorable 4-year-old daughter named Gracie, and a secret past that could get them killed. That last thing Laurel’s ex-husband told her to do was to terminate her pregnancy or he would terminate her.  She ran, and she’s been running since.

When Laurel wins a week’s stay at movie star Ryan Crandall’s beach house on Martha’s Vineyard, all she wants to do is relax with Gracie. Her dream vacation lasts less than half a day before Headline Crandall shows up unexpectedly. Ryan’s exploits are public knowledge, and a major reason Laurel will evade him like a mouse eludes a hungry cat, but there’s a particularly slimy character lurking around Ryan’s movie set who’s more than a little interested in Ryan and his coming and goings.

Giveaway:
If you could write a bad guy into a novel, would you have a little fun working through some pain and frustration?  One commenter wins a copy of my latest release, A Dream for Love, and a few extra surprises! 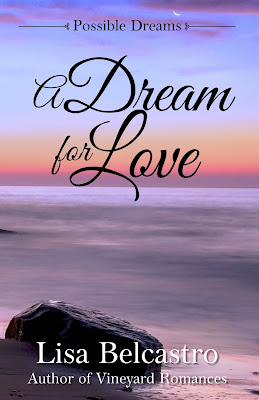 A Dream for Love

A single mother with a secret past. A Hollywood star who's life is anything but hidden. Will the past deprive them of a future? Or will they dare to dream a dream for love?

When the gavel hit the wooden block at the Possible Dreams Auction, Laurel Simmons sat in stunned silence. Her sister had lost her mind, purchasing a week’s vacation stay for two at actor Ryan Crandall’s beach house on Martha’s Vineyard. And then Tammy announced that she was giving the “dream” to Laurel as an early birthday present.

A month later, Laurel and her four-year-old daughter Gracie arrive at the luxurious house on Squibnocket Beach ready to swim, play, picnic and enjoy the peace and solitude together.

Laurel’s dream vacation quickly turns into a nightmare when Hollywood bad boy Ryan Crandall shows up to escape his latest tabloid headlines. Ryan wants the woman and her child gone. Laurel wants him gone. Fate will bring them together for reasons neither one of them expected, but fate will also drive them apart.

Laurel has a past she needs to keep hidden. Her life and Gracie’s depend on it. Ryan has a past, and present, that’s been food for public consumption for over a decade. Will the past deprive them of a future? Or will they dare to dream a dream for love?

“If a book had all the perfect elements in it, then this book does.”
--Goodreads Reviewer

“Ms. Belcastro didn't disappoint me at all.” Author Collette Cameron

Author Bio:
Lisa Belcastro lives with her family on Martha’s Vineyard.  She loves running, gardening, outdoor activities, cooking, chocolate, reading, traveling, a healthy dose of adventure, and her cat, Ben, who keeps her company while she creates fictional lives for the numerous characters living inside her head.

When she’s not at her desk, Lisa is living in paradise, volunteering at her daughter’s school, serving in her church community, planting and weeding her numerous gardens, training to run the Walt Disney World Dopey Challenge in January 2016, walking the beach looking for sea glass, or enjoying a great meal while she pens the cuisine column for Vineyard Style Magazine.