Congratulations to "Library Pat" the winner in Jeanne's giveaway. Thank you to all who participated! 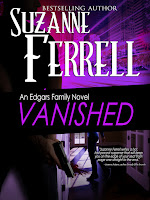 I recently had the best adventure!  It started with a very scary conversation though *cue spooky spy music*…about terrorists.  You see, my friend Suzanne Ferrell writes outstanding suspense novels about a hunky group of men and very smart women in her Edgars series.  I write about soldiers and spies and smugglers so it was natural that we'd be talking about that kind of thing.  I’d just finished putting out Dead Run, about a woman in witness protection and an undercover agent.  I was starting book two in my Faithful Defenders series, Dead Reckoning, which features a hitman and some international terrorists.  Suz was finishing her latest Edgars novel.

Talking about our projects this time however, got Suz and I talking about homegrown terrorists.  The kind of people who should be faithful to the USA, but just aren't.  And, being writers, we were talking about how to use them best in a story, what lines to cross, what things you really didn’t want to do.

Then we got an idea.  As the Grinch would say, we got a wonderful, awful, idea.  This frequently happens when Suz and I talk.  But there are ideas and then there are ideas.  Grins.  We had also been talking about elections.  Terrorists.  Elections.  What if terrorists wanted to stop or disrupt and election? Ooooooh.  How cool.  How could we do it?  Did we have time with our other commitments?  Did we want to write something together?  How would we do that?  Novellas?  Two stories…wait, what if we got pals?  FOUR stories!

Yeah, that was the way to go, we decided.

So, who?  That was pretty easy.  I knew that our pal from the Romance Bandits blog, Nancy Northcott, was working on a series that I’m totally jonesing for her to publish.  It’s about the Arachnid Agency —very super-secret-spy stuff.   And Suz thought her friend J.D. Tyler might want to play as well, since she’s branching out from her Alpha Pack paranormals into some serious suspense.

We asked, and we were right, and they wanted to blow some stuff up right along with us.  Thus, CAPITOL DANGER was born.

The four of us batted ideas around, but what came out was the story of an incredibly misogynistic, home-grown terrorist organization that doesn’t want to see a woman in power.  Especially in the highest seat in the land.  So, when a woman is elected president, it’s on. 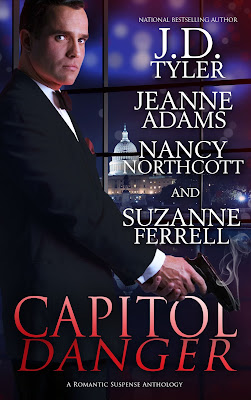 A romantic suspense anthology like no other! Four stories, one event and four dangerous missions on the same night.

It’s Inauguration Night. Glamorous balls throughout the nation’s capital celebrate a landmark event. The town and nation are in the mood to celebrate. But not everyone is so pleased.

A home-grown sect known as the Red Mantle plan to make it an event to remember for their reasons. As their assault succeeds it will be up to those attending the ball to step up and face the fanatics, or die trying.

Abigail Whitson and Luke Edgars are working an undercover operation during the inaugural ball in an attempt to discover who has stolen land to air missiles before they can be sold to a broker—their target for the night. When the playboy arms dealer arrives at the ball, his bodyguard turns out to be someone from Luke’s past.

That isn’t the only surprise of the night. When the ball is invaded by terrorists, Abby and Luke find themselves trying to extract the arms dealer from the fray to protect their mission, while they also risk their lives to protect innocents from the carnage.

DEATH UNDER GLASS: a Deadly Charms Novella by JeanneAdams

Edward Millner and his girlfriend Retta Geminous, are celebrating a glittering inaugural. When Red Mantle terrorists take the ballroom, both bullets and glass start flying. Edward and Retta help the agents still standing retake the ballroom, but casualties are high. Can Edward face his demons and use his former Special Forces medical skills to save the night? Can Retta and Edward overcome their troubled hearts in the face of certain death?

When terrorists disrupt the inaugural ball, new Arachnid Agency operative Kelsey Mitchell tables her planned undercover operation and works to bring help into the hotel. Her only ally is Greg Reed, an FBI agent on medical leave after being shot during a robbery. Kelsey dreads making a novice mistake, and Greg is afraid he’s lost his edge.

Attraction flares between them though Kelsey knows the Feds disapprove of people who work for her freewheeling agency. Together, she and Greg must fight their demons and the terrorists to gather intel for the FBI and create a safe landing zone for a rescue force. Can they succeed against overwhelming odds, or will the battle cost one or both their lives—or their hearts?

LETHAL TARGET: An Armed and Deadly Novella by J.D.Tyler

FBI Special Agent Dalton McCoy is playing a deadly game, working undercover for Methan, leader of the extremist terrorist group, the Red Mantle. He’ll stop at nothing to keep Methan and his men from achieving their goal of bringing down key members of the government. When Dalton’s plans come to an unexpected head at the glittering inaugural ball, he doesn’t count on tenacious reporter Jolie Montfort placing herself in Methan’s line of fire as well. Now the agent must take out the terrorist leader and get them both to safety before its too late…
Amazon | Barnes and Noble | iTunes

So, I wrote the prologue, set up the terrorists and laid out our event space.  Since I live in DC, I picked what was, when we started, an empty lot in DC and “built” our hotel, The Fierenze.  It’s a new, boutique hotel.  The event is a gala celebrating woman’s advancements, and some very high-powered muckety-mucks from the government are going to attend…possibly even the president.  The terrorists have a plan in place to make sure she attends so they can get to her, so as the festivities get rolling, things start to heat up.

Suz got the fun job of kicking things off and starting the BOOM!, then I got the baton, then Nancy, then J.D. wrapped everything up for us.  The stories are so interconnected that we each had to be sure we weren’t stepping on each other’s “lines” so to speak.  If an elevator crashed in Suz’s story (it didn’t, but…) Then I needed to be sure to mention that in mine.  When I locked my crew in the main ballroom, it meant that Nancy and J.D. couldn’t run through that ballroom in their stories.

Whew!  Lots of emails.  Several drawings of the lobby and ballroom floors of the (virtual) hotel, not to mention those ever-popular sub-basements and tunnels, and stairwells.  Lots of shooting.  Lots of action, a LOT of sexual tension and heat, eh, Voila! You have a heck of a story that reviewers are already calling “brilliant,” “intense,” and “riveting.”  We’re blushing here!!

Taking the book from concept to delivery was such an amazing, wonderful learning experience. And working with these wonderful, creative women was incredibly fun, rich, and rewarding.  They have the best ideas, I tell you!!  So now, from you, we all want to know....

Giveaway:
Jeanne will be giving away a copy of Dead Run and Capitol Danger (in paper) to one winner.

Have you ever been to an inaugural or a big gala?

Would you want to go undercover at this kind of event, or something like it?

Would you ever want to be a spy, or an agent, or would you do better as a reporter or a terrorist?  Grins.

If you could take a date (real, imaginary, book boyfriend, real boyfriend) and go to an Inaugural, would you?  What would you wear and would you people watch or just jump on in and dance?

Giveaway ends 11:59pm EST Aug 19th. Please supply your email in the post. You may use spaces or full text for security. (ex. jsmith at gmail dot com) If you do not wish to supply your email, or have trouble posting, please email maureen@justromanticsuspense.com with a subject title of JRS GIVEAWAY to be entered in the current giveaway. US residents only.
Posted by Maureen A. Miller at 12:30:00 AM