Congratulations to "Jonetta", the winner in Wendy's giveaway. Thank you to all who participated!

When I started to write Accused I thought about myself as a parent, all the worries I had while my boys were growing up, sometimes about mundane everyday things, sometimes just because my mind takes a giant leap at times and worries about pretty much everything. (I’m so trying to break that habit BTW. J) You hear about kids who were good kids but they make one mistake and their lives are irrevocably changed. That very idea gave me the beginning for this story. It was easy to imagine what my heroine Jillian might have been going through as a mother.

Then I started to think about a hero for this story and what kind of person he might be. Since my background is in social work, I’ve always had a burning need to portray kids who’ve gone through the child welfare system in a positive light. My hero, Sam Carter, as a young child was shuffled from one foster home to the next. He’d be the first to admit he was no angel and got into trouble a lot. But what if someone came into his life that believed in him? Or as Sam calls Mama Iris, ‘the Mother Teresa of foster moms’. She gave him a chance and didn’t give up on him. Now, as a successful adult, he returns the favor to other kids in trouble. Below is a short except from when Jillian and Sam first meet.

Somehow she’d managed to hold onto a sliver of fragile hope over the last couple of days, but now the enormity of the situation crushed her spirit. Surely she would go stark raving mad from the pressure.
She tumbled into an open elevator and leaned against the back wall. Tears rolled down her cheeks and sobs hiccupped through her chest. Catching her breath seemed like a formidable task with depleting energy.
“Are you all right?” The voice sounded familiar, but she couldn’t raise her eyes to see who it came from. “Let me give you a ride home. We can come back later for your car when you’re feeling better.”
She raised her head. “You’re...hiccup...Coach....”
“Sam. I’d be happy to give you a ride. You’ve had a rough morning.”
For some reason, she couldn’t get her head around why he’d offer her a ride. Yes, she was a mess. Yes, she couldn’t string more than two words together coherently. “I’m fine.”
“Forgive me for saying this, but you look like you might pass out any second.”

Giveaway:
Leave a comment about your favorite movie or book about the underdog who survives and triumphs despite obstacles for a chance to win a $10 Amazon gift card. 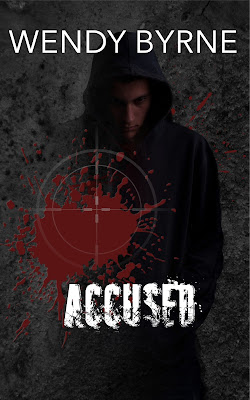 Spawned from the depths of every parent’s worst nightmare, Jillian Beckett’s 16 year old troubled son is charged with murder. He’s unable to remember what happened and swears he’s off drugs, but should she believe him? Her ex-husband doesn’t. The high-priced lawyer she hired doesn’t. Where does motherly instinct intersect with reality?

Afraid and alone, she reluctantly enlists the help of her son’s football coach to find the truth of what happened. As they battle to uncover the guilty party, confidences are shattered, lives are on the line, while her son is one step closer to spending his life behind bars.

About the author:
Wendy lives in the Chicago area. She has a Masters in Social Work and worked in the child welfare field for twelve years before she decided to pursue her dream of writing.
Between teaching college classes, trying to get her morbidly obese cat to slim down and tempering the will of her five-year-old granddaughter, who's determined to become a witch when she turns six so she can fly on her broom to see the Eiffel Tower and put hexes on people--not necessarily in that order--somehow Wendy still manages to fit in writing. She spends the remainder of her days inflicting mayhem on her hero and heroine until they beg for mercy.

She has written three books in the Hard Targets trilogy, Hard to Kill, Hard to Trust and Hard to Stop. In addition, she has a contemporary romance through Entangled Publishing called The Millionaire’s Deception, a self-pubbed Christmas short story called The Christmas Curse and two interracial romances, Fractured and Mama Said.

Giveaway ends 11:59pm EST August 6th. Please supply your email in the post. You may use spaces or full text for security. (ex. jsmith at gmail dot com) If you do not wish to supply your email, or have trouble posting, please email maureen@justromanticsuspense.com with a subject title of JRS GIVEAWAY to be entered in the current giveaway.