Moriarty.  Iago.  Lex Luther.  Hannibal Lecter.  The Wicked Witch of the West.  Just the sound of their names brings the thought of evil to mind.  These are some of the more memorable of the numerous villains, or ‘bad guys’ if you will, created by skilled authors to pit against the heroes or ‘good guys’ of the story.  Villains appear in many different literary genres, from political thrillers to science fiction to mystery to romantic suspense to serious literary work.  They can be supposed friend or former friend turned enemy, an ideological opponent, a thug or a psychopath with a bone to pick.  They can be a lone wolf or the tip of a much bigger iceberg.  They can be thieving or murderous or diabolical.  Their ire can be personal or they can hate what the hero stands for.  They can be out to destroy the hero personally, financially, or by destroying what our hero loves most.  They all have one thing in common-they are up to no good.  But they are a necessary foil to the goodness of our heroes and heroines, and a carefully crafted, well-written villain can be just as memorable as the hero or heroine they are created to challenge.

Back in the early days of my career I wasn’t overly worried about creating a good villain.  Most of my books were straight romances, and while there was the occasional rotten apple I was not creating true villains in that genre.  Even the books with a slightly suspenseful theme did not have a villain as such.  But when I decided I wanted to add the elements of danger and suspense into my stories I had to sit down and think about what made an effective villain in literature and how to bring that villain to life.  And then I had to figure out how to bring that character into the story in such a way that neither the hero, heroine, or reader knows until the end who their nemesis is nor why they are doing the things they do.  This takes some careful plotting-no flying by the seat of one’s pants-and occasionally it takes going back into the story and adding hints and clues that were not included in the first draft.

So what makes a villain in a romantic suspense novel believable?  I try to make sure that my villain first and foremost is a villain, not a hero who does bad things or antiheroes such as the Corleones in the Godfather series.  My villains have to be doing something evil, something that is going to bring harm to my protagonists or others in the story and they are not to be admired for it.  However, it is very important that the villain have a reason for doing what they do.  Sometimes having them a thug or a greedy titan is enough, especially if our hero or heroine gets in the villain’s way, but it is infinitely better if the villain has a specific bone to pick with his or her victims.  That issue might seem unreasonable to everyone but the villain, but it has to be reasonable to him or her.  And it is never enough, at least in a suspense novel, just to declare the villain psychopathic or ‘crazy’.  There has to be a reason the villain is what he is and doing what he does.

So what else do I include when I craft the bad guy of the piece?  My villains are all smart-scary smart in some cases, and I make sure that they would have the skills to carry out whatever crimes they commit in the course of the story.  In an early version of ‘Solomon’s Choice’ my villain Cissy was a vindictive but weak alcoholic dependent on someone else to carry out her nefarious plans.  After it was pointed out to me that Cissy as I had portrayed her could not have carried out the crimes she is guilty of I turned her into a cunning, manipulative loner who by guile got others to do her bidding.  I make sure the villain has the skill set to carry out the crimes they are perpetrating.  (I would not, for example, have a mild-mannered chemistry teacher shooting someone from a hundred yards away or strangling them with her bare hands, but I could and did have her poisoning people with chemicals from her stock room.)  A careful matching of character to skill set not only makes the story and the villain more believable but also provides valuable clues to the good guys trying to track them down.

Should a villain have a conscience?  Sometimes yes, sometimes no.  My villains in ‘Solomon’s Choice’ and ‘Daughter of Valor’ did not.  They loved and they grieved and in their minds that made their heinous behavior acceptable.  My villains in ‘Never and Always’, on the other hand, do have consciences.  They know that they are hurting innocent people and even come out and say that to one another, but make the decision to go ahead and deliberately do things to innocent people in order to destroy the woman they hate.  Either scenario works, depending on the context of the story, and in the hands of the right author it’s great fun to watch a villain with a conscience destroyed by his own actions.

A strong hero and heroine deserve an interesting, believable, bad guy, a villain worth besting in the end, and I always do my best to make sure that they get one. 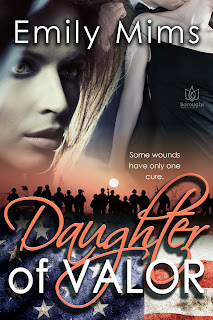 When wounded war hero Holly Riley comes home to the Texas Hill Country to build a new life for herself, she has no idea that life will include sexy Congressional candidate Jimmy Adamcik!

Synopsis
Wounded war hero Holly Riley has come to the lakeshore community of Heaven’s Point to recover from her injuries and build a new life for herself with her band of fellow wounded warriors.  Temporarily employed as a nanny be charismatic Congressional candidate and neighbor Jimmy Adamcik, Holly and Jimmy quickly began to care for one another in spite of Holly’s distrust of politics.  But Jimmy finds himself sucked deeper and deeper into the seamy side of the political process, and an old enemy from Jimmy’s past targets Holly’s soldiers one by one.  Will Jimmy and Holly’s love survive the double onslaught-or will they be the final target of their unknown enemy’s rage? 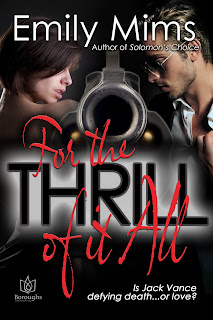 For The Thrill Of It All

From the moment she lays eyes on him, Amanda Blakeman is drawn to fellow police officer and Jack Vance, a fearless SWAT team officer who seeks out thrills and danger both on the job and off.  Thrown together in search of a serial murderer haunting the bars of San Antonio, Jack and Amanda quickly begin to fall for one another, but the needless danger Jack deliberately places himself in time after time terrifies Amanda and threatens to destroy their developing relationship.  As they draw ever nearer to the killer that they seek, will Jack and Amanda love survive Jack’s increasing compulsion to seek out danger, or will Jack pay for his thrills by losing Amanda-or his very life-in the process?

Jack loves fellow police officer Amanda Blakeman-but he also loves taking a needless chance.  Will Amanda’s love for Jack survive the constant fear she has for him, or will Jack’s foolhardiness cost him the woman he loves-or his very life?