As a writer, I like a good looking man.  Include muscles on top of muscles, and my interest is piqued.  Add power and the keys to the family business?  Well, that’s a recipe for an interesting character

Nick Calvetti fills out his designer suits like a male model.  He’s toned, he’s tanned, and he’s one of the most powerful men in New York.  A poor unsuspecting female could be excused for falling under his spell, his charm, and his unlimited wealth.  That’s exactly what Sofia did.  She fell for the tall, dark, handsome man with deep brown eyes that turned her common sense to mush.

Too bad underneath the smooth veneer flows the blood of a psychopath.  No one said evil had to be ugly.  Now Sofia is his ex-wife, but she’ll never be free. 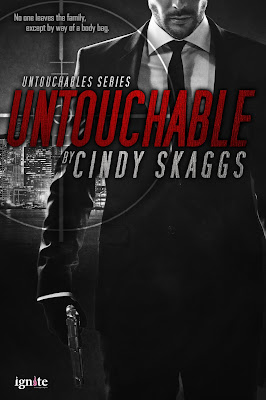 As the former wife of an infamous crime boss, Sofia Capri is considered untouchable. She exists outside of the law...and outside of the criminal world. When her son is kidnapped, Sofia's desperate to find him. She'll do anything. Lie. Cheat. Steal. Seduce...

Something about Sofia's fiery beauty must be hitting all of his weak spots, because suddenly Mr. Law And Order Logan Stone finds himself bending the rules. When they're implicated in the kidnapping, Logan and Sofia discover they have less than 72 hours to find the boy and clear their names.

Now the heat is turning up...and time is running out...for everyone.

Author Bio:  When they told her a woman could do anything, Cindy thought they meant everything, and decided to give it a go. Cindy holds an MA in Creative Writing from Regis University, is an MFA student at Pacific Lutheran University, works three jobs, is a single mom to two of the most active kids on the planet, pet owner, and child chauffeur extraordinaire.

She now works in a library and teaches writing and composition to college students while working on her novels.  When she’s not writing, she’s trying to prevent the neurotic dog from either chewing the furniture or eating whole sticks of butter (often still in the paper).  She’s beginning to think maybe she can’t do it all. At least not all at once.  For more information, visit her website:  http://www.cskaggs.com

Exerpt:
He’d seen her pull a set of lock picks from her duffel, along with cash, a stuffed animal, passports and Lord knew what else. She was resourceful, and her little bag of tricks came in handy. The one thing he was certain she didn’t carry was a gun, and that suited him fine. The thought of this particular woman being armed was incredibly dangerous.

“You can turn around now,” she said.

Logan turned. The woman across from him no longer resembled the demure Sofia Capri Calvetti of his FBI file. She was blond now, with long strands that curled around her pale face. She had a mirror propped on the shelves and was applying makeup to cover the scrape on her cheek.

Fascinated, he stepped closer. What a skilled woman could do with a makeup brush was bewitching, and he’d always been drawn to magic. He was also drawn to the woman across from him in a way that was no less mystical. With a few flicks of a brush she turned her eyes smoky, then followed with a swipe of mascara that turned her lashes into something from a magazine ad.

When she turned, the air stirred with the scent of recently applied perfume. He knew that smell in the dark.

“What do you think?”

What he thought he couldn’t say out loud. “You don’t look like Aunt Bertha.”

She spun to show off the transformation. The movement fanned her scent across the small space, surrounding him in a scent that would tempt a monk. He wanted her. Until yesterday, she’d been a pretty woman he was paid to watch. Nice gig if you could get it, and while he’d always thought her sexy in touch-me-not shades, the woman behind the shades was far more alluring.

She looked like sin in a dress. A blond Mata Hari in stilettos. Drawn by the sound of soft fabric and silky skin and a temptation he no longer tried to deny, Logan stepped around the car. If the sound of her undressing had him hard, the smell of her had him ready to do disreputable things to her in the backseat of her grandfather’s car.