Congratulations to "Taurus", the winner in Sharon's giveaway. Thank you to all who participated! 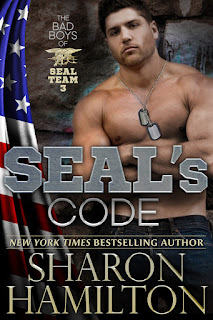 SEAL’s Code is my first Native American SEAL story. Woven into the story are some gems of historical research I did on the Dine peoples and the land of the Four Corners. Danny Begay hears singing, and the voice of his Navajo Code Talker grandfather who has just passed away at the beginning of the book.

His head is a busy place. He’s thinking about Luci Tohe, a Dine teacher on the res. As he comes back to his Navajo roots, he learns that what he was running away from as a younger man will save him and his family in the end.

This isn’t a paranormal romance, but there definitely are some spiritual and mystical elements here. Both characters are running away from something. Luci is stuck on the res, trying to protect her little sister. Danny is yanked back to the res at the death of his famous and heroic Grandfather, a WWII Code Talker. They bisect at the right place and time as they’re headed in different directions, but their collision is strong enough to pull them back together when it is most important.

I once explained what love is to a group of high school students. “You go streaking off, like a comet in the sky, until you hit something.” And that’s exactly what happens to Danny and Luci. Their relationship isn’t planned, but they soon learn one cannot live without the other. Everything that came before was the perfect prelude to the magic and glory they’d find in their HEA.

I’m a hopeless romantic. I like my heroes and heroines to fall and fall hard. I like love to be unexpected and moving.


For a chance to win an audio book of your choice from my backlist, let me know if you think two people madly in love can hear each other’s thoughts? Has this ever happened to you? Do you wish the heroes and heroines you read to be able to do so? 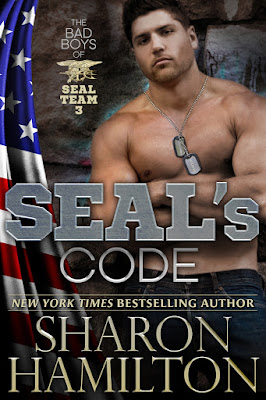 Seal’s Code by Sharon Hamilton
After successfully completing the grueling training and being awarded his Trident, Navy SEAL Danny Begay goes back to the res and becomes embroiled in dangerous intrigue and a race to save the girl he now knows he was destined to protect for all eternity.  Fans of Kaylea Cross and Cristin Harber will be enthralled with this new installment in the Bad Boys of Seal Team 3 by NYT bestselling author Sharon Hamilton.

Synopsis:
Danny Begay has tried to drive out the voices of his ancestors, but his Navajo roots will not die. Summoned back to Arizona to visit his dying grandfather, a former Navajo Code Talker, he knows he has disappointed his hero grandfather. He buries himself one more time in the arms of a stranger before going back to Northern California.

Luci Tohe teaches at a reservation school, safeguarding the health of her ailing mother and little sister’s future, her own life on hold. She doesn’t expect the young Dine warrior she meets to be anything but a distraction from her loneliness.


Danny decides to join the Navy, as a SEAL, becoming the man he knew he was destined to be. Before deployment, he goes back to visit the girl he cannot get out of his mind. A dangerous human trafficking element threatens Luci and her family. Danny vows to protect them all.

Excerpt from SEAL’s Code:
“You’re new,” she said to the mirror.

He could feel her breathing, imagined what her flesh would feel like if he smoothed his fingers down her thigh. “Actually, I’m not here at all.”

She turned on the stool, grabbing her beer, and took a sip while she examined him. She was still smiling when she was done.

“You look pretty f'in’ here, Dine kind. But then maybe I’m a ghost too and maybe I see dead people.”

That deserved his attention, so he allowed his body to turn, facing her, knees touching hers. Through the stiff denim of his jeans he could feel her body vibrate like the inner workings of an expensive Swiss timepiece.

“Chester Tso is my grandfather. I believe he will die tonight.” He watched it sink in. She bit her lip just below the slight scar that slashed her upper lip, probably from an old injury. It made her look dangerous and sexy as hell. A slight worry line creased her right eye with just a touch of a twitch.

She turned back to the counter, staring down as if examining the head on her beer allowing her unpolished nail of her left forefinger to dip into the sudsy froth and draw a figure eight.

He had to agree with her. It sucked he’d never made much of himself, and now Grandfather was dying, knowing that. He wasn’t sure there was any potential for any spiritual growth anytime soon, either. That sucked too.

That left only one option for this evening. To get drunk. Maybe get her so drunk she’d go back with him to the motel. He glanced around the room and didn’t see any white boys so figured he’d have a chance with her. With any luck, neither one would remember a thing in the morning. He’d get the call Grandfather was gone. He could pay his respects, stay for the ceremony and then get his butt out of Arizona and back to Northern California. Forget this sandy hell hole for as long as the drink lasted.

“So why are you here?” he started. “Cheaper to drink at home, and a whole lot less dangerous. The drive is what I meant.” He was surprised these words came out of his mouth.

She answered the mirror again. “I know what you meant, Dine kind. I teach at the school.”

“Ah. First choice or last choice?” He knew it was a risk to ask it but he couldn’t help himself.

She almost spit her beer out. “Gawd, it must be true. That old fart gave you some of those visions.”

He turned and tilted his head, wondering what she meant. She addressed him this time by angling slightly so her knees wouldn’t touch his again. Her face in partial profile was masked. She was trying to hide something. “I’m not a do-gooder. Not one of those. I get to hide in plain sight. But I do carry a gun.”

“Nope.” She licked her lips, her tongue lingering there a little long, her eyes again focused down on the counter. “I am the sole breadwinner, and protector of my little tribe. My mother and my little sister.”

“As do you. I can smell an alcoholic a mile away.” Then she gave him the sultry look he was waiting for. “I seem to be drawn to them, like a string of bad pennies, little babbling storytellers. Can’t help it. My nature, I guess.”

Well, she already had said twice as many words as he normally liked in a woman, and hadn’t given him nearly enough “looks”, but he was game.

“Humor me. What makes you drawn to me?”

Her full focus on his face almost made him blush. Her power and nature were strong. Her soul deep. She did not possess the need to smile from nervousness, or to hide the spirit that ran wild inside her. For him, right here and right now, she allowed him to absorb and be warmed by it. Her dark eyes and unlined forehead honestly peered back at him. “I like your jet black hair Dine man. The dark of your eyes all the way through. The black eyes of the tribal kind. But you weren’t raised here, so maybe you got away, maybe not. In any case, I gotta hurry if I’m going to meet you because I think tomorrow you’ll be gone.”

NYT and USA/Today and Amazon Top 100 Bestselling Author Sharon Hamilton’s SEAL Brotherhood series have earned her Amazon author rankings of #1 in Romantic Suspense, Military Romance and Contemporary Romance. Her characters follow a sometimes rocky road to redemption through passion and true love. Her Golden Vampires of Tuscany earned her a #1 Amazon author ranking in Gothic Romance.

A lifelong organic vegetable and flower gardener, Sharon and her husband live in the Wine Country of Northern California, where most of her stories take place. When she’s not writing, you will find her in the garden, getting verra verra dirty.

Giveaway ends 11:59pm EST July 26th. Please supply your email in the post. You may use spaces or full text for security. (ex. jsmith at gmail dot com) If you do not wish to supply your email, or have trouble posting, please email maureen@justromanticsuspense.com with a subject title of JRS GIVEAWAY to be entered in the current giveaway.