Relating to the Villain

Congratulations to "Colleen C.", the winner in Jannine's giveaway. Thank you to all who participated!

You can’t write romantic suspense without a great villain. Whether he (or she) is a serial killer or a stalker, there has to be something unique about the character that sets him apart and sticks in a reader’s mind. In Every Step She Takes, my villain is an assassin, hired by a mob boss to eliminate the witness in protective custody who will lock him up for life if he testifies. Unfortunately for my hero and heroine, they’re the only thing that stands between the hit man and the job he’s been paid to do. Simple and straightforward. The guy is cold. But, I wanted more. I wanted to take my villain to the next level. So, I gave him a connection to my heroine, a link to her past that gives this coldblooded killer a personal reason for taking her out, for coming after her even when she no longer stands between him and his target. I hope his twisted logic shines through in a shivery, creepy way, letting the reader see inside his mind. Here’s a short scene in my villain’s point of view. Enjoy!

It was a freaking three-ring circus, or a scene out of one of those old Three Stooges movies. He lowered the binoculars and climbed back down to the trail. Travis Barnett led the parade with the hot little journalist closing the gap between them and a dog—a dog for Christ’s sake—following her.

It had been a shock when he’s seen her on the plane, laughing and chatting with Barnett. Grace Hanover—a name from the past. Not his past, exactly, but close enough. The years rolled back, and all the old memories flooded to the surface. The pain of loss hit hard and fresh, but he’d tamped down his shock and got his emotions under control by the time they’d officially met. She didn’t have a clue who he was. Didn’t have a clue he’d followed every step she’d taken for years, knowing one day the time for justice would be right.

But that time wasn’t now, despite the fact she’d practically landed in his lap. He had a job to do, and he wouldn’t let personal feelings intrude. Who Grace Hanover had been—what she’d caused all those years ago—didn’t matter at the moment. He forced back the memories and addressed his wandering attention to the situation at hand.

He was a professional not some extra in a sitcom. Who would have thought he’d have to get in line to find Sutton? If it wasn’t a matter of pride, he’d turn around and head straight back to the lower forty-eight and screw Estrada. But a contract was a contract, and word would get out damn quick if he failed to close the deal.

Lifting his pack, he grunted as he shrugged it onto his shoulders. Grace Hanover was a joke, a two-bit reporter, but Barnett wasn’t. A quick internet search on the French’s computer had turned up plenty about the man. He’d obviously been hired to reel in Sutton. Barnett was good at what he did, but this time he’d fail. He’d let the former SEAL do the work of tracking their quarry before taking out Sutton, Barnett and Grace. One, two, three—pop, pop, pop. Score settled. Out here in the middle of freaking nowhere, chances were the bodies would never be found. 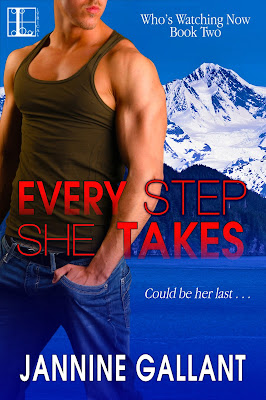 EVERY STEP SHE TAKES

You can run from the past, but you can’t hide...

Tough as nails, no nonsense San Francisco reporter Grace Hanover will do anything to cover the story of the decade—and her career. Having survived a painful past, she’s learned never to let anything stand in her way. Even if it means following a key witness into the Alaskan wilderness, and partnering with Travis Barnett, a former Navy SEAL turned PI who’s working for the Feds, and who would love to bring in Grace’s witness before she can get her story. But together in the wilderness, they’ll each have to put aside their differences and trust one another if they want to survive.

Because someone from Grace’s past is watching, waiting for just the right moment. Every step Grace takes draws her deeper into the line of fire, and into the hands of a killer…

About the Author:
Write what you know. Jannine Gallant has taken this advice to heart, creating characters from small towns and plots that unfold in the great outdoors. She grew up in a tiny Northern California town and currently lives in beautiful Lake Tahoe with her husband and two daughters. When she isn’t busy writing or being a full time mom, Jannine hikes or snowshoes in the woods around her home. Whether she’s writing contemporary, historical or romantic suspense, Jannine brings the beauty of nature to her stories. To find out more about this author and her books, visit her website at janninegallant.com.

Giveaway ends 11:59pm EST July 8th. Please supply your email in the post. You may use spaces or full text for security. (ex. jsmith at gmail dot com) If you do not wish to supply your email, or have trouble posting, please email maureen@justromanticsuspense.com with a subject title of JRS GIVEAWAY to be entered in the current giveaway. There may be some delays in announcing the winner.