Congratulations to "Erin F.", the winner in Julie's giveaway. Thank you to all who participated!

When people ask me what Deadly Strain is about my answer is: military bioterrorism dirty cave sex. The dirty cave sex everyone gets, it’s the bioterrorism people wonder about. I’m a lab tech and worked in microbiology a time or two. It’s a fascinating work because the pathogens are right there in front of you, close enough to make you sick if you don’t handle them right. I like to put medical details into my novels, but hadn’t had an opportunity to add much in the way of lab work. With all the media attention on pandemics and infectious diseases, it seemed a good time to write about what would happen if a bad guy got his hands on bacteria that could be used as a deadly weapon.

“I’m so dead.” Dr. Grace Samuels stared at the chessboard. There was no hope. None. Not a single move left open to her.

She sighed, shook her head at the patience on her opponent’s face. “I concede.”

“Want to know where you went wrong?” he asked as he cleared the board. He set the pieces up again. Those big hands of his could bandage a wounded soldier, field strip a 9 mm and box her into checkmate with equal skill.

“I sat down in this chair,” she answered with a straight face. The mess hall was busy with soldiers, American and Afghan alike, either beginning their day or ending their night.

Grace thought about it for a second, but it still didn’t make any sense. Then again, it was 0600 and she’d only been up for twenty minutes. “Huh?”

Special Forces Weapons Sergeant Jacob “Sharp” Foster looked at her earnestly. “You played the board,” he repeated. “You should have been playing the man.”

He winked and she had to fight not to roll her eyes. When she first met him she’d thought his flirting was for real, and had been worried she’d have to shut him down. She didn’t want to, because he was hilarious, but the impropriety couldn’t be ignored. Then, she discovered when he wasn’t on the job, he had a wicked sense of humor, and everyone was a target.

“Then I suppose I’ll have to study you.” She leaned forward and made a show of giving him a thorough once-over.

He grinned and spread his hands wide. “By all means, study me.”

Sharp was a big man, about six-two, and she’d guess he weighed about two hundred pounds. He flexed his biceps and waggled his eyebrows in response to her joke. Though he had brown hair, with a mustache and beard to match, he had the lightest blue eyes she’d ever seen—like looking into glacial ice. 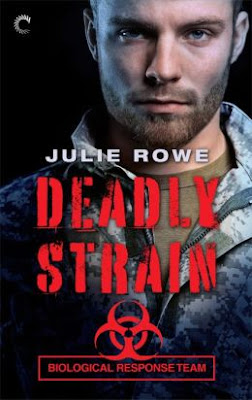 Major Grace Samuels, a trauma surgeon deployed to Afghanistan, spends her life helping her fellow soldiers overcome disease and combat injuries. But her own wounds are harder to heal. Wracked with guilt over the death of a fellow soldier, she finds comfort in her only friend and appointed bodyguard, weapons sergeant Jacob “Sharp” Foster.

Sharp feels more for Grace than a soldier should, more than he wants to admit. When the team discovers a new, quick-to-kill strain of anthrax, he tries to focus on the mission to find its source. He knows he can help Grace defeat her demons, but first they must defeat the deadly outbreak.

Sharp is Grace’s most loyal ally, but in close quarters, he starts to feel like more. She can’t watch someone else she cares about die—but she might not have a choice. The closer they get to finding the source of the strain, the closer it gets to finding them.

Giveaway:
Julie will give out one of the winner’s choice book from her backlist.

About the author:
Julie Rowe’s first career as a medical lab technologist in Canada took her to the North West Territories and northern Alberta, where she still resides. She loves to include medical details in her romance novels, but admits she’ll never be able to write about all her medical experiences because, “No one would believe them!”. Julie writes contemporary and historical medical romance, fun romantic suspense and military romance. She has short stories published in 7 anthologies. Her book SAVING THE RIFLEMAN (book #1 WAR GIRLS) won the novella category of the 2013 Gayle Wilson Award of Excellence. AIDING THE ENEMY (book #3 WAR GIRLS) won the novella category of the 2014 Colorado Romance Writer’s Award of Excellence. You can find her at www.julieroweauthor.com , on Twitter @julieroweauthor or at her Facebook page: www.facebook.com/JulieRoweAuthor

Giveaway ends 11:59pm EST June 21st. Please supply your email in the post. You may use spaces or full text for security. (ex. jsmith at gmail dot com) If you do not wish to supply your email, or have trouble posting, please email maureen@justromanticsuspense.com with a subject title of JRS GIVEAWAY to be entered in the current giveaway.

Be sure to check out the JRS SHOWCASE for additional giveaways!