The more you write, the more addictive it becomes.

The more you write, the more addictive it becomes. If I had know this beforehand I might have taken up, oh, I don't know—marathon walking or scrapbooking instead. I can't imagine not writing. If I’m away from it for more than a few days at a time, I get a little itchy, a little antsy, and, sometimes (I’m told by my family) I’m a little irritable.

I’ve heard writers talk about characters that just won’t leave them alone, and I never understood that whole concept until writing the Elite Ops series. While none of these books have written themselves, and this last one in particular took a bit more time than I’d planned, the stories have come much easier than others I’ve written in the past. For the first time, I hear the characters talking in my head and they don’t let me rest, till I write down what they’re saying. (Okay, that’s a little creepy sounding as I read over it, but you understand what I mean!) 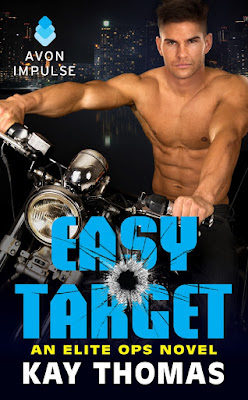 Working on this series has been an addictive writing experience for me. I’ve loved the characters, the locations, the adventure, the growth arcs, and the relationships – particularly Sassy and Hollywood’s backstories in my latest book EASY TARGET.

I knew from their first appearance in HARD TARGET that this hero and heroine would have a shared past, but because I’m a seat of the pants writer, I wasn’t sure exactly what that would mean until I was in the middle of the story with them. I’ve had such fun creating their world and where they came from. I hope you’ll enjoy reading it as much I’ve enjoyed creating it.

In this scene Bryan (aka Hollywood) has just found Sassy in a back alley in Constantine’s Casbah where she was about to be attacked.
***
Bryan spared only a glance for the three men on the ground before holstering his Glock. They weren’t going anywhere. One had a broken neck, the other a cracked skull, and the third would be unconscious for several hours.

He felt the adrenaline spike as he looked at Sassy. Her blouse was torn, and the flowing skirt she was wearing when he last saw her in Niamey was dirty and hiked up to the point where he could see her ripped panties and tell that she preferred bikini waxes over Brazilians. The bra she wore looked like something featured in the X-rated dreams he’d had about her over the past six months, even with a torn strap.

She was shaking like crazy, and her eyes were huge as she stood in the shadowed alleyway. He was shaking himself. So grateful he’d found her before any more damage had been done to her, he didn’t know what to say.

As it turned out, he didn’t have to say anything, because she immediately began peppering him with questions as she threw herself into his arms. “Ohmigod! You’re here. How did you find me? What is going on? Are they dead?”

The questions came with the rapid-fire pace of a machine gun. Even when scared out of her mind, Sassy could pull it together, and she never stopped thinking. As a kid, she could cope with disaster better than anyone he knew, and as an adult, she hadn’t relinquished the title.
A smile tugged at the corner of his mouth, and his body tightened with the inevitable response to that adrenaline dump and the lightning-fast switch from killing a man to embracing an abundant armful of warm woman. He knew the hug was an anomaly and decided he better enjoy it while it lasted.

He took a moment to hold her to his chest. “It’s complicated. I don’t know, and two of them are dead, yes.”

Sassy still clung to him, even as she stilled in his arms and tried to step back. He held on to her a moment longer until her hands changed from grasping him around the neck in honest relief to an abrupt slide across his chest with a red-tipped fingernail. He let her go, but he didn’t want to. The comfort of finding Sassy safe washed over him, along with the realization that no matter how hard he’d tried, he hadn’t been able to stop thinking of her since they’d reconnected last summer after Trey’s arrest. 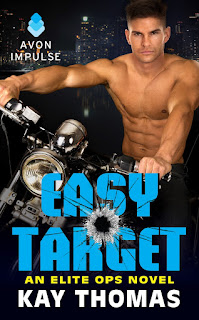 AEGIS: an elite team of ex-military men who will do anything for their country…and their women

Fighting to clear her brother of murder, freelance reporter Sassy Smith is suddenly kidnapped and thrown into a truck with other women who are about to be sold…or worse. When she sees an opportunity for escape Sassy takes it, but she may have just jumped from the frying pan into the fire.

Former Marine Bryan Fisher (aka Hollywood) is no stranger to dangerous situations, or to his best friend's little sister. When he rescues Sassy, Bryan is determined to keep her safe…if he can keep his hands off of her. Because Sassy is all grown up and not at all like the girl he used to know. But he's got bigger problems. And with enemies coming at them from every corner, Bryan and Sassy will need to work together if they're going to survive.