My Crazy Life as an Author

What’s it like to be a published author? I get that question a lot, so I thought I’d answer it by providing a glimpse into a typical day for me.

I wake at 9, have chocolate covered strawberries and champagne, lounge by the pool while the pool boy fans me with a gilt-edged palm frond. Uh, wait. No. That’s fantasy. Let’s talk reality.

First, like MOST authors, I have a full-time day job that pays the bills. Yes, I make money as an author, but it’s never enough and the checks come in sporadically. So, hey, day job.

I also write for two awesome publishers - Avon and Harlequin. Which means two sets of deadlines that often (always?) overlap and can make life really unpredictable and extra crazy.

Every day is different of course, and depends on where I’m at in a deadline cycle, how many books are in the pipeline to be released, what’s going on at the day job, and what’s happening with my family. But here’s a fairly typical day. Seriously. It really is.

5:30am - Shower (sometimes this is optional--did I mention deadlines?)

5:45am- Get dressed (optional on weekends)

11:30am - Sit at Arby’s or in the parking lot and write during lunch hour

5:30pm -  cook (yeah, right, no time for that - usually it’s takeout), eat while watching re-runs of Grey’s Anatomy (my drug of choice)

6:00pm - get a ginormous ice-cold glass of Diet Dr. Pepper, seclude myself in another room to write; work on current manuscript; work on second current manuscript (if have concurrent deadlines on two books - it does happen), do copyedits on another manuscript, do revisions on yet another manuscript, write blogs or answer interview questions for upcoming release blog tour, refresh my Diet Dr. Pepper, research and plan promo for upcoming conference, work on itinerary for upcoming conference, work on ideas for next proposal or work on the proposal, itself, talk a fellow author down from a bridge over the phone because they’re frantic about an upcoming deadline, call an author friend to have THEM talk ME down from a bridge because of an upcoming deadline (at which point I remember the bridges near me aren’t that high, so what’s the point anyway?)

2:00am-wake up, jot down story ideas running around in my head

4:00am-wake up again, read story ideas and cry because they’re illegible and I just KNOW they were the PERFECT ideas and would have made me a multi-millionaire instant bestseller if only I could decipher them but I can’t and I also can’t remember what I wrote…so…I get up and start the same type of day all over again

That’s it. Pretty typical. Notice I didn’t have strawberries or champagne. Maybe tomorrow. 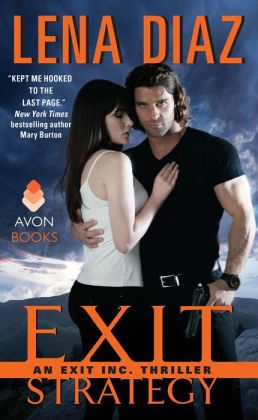 Lena Diaz launches her thrilling new series featuring the undercover vigilantes of EXIT Inc. with a skilled operative putting his life—and his heart—on the line for a woman in trouble

When Sabrina Hightower awakens to the sound of an intruder, she figures he's there to rob her, murder her— or worse. She doesn't expect to be carried off by a muscle-bound stud with male-model good looks . . . or that he came to rescue her.

Mason Hunt became an enforcer with EXIT Inc. to eliminate the bad guys—terrorists, militia groups, all those who would do America harm. But his latest target is innocent. If EXIT could lie about sultry, strong-willed Sabrina, what darker truths might they be concealing?

Going rogue in the rugged North Carolina mountains, Mason risks everything to keep Sabrina close, especially now that EXIT's lethal assassins are chasing them down. The heat is on . . . but it's nothing compared to the slow burn of seduction.

She wrote her first short-story in middle school. This fifty-page tale about a horse race had a wide fan-base, her entire eighth grade class. Lena likes to think they read it because it was so good. But she admits the popularity might have been because her teacher let the kids choose her book for a book report assignment and it was the shortest book on the reading list.

Her first novel-length manuscripts were paranormals ranging from contemporary vampire stories to medieval druid tales. Since dead bodies kept creeping into everything she wrote, she eventually turned to romantic suspense, her current passion.

Since being a Navy Brat means moving – a lot – Lena went to ten different schools in four different states (Kentucky, California, Louisiana, and Florida). But no matter where she lived during her childhood, her father always made a point of taking the family back home to Kentucky every summer to spend several weeks visiting her rather large extended family.

That’s why Lena considers herself a Country Girl even though she currently lives in a city in North Florida. Her fondest childhood memories are of her aunt’s farm where Lena spent her time feeding calves from a bottle, running from billy goats by the catfish pond, and dressing piglets in baby doll clothes.

Today Lena can be found in North Florida with her husband of twenty-plus years.