Congratulations to "Angelica M.", the winner in Carey's giveaway. Thank you to all who participated!

One of the questions I get asked A LOT is why I write thrillers. I mean I get it. I’m a nice pediatrician. I’m a mother. I’m a wife. So people don’t expect me to be spinning scary stories. They expect me to be penning children’s books like Pat the Bunny—not bunny boilers. And I’ve wondered myself, why? Do I have a repressed dark side? Am I secretly a criminal at heart?

Hmm. I don’t think so. In fact, it may be the opposite. I have a fear of the darker elements in the world. But in my books, good always triumphs over evil, and the hero and heroine overcome insurmountable odds to bring about justice. Nothing is impossible. No matter how hopeless the situation, there’s always a way to shine through.

When I write a thriller, I get to vicariously triumph over my deepest fears through the characters. I tend to write about things that scare me, because it’s my way of overcoming fear. When I was young, I watched a classic movie on television called “House of Wax” starring Vincent Price. I had nightmares for years about that movie. In my new release, FALLEN, the victims’ bodies are dumped in Los Angeles tourist traps, and it’s no coincidence that the wax museum plays a significant role in the story.

Out of all my books to date, I have to say that FALLEN, the second book in my Cassidy and Spenser thriller series, was the most fun to write. It features two characters I’ve grown to love, an FBI profiler, Atticus Spenser, and a forensic psychiatrist Caitlin Cassidy.  This time the former rivals turned partners-in-crime-fighting are on the trail of a madman known as the Fallen Angel Killer. The setting is Hollywood, so for research purposes, I explored every tourist trap in Tinsel Town, took star tours, and I even learned how wax statues are made. The book is a thriller, but it has some good times built in. I hope readers will enjoy it, because I certainly loved writing it. 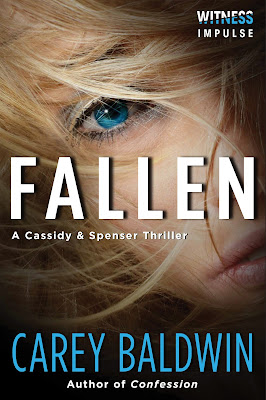 A body just fell from the sky onto Hollywood Boulevard.

When a beautiful prostitute is dumped onto the Walk of Fame, FBI profiler Atticus Spenser and forensic psychiatrist Dr. Caitlin Cassidy are called in to solve one of their most baffling cases yet. The media's dubbed him the Fallen Angel Killer—a crazed murderer who's leaving the bodies of high-priced call girls in Los Angeles tourist traps.

The killer has raised the stakes, demanding that a mysterious celebrity publically admit to his sinful secrets—or he'll dispose of his latest kidnapped escort. With every "john" the team exposes in their search for Celebrity X, another Hollywood secret is revealed and another charmed life is left in ruins. With time running out, Spenser and Cassidy will do anything to find the twisted serial killer…before another innocent woman winds up the next grotesque tourist attraction.

Carey is excited to announce that, Judgment, book one in her Cassidy and Spenser Thriller series, has been named one of the Best Books of 2014 by Suspense Magazine, and is a finalist for both the prestigious Daphne du Maurier award for excellence in mystery/suspense and a Booksellers Best award.

Giveaway:
For a chance for a $20 Starbucks gift card please tell me if you have a trick for dealing with a scary situation. Me? If I can’t write a book about it, I whistle.


Giveaway ends 11:59pm EST June 10th. Please supply your email in the post. You may use spaces or full text for security. (ex. jsmith at gmail dot com) If you do not wish to supply your email, or have trouble posting, please email maureen@justromanticsuspense.com with a subject title of JRS GIVEAWAY to be entered in the current giveaway.
Posted by Maureen A. Miller at 12:30:00 AM