HOW I GOT PUBLISHED

Congratulations to "Brooke B.", the winner in Kat's giveaway. Thank you to all who participated!

May 26th marks the release of the twelfth novel in my Against Series--AGAINST THE TIDE, Rafe Brodie and Olivia Chandlers' story, the third in my Brodies of Alaska.

After writing for so many years, it's almost hard to remember how difficult it was getting my early books sold.  I’m sure every author has an interesting tale of how he or she got published.  In my case, my husband Larry had written an historical novel titled Shadow of the Mast set in early California, but he couldn’t find a publisher.  I loved the book, which was extremely moving and very romantic.

Since I was a voracious reader and adored the book, I couldn’t understand why publishers weren’t snapping it up.  (I still have no clue as to how New York publishers actually think.)
I decided to see if maybe there was something I could do to polish it a little, maybe help it sell.  By the time I was finished, I was hooked on the idea of writing a book of my own.
I chose a western romance because I had a western background, and Magnificent Passage was born.  Now both of us had books to sell, which we tried to do by attending conferences, looking for an editor who might be interested, and trying to find an agent.

At a conference in Fresno, California, we met an agent who agreed to read sixty pages of any attendee’s manuscript.  We sent the pages and the agent took both of us as clients.
Unfortunately, those manuscripts were summarily rejected by every publisher in NYC!  Despair set in.  Picking ourselves up, we each started writing another book.

Months later, the very last publisher my first manuscript had been sent to decided to buy it.  Pageant Books made it the lead title for their new romance line, a great start for me.
During that time, L.J.'s manuscript, his second western novel, Tenkiller, was sitting in the slush pile at Kensington where it had been for nearly a year.  It was picked up, read, and purchased.  After all the waiting, we were published six weeks apart, which meant we could travel and promote our novels together.

The bad news was my first publisher closed its doors after just two of my books were printed and I was out on the street again.  Again, I was rejected everywhere.

Totally distraught, I was trying to bolster the courage to keep writing when, at the last possible moment, Berkley picked up my next novel, Captain's Bride, and again, the book was chosen as a lead title.  Even after that, it was no easy road.

Since those early days, I’ve written for nearly all the major houses.  Some were a real pleasure, others not so much.

Currently, Kensington is publishing my Romantic Suspense novels.  In AGAINST THE TIDE, Rafe Brodie is the captain of a charter fishing boat fleet in tiny Valdez, Alaska.  It's a majestic but harsh and remote place to live.  Fascinated by the new owner of the Pelican Café, Olivia Chandler, Rafe begins to wonder why such a beautiful young woman would want to hide herself away in such a place.

Rafe is determined to solve the mystery, but when his first mate, young Scotty Ferris, is murdered, Rafe has a far more important mystery to solve.

Scott was Liv's friend, too, and she is equally determined to find his killer.  As the clues unfold, Rafe and Liv are drawn into a web of secrets and lies and that lead both of them into danger.

Till then, all best wishes and happy reading, Kat 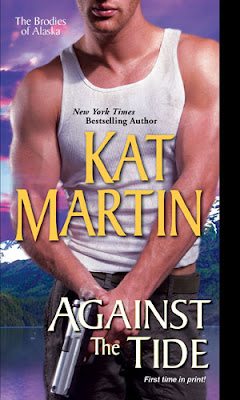 Secrets—and safety—melt under a midnight sun…

Liv Chandler is running for her life, and the cops haven’t been able to do a thing to help. But there’s one man who makes her feel safe, no matter what…rugged charter boat captain Rafe Brodie.

To Rafe, Liv is a beautiful mystery, one he can’t ignore. He means to unearth her secrets, and in the process, if luck is on his side, maybe the spark between them will ignite.

But Liv’s past is more dangerous than Rafe could guess, and when his first mate turns up dead, she fears that she’s next. That there’s something else coming she can’t see. That even Rafe and the remote village of Valdez, Alaska can’t protect her forever…

The piercing ring of the cell phone lying on his nightstand didn’t bode well.  There was no such thing as good news at three o’clock in the morning.

With a sigh, Rafe rolled over and grabbed the phone, scrubbed a hand over his face as he pressed it against his ear.  “Brodie.”

“Police Chief Rosen here.  We’ve got a problem, Rafe, and it’s not a good one.  I need you to meet me down at the harbor.  How soon can you get here?”

Rafe swung his long legs to the side of the bed and sat up.  “Ten minutes.  What’s this about, Chief?”

“It’s Scotty Ferris, Rafe.  I’m afraid he’s dead.  I’ll fill you in when you get here.  I’ll be waiting on the dock next to the Scorpion.”  The police chief hung up the phone.

For several long moments, Rafe just sat there.  His chest felt tight.  Scotty Ferris was twenty-four years old, a handsome, hard-working kid who was engaged to be married.  His June wedding to Cassie Webster, one of the local girls, was only three weeks away.  Cassie was going to be crushed.

Rafe swore softly.  What the hell could have happened?

But in this rugged country where the climate, wild animals, or just bad judgment could get you killed, accidents happened all the time.

Shoving himself up from the bed, Rafe grabbed a pair of worn jeans off the chair and jerked them on, pulled a sweatshirt over his head, pulled on his heavy sox, and shoved his size-thirteen feet into a pair of high-topped, rubber-soled boots.  Since the temperature at night even in late May was still in the thirties and it had rained during the night, he grabbed his jacket as he headed for the steps down to the garage.

The boat harbor wasn’t far from his house.  Sea Scorpion was his flagship charter fishing boat, a thirty-eight-foot Mac, his pride and joy.  It was the boat he usually captained himself, one of three that made up his fleet.  Scotty Ferris was part of Scorpion’s crew.

Giveaway:
Kat will be giving away a copy of AGAINST THE TIDE to one lucky person leaving a comment or email entry.

About Kat:
New York Times bestselling author Kat Martin is a graduate of the University of California at Santa Barbara where she majored in Anthropology and also studied History.   She is married to L.J. Martin, author of western, non-fiction, and suspense novels.

Kat has written more than sixty-five novels.  Sixteen million copies of her books are in print and she has been published in twenty foreign countries, including Japan, France, Germany, Argentina, Greece, China, Russia, and Spain.

Born in Bakersfield, California, Kat currently resides in Missoula, Montana, on a small ranch in the beautiful Sapphire mountains. Her last eleven books have hit the prestigious New York Times bestseller list.  Both AGAINST THE WILD and AGAINST THE SKY, her latest release, took top ten spots.  AGAINST THE TIDE the 3rd book in the Brodies of Alaska series will hit shelves in a couple weeks!

Giveaway ends 11:59pm EST June 2nd. Please supply your email in the post. You may use spaces or full text for security. (ex. jsmith at gmail dot com) If you do not wish to supply your email, or have trouble posting, please email maureen@justromanticsuspense.com with a subject title of JRS GIVEAWAY to be entered in the current giveaway.