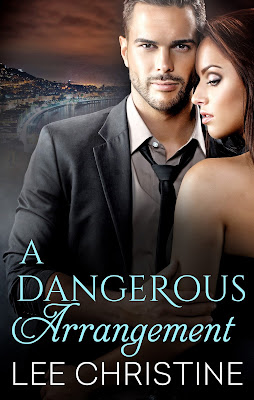 Kicking off a brand new romantic suspense series from Lee Christine comes A Dangerous Arrangement: a violinist with a secret, a billionaire with a problem, and a race against time set against the beautiful Amalfi Coast.

When violinist Marina Wentworth arrives in Venice en route to a cruise ship for a short working holiday, the last thing she expects is to be confronted by a handsome stranger demanding answers. After going to great lengths to keep her real reasons for the trip a secret, Marina refuses to let her immediate attraction to Dean Logan derail her plans.

Desperate to recover his latest super yacht designs, Dean doesn’t want to believe the lovely violinist is involved in the devastating cyber-attack that threatens to destroy his yacht building empire. However his growing feelings for Marina fail to extinguish the nagging suspicion that she is hiding something.

Set against the backdrop of Italy’s Amalfi Coast, Dean and Marina must navigate the dangerous waters of secrecy, attraction, and the fusion of two very different worlds. Will their lives remain discordant, or will they take the chance at true harmony?

Where were you born?
Boston, Massachusetts

Do you mind if I ask how old you are?
Early thirties, but I feel like 25!

What brings you to Venice?
I’m boarding a cruise ship for a working holiday.

So you’re the on-board entertainment?

Not after dinner entertainment. The string quartet will be playing during high tea and the pre-dinner cocktail hour.

How did you score the gig?
Vlad, the cellist, is a friend of mine. We studied together for a time. His wife, Elena, is usually part of the quartet but she decided to skip this cruise and stay home with their children.

What are you most looking forward to seeing?
The Greco/Roman amphitheatre in Taormina, Sicily.  It’s built on the top of the hill and overlooks the village. I’ve heard the views are spectacular and that they still hold live concerts there.

They do. You can see the small coves below and Mt. Etna smoldering in the distance. Did you know the Greeks built the amphitheatre like a miniature Parthenon?
So I understand.

Okay, Marina, a few fun questions. If you were an ice-cream, what flavor would you be?
Salted caramel.

Have you ever stolen a pen from your workplace?
(Laughs) Yes, and a highlighter.

If you could see anyone (alive or dead) perform at the amphitheatre we were just talking about, who would it be?
Luciano Pavarotti.

Author Bio
As a teenager, I had dreams of becoming a singer/songwriter, so my first stories were song lyrics. When I realized I was never going to write a number one hit, I turned my attention to writing novels. After many false starts and two novels relegated to the bottom drawer of my desk, I decided to treat my writing as a day job. In 2012 "In Safe Hands" won the Romance Writers of America Silicon Valley Gotcha Contest, The Romance Writers of America Smoky Mountains Laurie Award and the Romance Writer's of America East Texas Southern Heat Contest for Romantic Suspense. These wins were instrumental in Escape Publishing, Harlequin Enterprises digital first imprint in Australia choosing "In Safe Hands" as one of five launch titles.

My novels are sexy, fast paced and very contemporary. I live on Australia's eastern seaboard, love music and snow skiing with a passion and play alto saxophone for fun.