THIS IS THE WORST BOOK EVER

Congratulations to "Denise R.", the winner in Janie's giveaway. Thank you to all who participated!

Nora Roberts was once asked what her favorite and least favorite of her own books are. Her response:

If Nora Roberts, (NORA ROBERTS, people!!!) dislikes her current works in progress, maybe it’s okay for me to dislike mine too. And trust me, I start hating on my current #WIP every time.  About 1/3 way through the book I start having a total meltdown about my story:

Where in the world am I going with this?
These characters have no chemistry
The plot has so many holes you could strain spaghetti with it
This is the worst book I’ve ever written

With my first couple of books, I said all the above things to my hubby (in between beating my head against my desk) and he very gently tried to help me work out plot points and chemistry issues and red herrings. He’s such a nice guy (and btw, it’s our 18th anniversary this weekend!).

Now our conversation goes more like this:
Me: This is the worst book I’ve ever written.
Him: What are you, about 20,000 words (70-80 pages) into it?
Me: Yes.
Him: With every book you write you say it’s bad at 20k words.
Me: But this time is REALLY is the worst book ever.
Him: You say that too.

Honestly, if I wasn’t under contract with my publisher to submit the book a month or two later, I would probably quit right there and scrap it. But I am under contract (thank God) and so I must push forward to finish it. 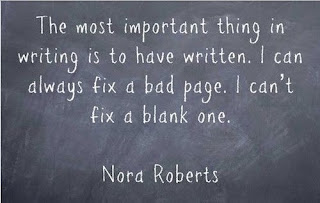 And somehow, by the end, it all seems to come together. It may need some serious TLC in the second draft, but it works. To quote Nora again:

So, encouragement to all writers, whether published or not: keep writing through the hard sections, even when you feel your work might be the worst thing ever written. If you stop, you’ll never know what that manuscript could’ve been. I can’t guarantee which book of yours might sell, but I CAN guarantee which book won’t: the one that never gets finished.

And as further encouragement, realize that you may not be the best judge of your own work. For example, the third book in the Omega Sector Series UNTRACEABLE (that releases this week!) was my least favorite of the four-book series. I thought it was terrible.

Everybody else loved it. Go figure.  RT (Romantic Times) Book Reviews Magazine even gave it a TOP PICK rating for June. So there you go, from worst book ever to TOP PICK.

So if you’re feeling discouraged about your current WIP, just drop me a line on Twitter or Facebook and we’ll commiserate –AND GET THROUGH IT—together.

GIVEAWAY
Win a copy of UNTRACEABLE and an I LOVE romantic suspense notebook OR a $5.00 Amazon gift card to buy the book of your choice by answering the following question: what’s your anti-stress routine? When everything is going wrong what do you like to do to take a break? (Chocolate? A hot bath? A long walk?) 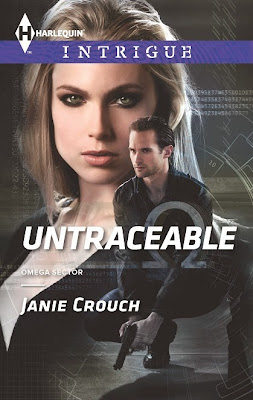 About the Author
Janie Crouch’s debut novel PRIMAL INSTINCT has been nominated for a 2015 RT (Romantic Times) Reviewer’s Choice Award, “Best First Book” in the New England RWA Reader’s Choice Award and “Best Romantic Suspense” in the Carolyn Reader’s Choice Award.  Janie lives with her hubby and four kids in Stuttgart, Germany but ihr Deutsch ist nicht sehr gut zur Zeit. She loves travelling, adventure racing, and movies of all kinds. Find out more about her at http://www.janiecrouch.com

Giveaway ends 11:59pm EST May 19th. Please supply your email in the post. You may use spaces or full text for security. (ex. jsmith at gmail dot com) If you do not wish to supply your email, or have trouble posting, please email maureen@justromanticsuspense.com with a subject title of JRS GIVEAWAY to be entered in the current giveaway.
Posted by Maureen A. Miller at 12:30:00 AM