I recently finished MEN UNDER FIRE, book 3 in the Grayce Walters series, which releases at the end of May. Writing contemporary romantic suspense requires just as much research as historical romance suspense (I also write the Code Breakers series, which is set in the Regency era), but it's a different kind of fact-finding. Since my books are set in Seattle, where I happen to live, it's easy to incorporate my research into other activities.

For example, I volunteer as a children's tour guide and frequently lead groups through Pike Place Market. Because of spacing limitations, many of the marketplace vendors store their inventory in the Sanitary Market food locker. It's rather dark and foreboding -- the perfect backdrop for something sinister or dangerous, don't you agree? 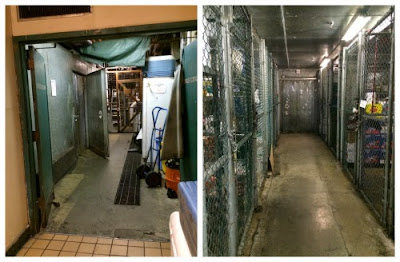 I'm also developing a contemporary female character who is a rocker trying to break into Seattle's grunge music scene. To get some insight into this character, I interviewed Gretta Harley, a local musician. I believe this authenticity enriches my stories so that when readers step onto the page, they enter a world that is part fiction, part fact, but always entertaining and compelling. 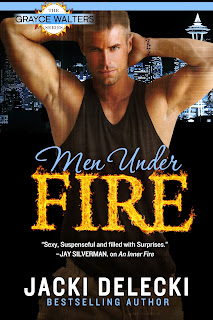 In this opening scene from MEN UNDER FIRE you can see how I incorporated details from Seattle as part of the setting:

Sergeant Nick Welby forced himself to look up at the plane roaring above him and ignore his primitive instinct to break into a run. His heart punched against his chest in painful thuds. A Boeing 737—not enemy fire; Seattle’s Fremont neighborhood—not Afghanistan.

He took a calming breath and then another. The hipster neighborhood filled with buzzing cars and rushing crowds ratcheted his already revved up nervous system, making every sound and movement chafe against his jangled nerves like an open wound.

His military partner, Talley, a bomb-sniffing canine, strained against her lead.

The golden lab, like him, was tense and hyper-alert, waiting for disaster to strike. Both he and his dog were on sick leave. A month had helped to heal their physical injuries, but neither had made progress in calming their vigilant reactions. They both saw and felt danger everywhere, every day.

He stared up at the refurbished warehouse situated on the waterway to Puget Sound. Adrenaline surged through his body at the idea of walking into the unknown building. He was sweating profusely as if he were still in the desert heat instead of the breezy summer day in the Northwest.

A white-and-black sign hung on the warehouse: Grayce Walters, DVM, Animal Acupuncturist. He bent and petted the attentive dog. “I don’t like it any better than you do, but this doctor will help you.”

Nick didn’t have a lot of hope for his own recovery, but he couldn’t let his partner suffer. Doc Samson, the Welby family’s veterinarian, had sworn by the amazing skill of this doctor. He paused and blew the air out of his constricted lungs and then pulled the door open. He’d do anything to help his partner heal from the IED explosion, even walk into this dangerous unknown.

Nick’s mind and body were at ease after the hour with Dr. Walters. Doc Samson was right-on—the tiny woman had special gifts. Having been raised on a horse farm, Nick had immediately recognized the veterinarian’s intuitive connection in relating to and comforting animals.

Simply being in Dr. Walters’ presence was restorative, as evidenced by Talley sleeping soundly on the floor. As Talley’s handler, he was connected to the dog at a level most people couldn’t understand. When his partner relaxed, he felt the same. He couldn’t explain exactly what had happened, but, like Talley, he felt a deep sense of serenity.

For the first time since he had arrived stateside, he could breathe calmly and catch glimpses of the man before the war.

“Sgt. Welby, my assistant will make Talley’s next appointment.” Dr. Walters stood from her desk and walked toward the door. “She should be back from her lunch break.”

He and Talley followed the doctor to the outer office. He was relieved to have only one other stranger to interact with today.

MEN UNDER FIRE, Book 3 in the Grayce Walter series, will be available at online retailers May 26.

Jacki Delecki is a bestselling romantic suspense writer. Delecki’s Grayce Walters Series, which chronicles the adventures of a Seattle animal acupuncturist, was an editor’s selection by USA Today. Delecki’s Romantic Regency The Code Breaker Series hit number one on Amazon. Both acclaimed series are available for purchase at http://www.JackiDelecki.com. To learn more about Jacki and her books and to be the first to hear about giveaways join her newsletter found on her website. Follow her on FB—Jacki Delecki; Twitter @jackidelecki.

Enter Jacki’s giveaway for a chance to win the Grayce Walters Series digital book collection and a $10 Amazon gift card.