Congratulations to Amy P., the winner in Toni's giveaway. Thank you to all who participated!

The fourth Cold Justice Series book features ASAC Lincoln Frazer as the hero. Linc has appeared in all the previous books as a secondary character. He’s got a reputation for being cold and aloof, willing to use anything and anyone to get the job done. In this book we finally find out why he’s the way he is. 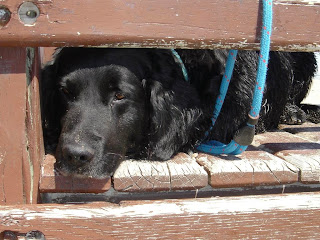 We see the occasional chink in his armor in earlier books—in A COLD DARK PLACE (free right now!) we see him scratching the belly of a scruffy mutt. What I loved about writing COLD FEAR was I was able to give the heroine a dog (this doesn’t happen when characters are traveling all over the world/running for their lives), which meant we got to see Lincoln’s softer side. The really poignant thing for me was I based the fictional dog on my old dog, Benn, who we lost five years ago. We raised Benn from the day he was born, with his mother’s help, and I still miss that dog like crazy. So if you want to meet Barney (or Balmy as Izzy sometimes calls him) read on! 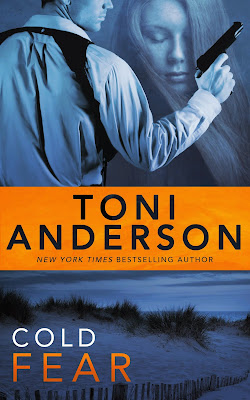 When old evidence turns up on a fresh corpse, ASAC Lincoln Frazer is determined it won’t delay the execution of a convicted serial killer. But when more young women are brutally slain, it becomes clear—this new killer is intimately familiar with the old murders.

Former Army Captain Dr. Isadora Campbell helped her mother conceal a terrible crime. After her mother’s death, Izzy resigned her commission and returned to the Outer Banks to raise her rebellious teenage sister. But it doesn’t take long for Izzy to suspect that someone knows exactly what she did, all those years ago.

If they work together, maybe no one else will die.

With pressure mounting to reopen the old case, Frazer will use any means possible to catch the killer. Thrust together during the investigation, he and Izzy find themselves reluctantly attracted to one another, and begin an affair. Meanwhile the killer is much closer than they think. Izzy’s confession of her secret drives Frazer away as he struggles with her deception. By the time he realizes he’s fallen in love with the stubborn woman, the killer has her. Now the race is on to save Izzy, and any chance of a future they might have together.

Frazer stood in the middle of a shuttered room with Kit Campbell, a younger, less uptight version of her sister, who sat hunched up on the couch. She shared the strawberry-blonde hair and effortless beauty of the doc. He’d bet she had the boys at school jumping through hoops to get her attention and probably didn’t even notice.

The wariness in her gaze was from youth, not experience. Her hands formed fists. Her jaw was clenched. She looked scared and defensive, which didn’t work well when trying to gain information from interviewees. If her sister hadn’t been so overprotective he would have suggested hypnosis, but he’d save that for another day.

Maybe he could work the charm he was famous for in some circles. “How about you put on a coat and we go walk the dog on the beach?”

Kit frowned in sudden confusion and sniffed loudly. “I thought you wanted to talk about Helena.”

“I wouldn’t mind stretching my legs and, yes, I’d like to know more about your friend, Helena. It’s an important part of catching the person who did this to her.”

Huge, grief-stricken blue eyes latched on to his—as if she’d finally realized this wasn’t about her. She nodded and stood, then disappeared down the hall, presumably to put on some extra layers of clothes.

The dog nudged his hand insistently. Frazer had always been a sucker for animals. His ex had taken their dog, saying he spent too much time at work to take proper care of him. To forget the rest of what she’d done he gave the hound a good rub. He didn’t have time for a pet in his life because his hours were insane, but he missed the uncomplicated affection.
He looked up, wondering where the teen was. The gloom of the room was depressing. He walked across to the French doors, went outside and pushed back the storm shutters, latching them on the outside. He came back inside and closed the door to keep out the freezing wind. Even though the sun was going down, the natural sunlight helped relieve the shadows. Barney wagged his tail in approval.

He used the alone time to snoop. The floors were hardwood with brightly colored area rugs strewn throughout. A medium-sized fake Christmas tree stood in the corner, but the lights weren’t turned on. There was a pale blue sofa dotted with lacy white and flowery cushions, a pure white armchair which seemed risky considering Barney who was following him around like his new best friend, waiting for him to do something interesting. A pink poinsettia sat on the dining room table, pots painted in pastel colors lined the windowsills. And plants everywhere. Lots of healthy looking plants.

His ex had once said not even a houseplant could survive his neglect. Now he had an office full. Not that he was bitter.

He’d always known exactly what he was going to do with his life, something his ex had failed to understand even though he’d told her from the very beginning. Law enforcement sounded a lot more glamorous than it was. The majority of marriages didn’t survive the pressure—another shitty statistic from a job that took as much as it gave. But he wouldn’t swap it for the world. He’d been offered far better paying positions and turned them down without a single regret. He was meant to hunt killers.

A graduate of Marine Biology from the University of Liverpool, and the University of St. Andrews, Toni was a Post-doctoral Research Scientist for several years, and travelled the world with her work. After living in seven different countries, she finally settled in the Canadian prairies with her Irish husband and two children. Now she spends her time talking to the voices in her head and making things up. Toni has no explanation for her oft-times dark imagination, and only hopes the romance makes up for it. She’s addicted to reading, dogs, tea (never travels without it), and chocolate. She loves to hear from readers.