Congratulations to "Amy P.", the winner in Rowena's giveaway. Thank you to all who participated!

Before I became a writer, I was a huge reader (still am, in fact). I devoured mysteries, thrillers and crime novels of all types with little thought other than that I loved the puzzle of them—who did it; why; would they be caught, or very occasionally, would they get away?
When I could no longer resist the urge to create my own stories, it was probably natural that they were filled with these questions.

It was only when I began pitching to publishers that I realised how important it was to establish—and fit—a genre. ‘Crime’ I happily told them. Only to hear that to fit the crime genre I must have a ‘body on the first page, always.’ My next attempt at pitching was to declare I wrote ‘Mystery-driven women’s fiction’ only to be told ‘more relationship, please, less mystery’. It was only when I decided to just keep writing what I loved and damn the consequences that I realised I was writing suspense (and found publishing success).
I like to write about fractured families and the discovery of old secrets that could just as easily splinter them permanently or begin the healing process. And of course, the secret is usually involves some type of simmering crime just waiting to explode into the present. So I thought I’d identify three factors that helped me realise I was writing suspense.

With this type of suspense there is often the use of dramatic irony—the reader knows something a character doesn’t. It’s pacey with high-stakes. Make those stakes the fate of the world and you’ve got yourself a thriller. In All That’s Left Unsaid the stakes are initially very personal: Harriet wants to reconcile with the mother she’s always felt rejected her. Yet as Harriet begins her Italian odyssey to learn about her mother’s past, every stone she overturns increases the stakes. Can she stay alive long enough to expose the truth and unmask a killer?

2. I never saw that coming!

I love a good twist (or three!). Particularly when they cast everything that has gone before in a new context. Think of how well The Sixth Sense worked and yet how much richer it was once the twist was revealed. To work best, clues must be planted throughout, not so apparent as to give the twist away, but completely obvious once the truth is revealed. Dorothy L. Sayers habitually planted clues in plain sight, but surrounded them with so much distraction they were easy to overlook until you knew their importance. I can’t give too much away about how I may have used twists in All That’s Left Unsaid, but I can tell you Harriet is named in honour of my favourite Sayers character, Harriet Vane.

Did I mention I love a puzzle? Well, this question of what’s really going on is what keeps me reading late into the night. This is when there’s a whole other story going on below the surface, and when revealed it casts the character motivations into an entirely new light. All That’s Left Unsaid is written from Harriet’s point of view and I took full advantage of the subjective nature of truth—every piece of information changes how she views the ‘truth’. Should she trust Antonio, the handsome bar owner who seems far too interested in her to be believable? Can she rely on what the homeless man tells her about the past? What really happened at the villa all those years ago? Why won’t her mother speak about it?

When I look back at my favourite books it is these three elements that ramp up the tension. It’s no surprise they’ve each made their way into All That’s Left Unsaid.

So what do you think, are these elements essential to suspense? What ramps up the tension for you?

Giveaway:
To win an ebook (mobi or ePub) of All That’s Left Unsaid, simply answer, "What ramps up the tension for you?" Also see the JRS SHOWCASE for more chances to win with Rowena! 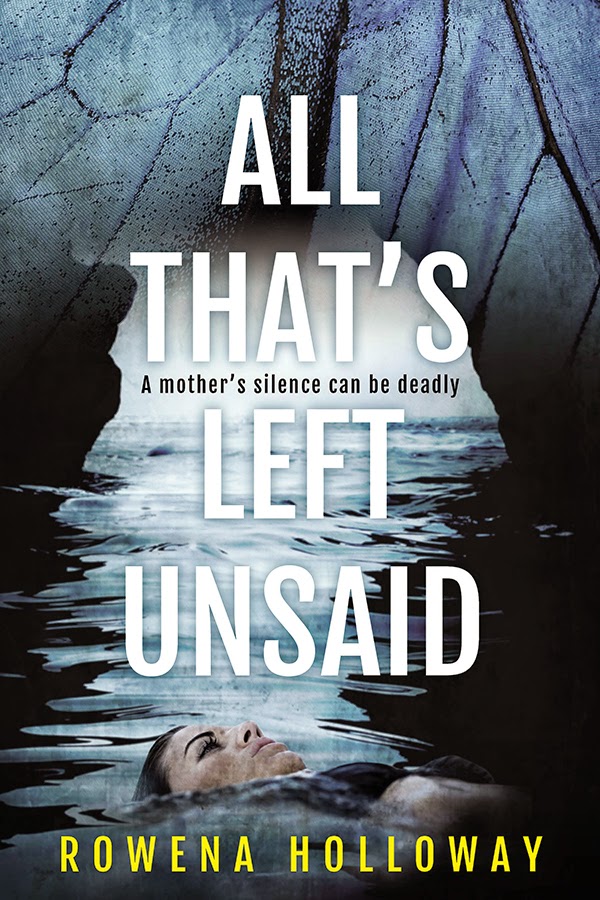 In the dark chasm of Italy’s past some things are best left buried.

‘I think my friend is dead!’ she said.

My mother hasn’t heard from this friend in more years than I’ve been alive, has never, in fact, mentioned her name. Yet this stranger—a pile of bones retrieved from a chasm on the Amalfi coast—is suddenly the most important person in the world to her. All my life, I’ve waited for my mother’s affection. Now I must compete with a dead woman.

Intrigued to learn her mother once lived in Italy, a secret she has kept for thirty years, Harriet (Harrie) Taylor accepts the challenge to determine if the remains known only as the Positano Skeleton belong to her mother’s long-lost friend. It’s as good an excuse as any to escape Australia and the stench of career failure. And succeeding just might prove her worth—as a journalist and a daughter.

Harrie finds beautiful Positano isn’t quite the sun-soaked paradise of the holiday brochures, despite the attentions of sexy bar owner, Antonio. No one wants to talk to a foreigner about the skeleton or the past, least of all the local commissario who has fresher bodies to worry about. How can she probe old secrets when she doesn’t even speak the language? Then a homeless man hands her a photograph and Harrie is forced to question how far she will go to find the truth.

ABOUT ME
I’m an Australian writer of novels and short stories. Before settling on writing as a career, I tried a range of jobs, all of which convinced me fiction writing was preferable to the real world. Under the working title ‘Out of the Abyss’, her first novel was a semi-finalist in the 2010 Amazon Breakthrough Novel Award. Her short stories have been included in the Stringybark anthology Yellow Pearl and the 2011 Anthology of Award Winning Australian Writing. I indulge my love of books and writers by interviewing authors and reviewing fiction across a range of genres. All of which can be found on my website.

See the JRS SHOWCASE for more opportunities to win with Rowena!


Giveaway ends 11:59pm EST April 28th. Please supply your email in the post. You may use spaces or full text for security. (ex. jsmith at gmail dot com) If you do not wish to supply your email, or have trouble posting, please email maureen@justromanticsuspense.com with a subject title of JRS GIVEAWAY to be entered in the current giveaway.