Forsaken the final book in the Fallon Sisters Trilogy and Giveaway 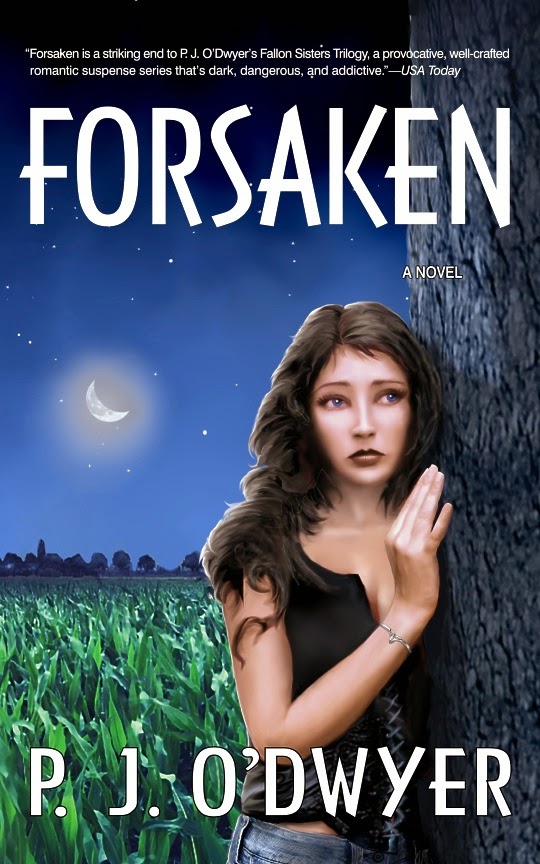 A trifecta of trouble for one man, and a horse race meant to be won . . . by one woman.

On her own since the age of sixteen, after the death of her dear ma, Irish barmaid and racetrack groom Dani Flynn works three jobs to stay afloat. Only it’s the third one—the one along the docks after midnight—that just might find her at the bottom of the Irish Sea. Running for her life with a thumb drive that could bring down all of Parliament, Dani does the sensible thing. She hops a freighter, destination unknown, and spends a week on the high seas.

Curse or Divine intervention, Dani can’t decide which when she finds herself docked in the U.S. penniless, illegal, and within two hundred miles of a farm called Grace. Swallowing her pride and twenty-six years of resentment, she makes her way to the one man she swore she’d never have anything to do with—her da.

Handcuffed, frisked, and charged with assaulting a police officer isn’t casting her in a warm glow of endearment nor keeping her illegal status under wraps. But when a little scrap of paper called a birth certificate proves her claim, she’s met with open arms and even finds a home away from home at a Thoroughbred training center. Except it’s not her family’s blessing she needs. Nor a maddening attraction to the one hell-bent on sending her home—the cop she sunk her teeth into while trying to escape. The sparkling shores of freedom may not be enough to keep her past from catching up with her. Especially since blending in and keeping a low profile proves difficult when Mr. Law and Order, in the form of a gorgeous American sheriff, is doing his best to unearth her past.

Kevin Bendix never came out on top as a kid against the Fallon sisters. As the Sheriff of Washington County, it’s not as simple as taking his licks and calling it a day, especially now that there are three. Win or lose, he’ll uphold the law and defer to his training. He knows a liar when he sees one. Only Dani Flynn isn’t your average lawbreaker. She’s female and all of about five-foot-two with a face of an angel and a body of a sinner.

He’ll get to the truth. It’s his job. But in the end, he could lose more than his quiet way of life. It’s not only his heart she’ll steal. Loving this woman could cost them both their lives.

“1,000% recommended. Touching and true, this novel [Forsaken] will stay with me for a long time. Don’t miss it. It deserves to be at the very top of the bestseller charts.”
—Laurence O'Bryan, bestselling Harper Collins author of
The Manhattan Puzzle, translated into ten languages

“Money, privilege, horses, and the luck of the Irish are all bound up in a saga of high stakes in Forsaken.” 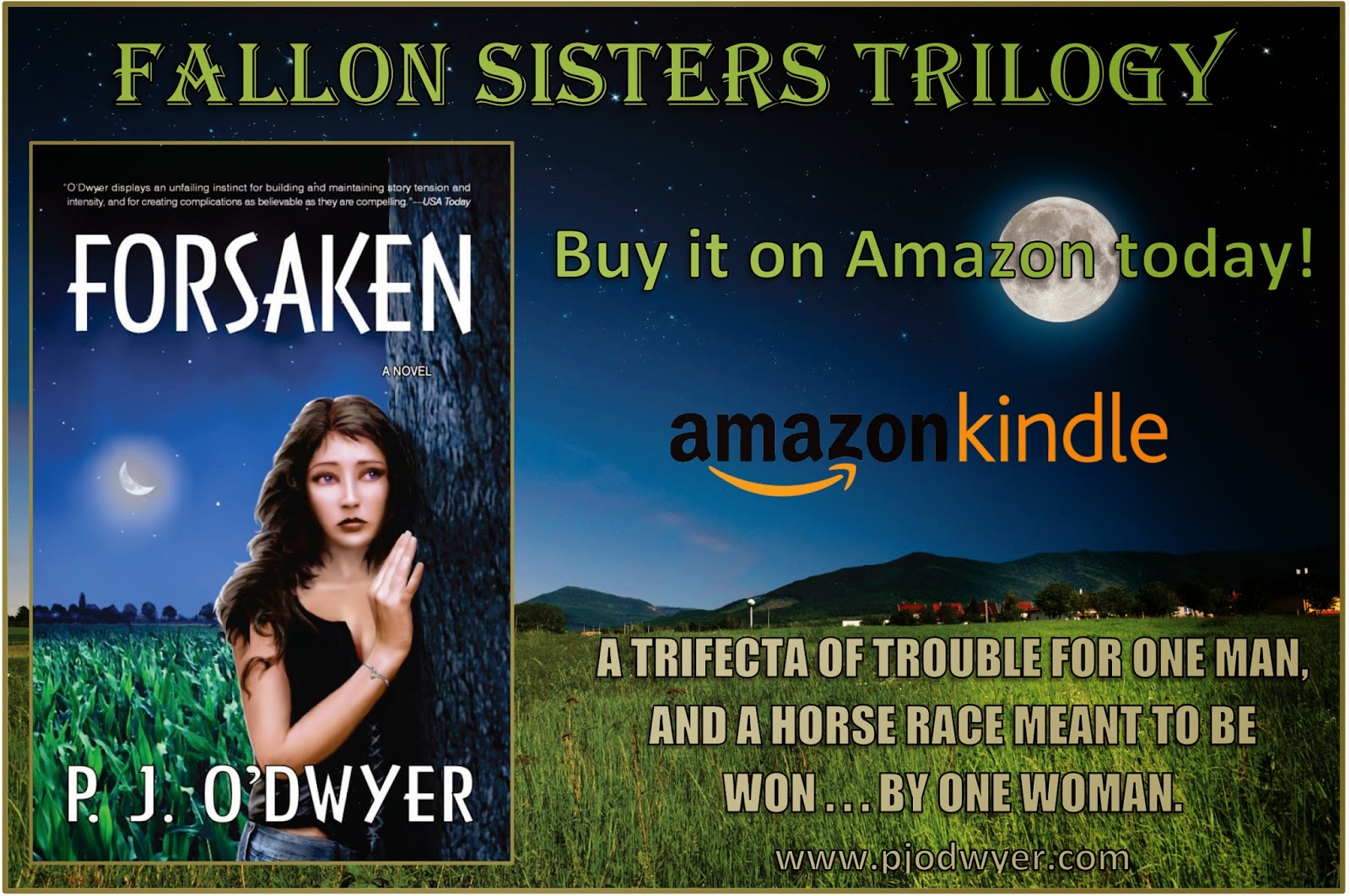 He pulled her hand down and kept it in his. “Irish, we need to get a couple things straight.” He looked pointedly at her. “When I ask you to do something it’s because there’s a good reason—not because I’m some prick who gets off on ordering a woman around.”

He was talking about last night at the party. She realized now how stupid she’d been, but at the time, she was upset and trying to avoid him. “It was lucky you came after me. Otherwise I don’t think I would have found me way out of the woods.”

“You knew I would.” He dipped his head. “Just like you know I’ll never lie to you.”

Meaning he knew she was keeping secrets of her own.  Dani fidgeted under his intense gaze. “I’m . . .”

“Afraid. I get it.” He shook his head. “I know I’ve said this before, but eventually you’re going to have to trust someone.” He lifted her chin with his finger. “That someone is me.”

She nodded. “It’s not so easy. I don’t want to remember. I want to forget.”

His hands went around her bum, and he took a step closer so he stood between her thighs. “Then be honest with me from here on out about this,” he said, the rasp of his voice urgent before he leaned in.

His eyes remained open like he might miss some telltale sign in the depths of her eyes as he moved closer. If he did or didn’t eventually shut them, she couldn’t say, because hers were closed the moment he pressed his firm, perfectly sculpted lips to her mouth. Dani tingled and drew her arms around his neck. He was older, experienced, yet trembling in her arms. Kevin Bendix could teach her the finer points of lovemaking, she was sure. His kisses were deep and ardent, making her stomach flutter with the newness of a budding, starry-eyed relationship. But tonight, under a nearly full moon with only the gentle breeze as witness, Dani learned that he was just as vulnerable as she.

The revelation brought tears to her eyes. She didn’t want to hurt him. Dani pulled away, whisking a tear from her cheek. “You’re going to make me fall in love with you.” She gave a nervous laugh and caressed the rough angles of his face. “It’s not fair, you know. Being so bloody handsome and kissing a woman like you really mean it.”

P. J. O’Dwyer donates ten percent of all book and jewelry sales to horse rescue to help in their mission of rescue, rehabilitation, and education.

P. J. O’Dwyer is an award-winning author of young adult and romantic suspense. She’s an active member of Romance Writers of America. When asked where she gets her story ideas, she laughs ruefully and says, “It helps being married to a cop.” She lives in Maryland with her family.