Congratulations to "Erin F." the winner in Elizabeth's giveaway. Thank you to all who participated!

Ten years ago, after she was abducted and attacked, Maggie Delacorte made a pact with her older brother and her best friend: join the FBI.  Stop what had happened to her from happening to others.  But when the Fishhook Rapist sends Maggie a note telling her that he’s coming back for her on the anniversary of her attack, everything changes.

Back then, Maggie was a naïve college student.  Now, she’s a toned, trained FBI agent whose hands are as dangerous as a gun.  But the mere thought of the man who has evaded capture for a decade makes her hands sweat and her trigger finger shake.

Still, she’s never been the type to run and hide.  As the only woman on her SWAT team at the FBI’s Washington Field Office, her teammates like to use her to prank the newbies.  “[O]ne of her teammates’ favorite ways to initiate the newbies was for her to walk up, hold out a limp hand for them to shake, then promptly flip them to the ground.”  Maggie’s attitude on that?  “Drop a guy on his very first day on SWAT, and he wasn’t likely to go easy on her just because he was a woman.”

Maggie’s strong, capable, and her attitude is that she doesn’t need to be bigger than her opponents.  She just needs to know how to leverage her strength, and the skillset the FBI taught her.  When it comes to the man who attacked her when she was a young college student, Maggie refuses to sit idly by while others investigate.  But when the Fishhook Rapist decides the best way to get to her is to target those close to her, her teammate Grant Larkin won’t let her face the Fishhook Rapist alone.

Maggie met Grant on his first day on SWAT – and like she did with all the newbies, she flipped him.  Unlike the rest of them, he pulled her down with him.  And then he offered her a hand as he got to his feet, laughing.  For Maggie, that was the moment she fell for him.  And as she finds out in the course of the book, it was the moment he fell for her, too.

It was a lot of fun to create Maggie and Grant – they’re both physically capable, and really well trained.  And they’re both FBI, so they’re used to tackling tough cases.  But pitting them against a predator this savvy, with targets this personal, was a good way to force them to face not just their fears for each other’s safety, but also to trust each other when the stakes are the highest.

Here’s a little snippet from the beginning of SWAT SECRET ADMIRER.

The words echoed in Maggie Delacorte’s earbud as her SWAT teammate stepped back from the neat hole he’d cut in the window. Behind her, everything was quiet in the predawn darkness.  But that wouldn’t last for long.

The FBI had gotten word that a wanted fugitive was hiding out in this gang-infested part of DC, armed with an AK-47 and surrounded by a pack of die-hard supporters. Maggie and his teammates were here to make sure his time on the run was finished.

She moved quickly forward, tossing a flash-bang grenade through the window. The world in front of her exploded in white light, a massive boom echoing as the flash bang landed.  Smoke billowed, providing cover.

“Go, go, go!” Grant Larkin yelled in that deep voice that always sent goose bumps running up her arms, as he used a ram and his massive upper body strength to break down the door…. 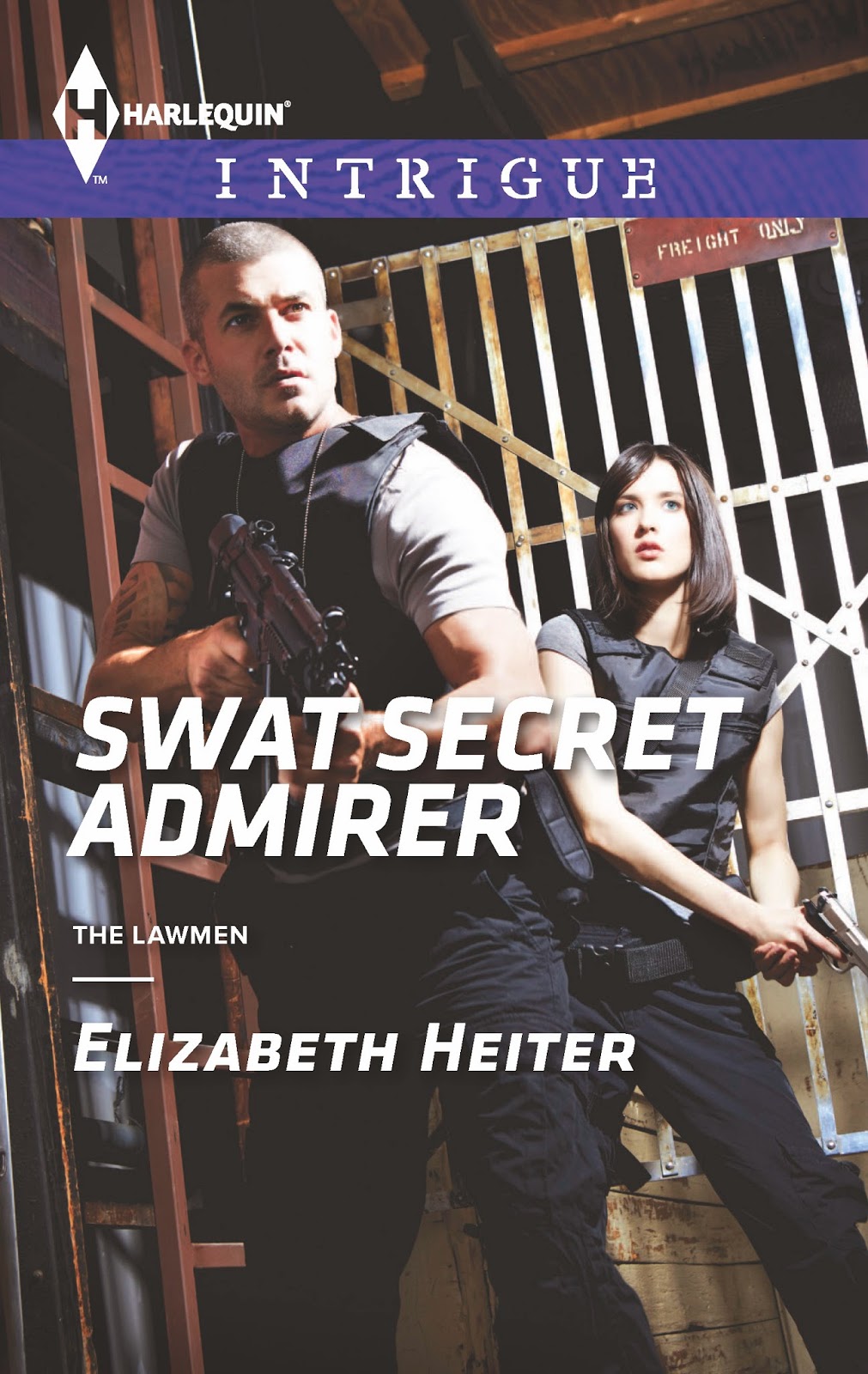 A predator is no match for her protector...

It's been ten years since the attack that drove Maggie Delacorte to become an FBI SWAT agent. She's an elite fighter now—and when the Fishhook Rapist sends her a letter saying he's coming back for her, she knows she has to find him first. Her teammate Grant Larkin is assigned to the case, and he's determined to protect Maggie, even if it damages the connection that's been growing between them. And even if her attacker has decided that the way to get to Maggie is by targeting the people she cares about. Her feelings for Grant could get him killed, but she needs him—and his love—to make it through the worst danger yet...

Giveaway:
I’m giving away one copy of SWAT SECRET ADMIRER to a commenter or email entrant!

Elizabeth graduated from the University of Michigan with a degree in English Literature.  She’s a member of International Thriller Writers and Romance Writers of America.  NYT bestselling author Jeffery Deaver said of VANISHED, the most recent book in her Profiler series, "Gripping from the first page, Vanished will keep you on the edge of your seat all the way to its searing conclusion.” SWAT SECRET ADMIRER, the most recent book in her Lawmen series, was a Top Pick from RT Book Reviews.


Giveaway ends 11:59pm EST March 15th. Please supply your email in the post. You may use spaces or full text for security. (ex. jsmith at gmail dot com) If you do not wish to supply your email, or have trouble posting, please email maureen@justromanticsuspense.com with a subject title of JRS GIVEAWAY to be entered in the current giveaway.
Posted by Maureen A. Miller at 12:30:00 AM