Congratulations to "Erin F", the winner in Maureen's giveaway. Thank you to all who participated!

This is a rare opportunity for me.  I don't usually get to come out from behind the curtain at JUST ROMANTIC SUSPENSE, but we had a cancellation today so you are stuck with me! :) 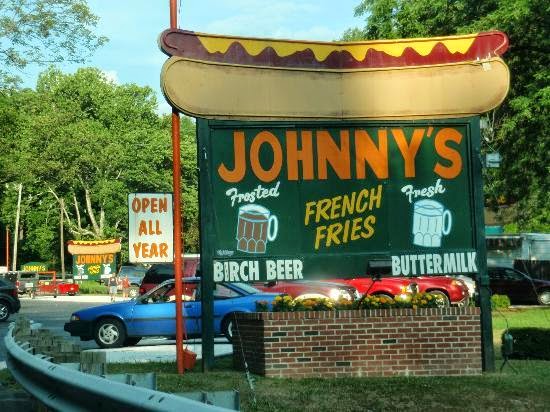 People often ask, "Where would you go if you could go anywhere on the planet?" Well, heck, that's simple. Hot Dog Johnny's in Buttzville, NJ.  Seriously! Those from New Jersey might remember this essential family stop on Route 46.

I have since moved away from New Jersey, so when asked that question....Hot Dog Johnny's is the spot!

This great big planet of ours is beautiful, and there are so many exotic destinations that I'm sure we all dream about someday seeing. And on those rare occasions that we do get to go somewhere, what do we do, take pictures? Have fond memories? Yes, but I'll be honest. My entire being focuses around food. :)

It doesn't have to be fine dining in Europe. A trip to the local pizzeria is as memorable to me as any exotic meal abroad. I love food!

In my Romantic Suspense novel, SHADOW, the heroine moves to London. Just as important as researching the sights and sounds of the city, is the in depth probe into local foods. I've been to London several times, but that didn't stop me from scouring every pub menu I could find online. (God bless the internet!)

Giveaway:
Today I'm giving away a quick little $5 Amazon gift card so you can buy yourself a book or two, or even a hot dog. I'm sure Amazon is selling hot dogs by now. I'll probably be able to have Hot Dog Johnny's delivered by a drone soon!

Where are some of your favorite places to eat food? :)

The Shadow was watching her again. Sometimes he would approach. On those occasions she tried to run. Running was pointless, though. He would always return. And he would always ask the same question−over and over…

Where is Nathan Bethard?

Sophie's boss has skipped town, abandoning their counseling firm. Now a stranger is stalking her.  In an attempt to flee him, she seeks a new job...in London.

Does The Shadow really have evil intentions, though? Is there more to him than Sophie originally thought? Maybe The Shadow is in fact her only protection.