Congratulations to "Jonetta" and "JoAn", the winners in Dianna's giveaway. Thank you to all who participated!

Shhhhh.  Dianna is still in the cave working on a new book, so we decided to come tell our side of the Slye Temp series, but if Dianna asks, we don’t know how you got this information.  Okay?

Who are we?  The Slye Temp agents, and some significant others who really shouldn’t be here, and, well, one person who just butts in on occasion.

Margaux Duke:  (interrupts) I’m first because I’m Dianna’s favorite.  (laughs at all the shouting from behind her, then looks over her shoulder)  Get over it.  (turns back to readers) KISS THE ENEMY is already out, but she’s still got plans for me and Logan in the HAMR Brotherhood series.  (glances around)  Crud.  She really will kill all of us if I tell much about that.  Okay, I’ll make it fair. We can take turns telling on Dianna.  (group starts smiling)

Dingo:  Back off, Margaux.  You and Logan had your story. It’s time for my and Valene’s story in STOLEN VENGEANCE.

Margaux: (rolls eyes) From what I heard, you had your chance and blew it.  I don’t know why Valene would give you the time of day right now. I wouldn’t if I were her.

Dingo: Knock that off. It’s a long story and I don’t have to explain it to you.

Margaux: True.  (grins wide)  But I looked over Dianna’s shoulder when she was writing and you are so not going to like what you have coming up.

Logan Baklanov: (steps up behind Margaux and wraps his arms around her)  Don’t torture Dingo any more than Dianna has already has, babe.  I had something I wanted to show you in our hotel room, but if you’re too busy…

Margaux: (laughs)  Actually, I think Dingo and Valene should tell their secrets.

Valene Eklund: (yells from across the room)  Dianna must have been out of her mind to think I would waste another second on Dingo after what he did.  Did that stop her? Nooooo.  And look at him over there.   He looks like some late-night desert that would be great eaten naked and… argh!   You know what?  I’m the one who butts in uninvited, and now I’m going to share something on Dianna.  (all heads turn to Valene) Dianna would rather spend the day fishing with her honey bun than travel to Europe.  And one of her favorite fishing spots is on the docks at The Grand Marlin in Pensacola Beach, FL.

Dingo: (takes a step Valene’s way)  Shush! You can’t say that in public!  You can’t give away where we all hang out. Don’t you realize that’s a security risk?  (sees Valene’s ashen face and stops in his tracks)   Aw, crap.  Listen, Val, I’ll tell one better, so she’ll be mad at me instead of you.  Dianna loves to watch movies with her honey bun and can’t watch a movie without eating popcorn, which is why she’s so grumpy right now. She hasn’t been in the gym for a few weeks and won’t eat popcorn until she goes back.  In the meantime, she’s taking all that grumpiness out on us.  Me, to be specific.

Valene: (jams hands on hips)  You aren’t the only one with battles to fight, mister.  You should see what she has me doing.

Dingo:  I have seen and I intend to have a talk with Dianna as soon as someone takes her keyboard away so she can’t do anything else to me. (studies Valene) At least she left you smokin’ hot.

Valene: (frowns)  Would have been nice if you’d noticed back when we were together.

Dingo: (grumbles under his breath)  I missed nothing about you.

Valene: (Looks away, hurt) Just as I thought.

Dingo: (frowns, thinking about what he said) Hold it. I didn’t mean it that way.

Valene: (storms forward)  Right, just like you didn’t mean to crush my heart?

Tanner Bodine: (barges in)  Okay cut it out you two, or we’ll all be doing hard time in the next book.

Margaux: (grinning even wider) Ah, come on, cowboy.  I was about to send out for popcorn for us.  This is a good show.

Dingo: (looks at Val’s hurt face and glares at the other agents) Knock it off, Margaux.  Never  forget, paybacks are a bitch.

Margaux: (lets out a heavy sigh) Have you ever known Dianna not to give her characters the HEA they deserve?

Tanner: (shrugs)  Tough titty. Get out of here until March 30th or Dianna might change her mind about you two.

Valene: (freezes, then wheels around and takes off) Screw this.

Dingo: (gives Tanner a narrow-eyed look of threat)  You are not helping.

Tanner:  (gives a big cowboy grin)  Maybe not, but I’ve got my HEA and now I get to watch you suffer, sucka.

Margaux:  You do know that’s why Dianna writes these romantic-thrillers – to entertain herself—right?

Tanner:  And the readers.  Don’t forget about them.  I think she’d have quit a long time ago if it weren’t for the readers.

Dingo:  You got that right, mate. She’d have quit  for certain after you and I took that little jaunt into North Korea in DECEPTIVE TREASURES.

Dianna: (walks into room and glances around) What’s going on here?  I didn’t call a meeting.

Slye agents scatter except for Margaux and Logan

Margaux:  Oh, nothing you need to kno…uh..worry about.

Dianna: (Sticks hands on hips) I smell a rat.

Dianna:  (smiles wide, distracted by readers) Oh, hey everybody!  So glad you stopped by! I needed a break from the writing cave.  You wouldn’t believe the trouble Dingo is giving me.

Margaux:  (Snickers and dashes for the door, pulling Logan behind her) Gotta go. We have…uh…an appointment.  (Logan grins as door closes)

Dianna:  What was that about? (turns to readers)  Since you’re here, let’s chat a bit. I’ve got some goodies to give away, and we’ll choose two winners.  If your name is drawn, and you’re willing to wait until March 30th for STOLEN VENGEANCE, you’ll receive the e-book as soon as it’s available.  If you’d rather have your prize now, you’ll get a Slye Temp e-book box set (first 3 novels). Either way, you’ll also receive a set of signed Slye Temp Keeper Kase® Cards via snail mail.  (Amazon or Barnes & Noble account required to receive e-book gifts).

To enter the drawing, tell me whether you’d like STOLEN VENGEANCE or the Slye Temp Box Set (see the comment above) and help me out by answering a question.

When I get even a short  break from the writing cave, I love to ride motorcycles with my husband.  We’ve ridden back and forth across the country more than once, and I’m always looking for little out-of-the way places to stop on our trips. On my next motorcycle ride, where would you tell me to go, and why? 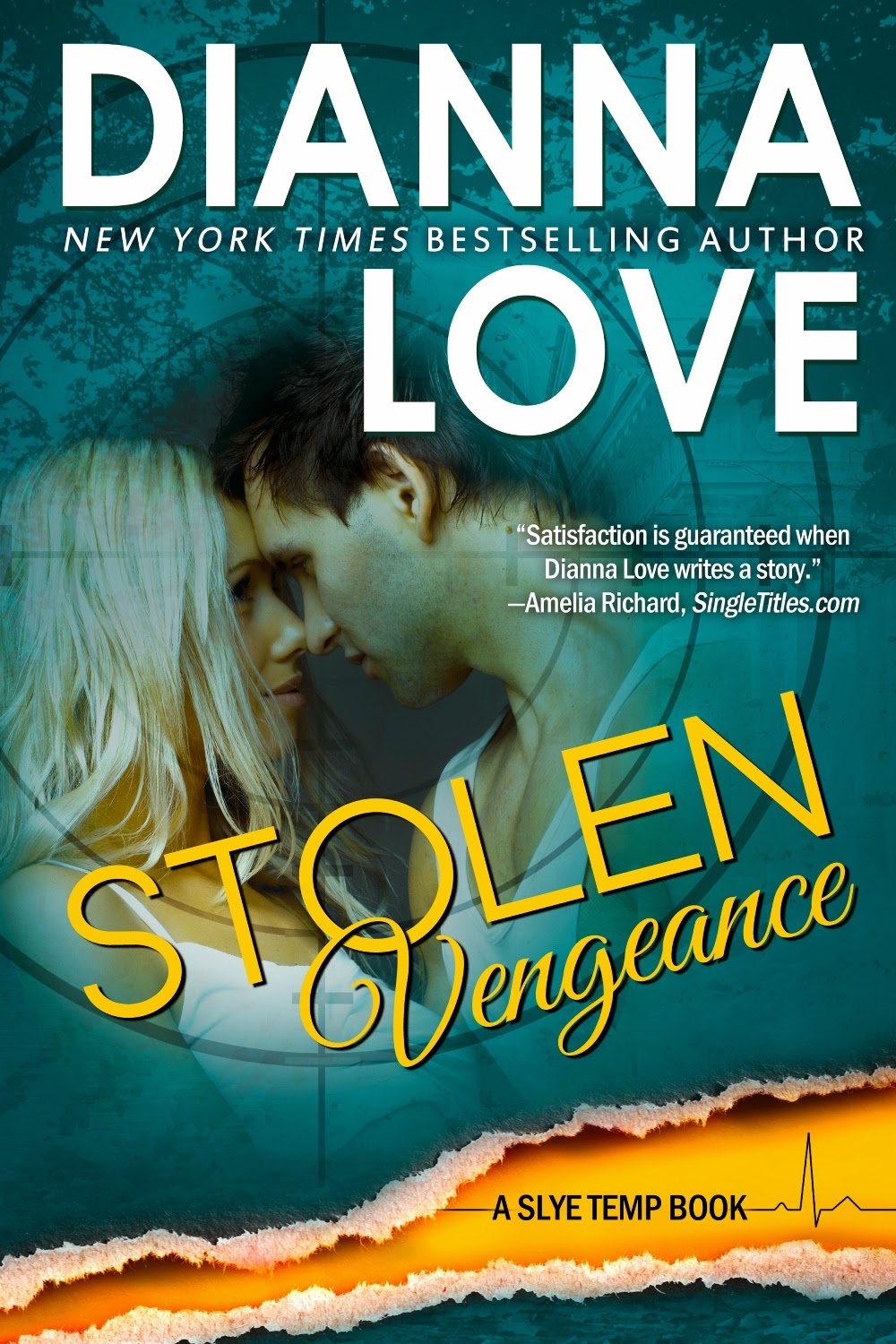 He's the last man she'll trust and the only one who can save her.

Slye Temp agent Dingo Paddock walked away from rare items recovery specialist Valene Eklund seven years ago to protect her from a deadly organization, but the woman can’t stay out of trouble.  Valene hasn’t forgiven Dingo for breaking her heart when he disappeared without a word. The last thing she’ll allow is for him to interfere with her new client whose contract will dig her out of financial ruin. She’s lucked into a deal that only comes along once, but Dingo believes the price is too high – her life - and now the organization he destroyed to keep her safe has returned to exact vengeance on Dingo.  Getting their hands on the one woman Dingo would walk through fire for? Priceless.

If Dingo and Valene can't overcome their past and learn to trust again, an assassin will kill a key global figure on US soil, igniting the fuse to an international conflict. They can't save the world until they figure out how to save each other first.
PREORDER Now - Kindle or iTunes

Giveaway ends 11:59pm EST February 26th. Please supply your email in the post. You may use spaces or full text for security. (ex. jsmith at gmail dot com) If you do not wish to supply your email, or have trouble posting, please email maureen@justromanticsuspense.com with a subject title of JRS GIVEAWAY to be entered in the current giveaway.