What's Love Got to Do With It: Marriage with an Agenda

While some cultures still practice arranged marriages, most contemporary societies believe the foundation for marriage should be love. This is a fairly recent shift in perspective. For many centuries, marriage was a strategic decision made for political alliances, financial gain, expanding land holdings or advancing social status.

"What marriage had in common was that it really was not about the relationship between the man and the woman," said Stephanie Coontz, the author of Marriage, a History: How Love Conquered Marriage (Penguin Books, 2006) in the article History of Marriage: 13 Surprising Facts. "It was a way of getting in-laws, of making alliances and expanding the family labor force."

For historical authors who incorporate suspense and intrigue into their plots, the "strategic marriage" concept opens up the potential for all sorts of emotional conflict and plot twists. My series, the Code Breakers, is set in Regency England, and I've had great fun with this angle. During this time period, British and French aristocrats were all were connected by marriages and alliances, and the division of classes also meant they socialized together. This makes a great area for creative license to develop spies who are conflicted over family loyalties vs. country loyalties. And it also makes for excellent double agents which I did in A Code of Love, Book 1 in the Code Breakers Series. In A Christmas Code, the romance is derived from the familiarity within the closed aristocratic society. Gwyneth is in love with her brother's best friend. She has grown up with him and now is in constant contact in the small social circle of the Ton.

What are your thoughts on how historical authors use social norms as part of their story plots? 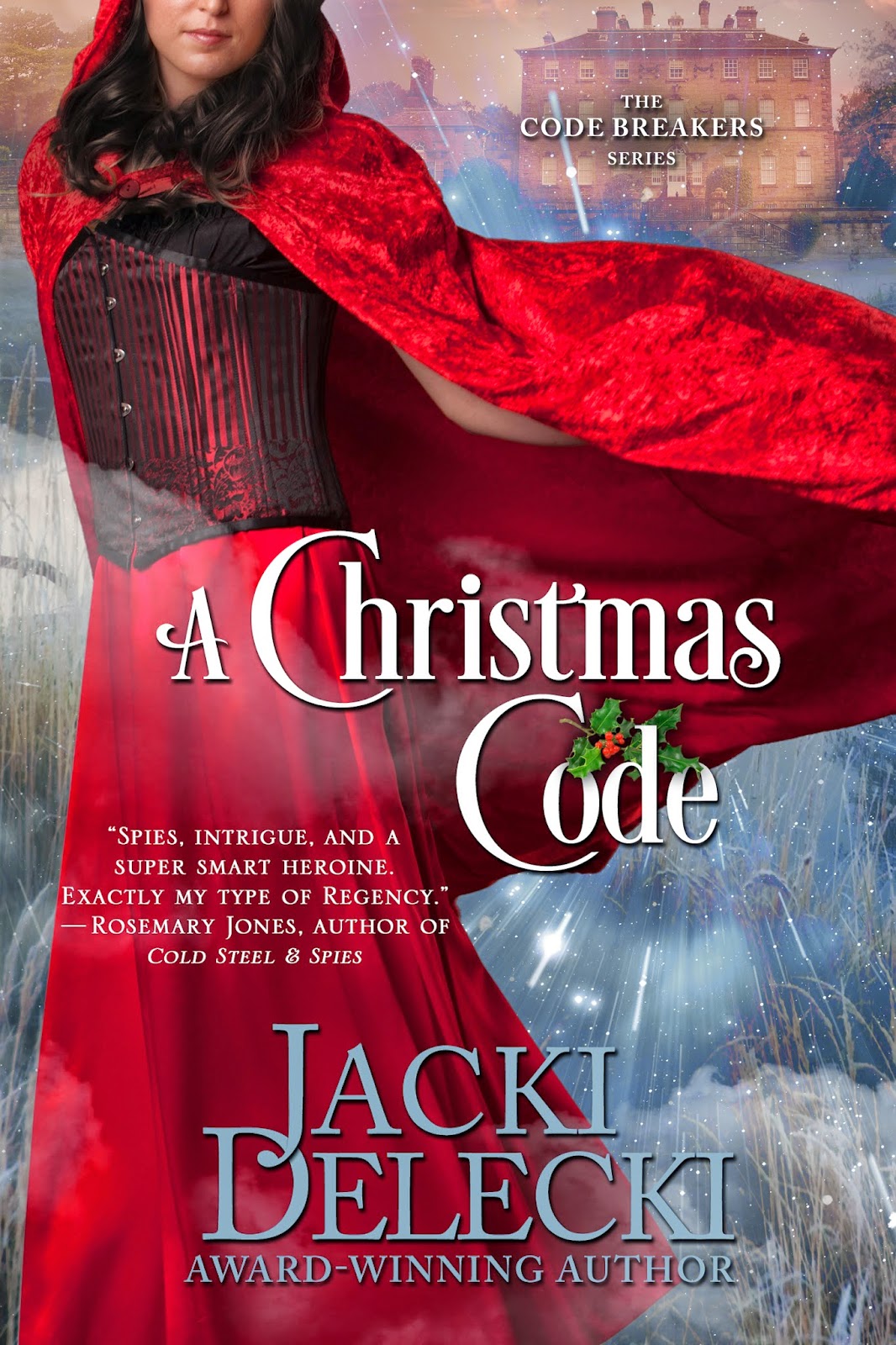 Ash, recently returned from three years undercover in France in His Majesty’s service, wants nothing more than to complete his final mission and retire to his bucolic country estate. However, what seemed a simple assignment to protect the Prince Regent at a Christmas party turns into a maze of intrigue, desire, and treachery.

Adding to the perilous secret operation is one problem Ash never anticipated: The appearance of the reckless, enticing Gwyneth, who has blossomed into a gorgeous woman and self-appointed spy. When a snooping Gwyneth uncovers a shocking secret, she puts herself in mortal danger.

Can Ash protect Gwyneth and the Prince from French assailants and, at the same time, win the passionate lady's heart?

Can Ash and Gwyneth both triumph as winners in the game of spies and love?

Hot and breathless from performing the newly imported French dance steps of the quadrille, Gwyneth paused during the break in the music. She fanned her heated cheeks repeatedly, attempting to cool herself. Lord Henley glanced down at her. His lips were tight, his eyes dark with need. She had seen the same look on the faces of many men, but never on the face of the only man who mattered.

She wanted to see the same burning desire and possessiveness in the eyes of her childhood infatuation as she knew blazed in her eyes when she looked at the impossible but dazzling Viscount Ashworth.

The gentleman, newly arrived, had barely glanced at her despite the new gown made especially to entice the hard-headed rake. Her friend and dress designer, Amelia, obsessed with the simplicity of Greek togas, had crisscrossed sky blue silk across Gwyneth’s ample chest with a dramatic décolletage. The back of the gown was draped in the same manner with a revealing V. It was a simple design, but sensual in the way the fabric clung to her body.

She felt alluring and hopeful that tonight Ash would finally throw off all the restraints. She had felt his eyes on her back, knowing he watched her as she gaily danced the intricate pattern she had recently learned from her French dance master.

Lord Henley offered his arm as the quadrille ended. “May I take you to the refreshment table for a glass of punch? This new French dance is very demanding.”

“Thank you. I’m not thirsty. Can you please take me to my dear friend, Miss Bonnington?”
Lord Henley’s eyes clouded with emotion. Gwyneth couldn’t refuse the dance, but she needed to escape the gentleman before he embarrassed himself. She wanted to spare him the pain of rejection. After five marriage proposals this season, she had become somewhat of an expert in recognizing the signs of imminent declaration.

“Thank you, sir, for the dance.” Gwyneth did a brief curtsy.

Lord Henley bowed. “It was my pleasure.” He hesitated, then sharply nodded his head. She didn’t want to be unkind, but there was no reason to pretend interest and encourage hope when there was none.

They watched Lord Henley circle to the other side of the room.

Amelia hid her face behind her fan, her bright eyes dancing in merriment. “Another stricken gentleman.”

Jacki’s love affair with the arts began at a young age and inspired her to train as a jazz singer and dancer. She has performed many acting roles with Seattle Opera Company and Pacific Northwest Ballet. Her travels to London and Paris ignited a deep-seated passion to write the Regency Code Breaker Series. Jacki is certain she spent at least one lifetime dancing in the Moulin Rouge.

Jacki has set her Grayce Walters Mystery Series in Seattle, her long-time home. The city’s unique and colorful locations are a backdrop for her thrilling romantic suspense. Although writing now fills much of her day, she continues to volunteer for Seattle’s Ballet and Opera Companies and leads children’s tours of Pike Street Market. Her volunteer work with Seattle’s homeless shelters influenced one of her main characters in An Inner Fire and Women Under Fire.

Jacki’s two Golden Labs, Gus and Talley, were her constant companions. Their years of devotion and intuition inspired her to write dogs as main characters alongside her strong heroines. A geek at heart, Jacki loves superhero movies—a hero’s battle against insurmountable odds. But her heroines don’t have to wear a unitard to fight injustice and battle for the underdog.

Look for more heart-pounding adventure, intrigue, and romance in Jacki’s Code Breakers Series. A Code of Love is the first book in the series. A Christmas Code—A Regency Novella, is now available at all retail sites.  A Code of the Heart will be released on Valentine’s Day 2015.

To learn more about Jacki and her books and to be the first to hear about contests and giveaways join her newsletter found on her website: www.jackidelecki.com. Follow her on Facebook—Jacki Delecki; Twitter @jackidelecki.