Congratulations to "Jennifer D.", the winner in Maria Elena's giveaway. Thank you to all who participated!
THE COIN 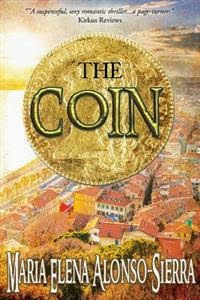 The cost of this coin might just be too high... When Gabriela finds a mysterious coin in the French Riviera, she is thrust into a struggle between governments, terrorists, and madmen, all seeking vital information she doesn't know she has. Richard, the intelligence officer assigned to protect her, has all he can do to keep her safe--and keep the stirrings of his heart from endangering them both. 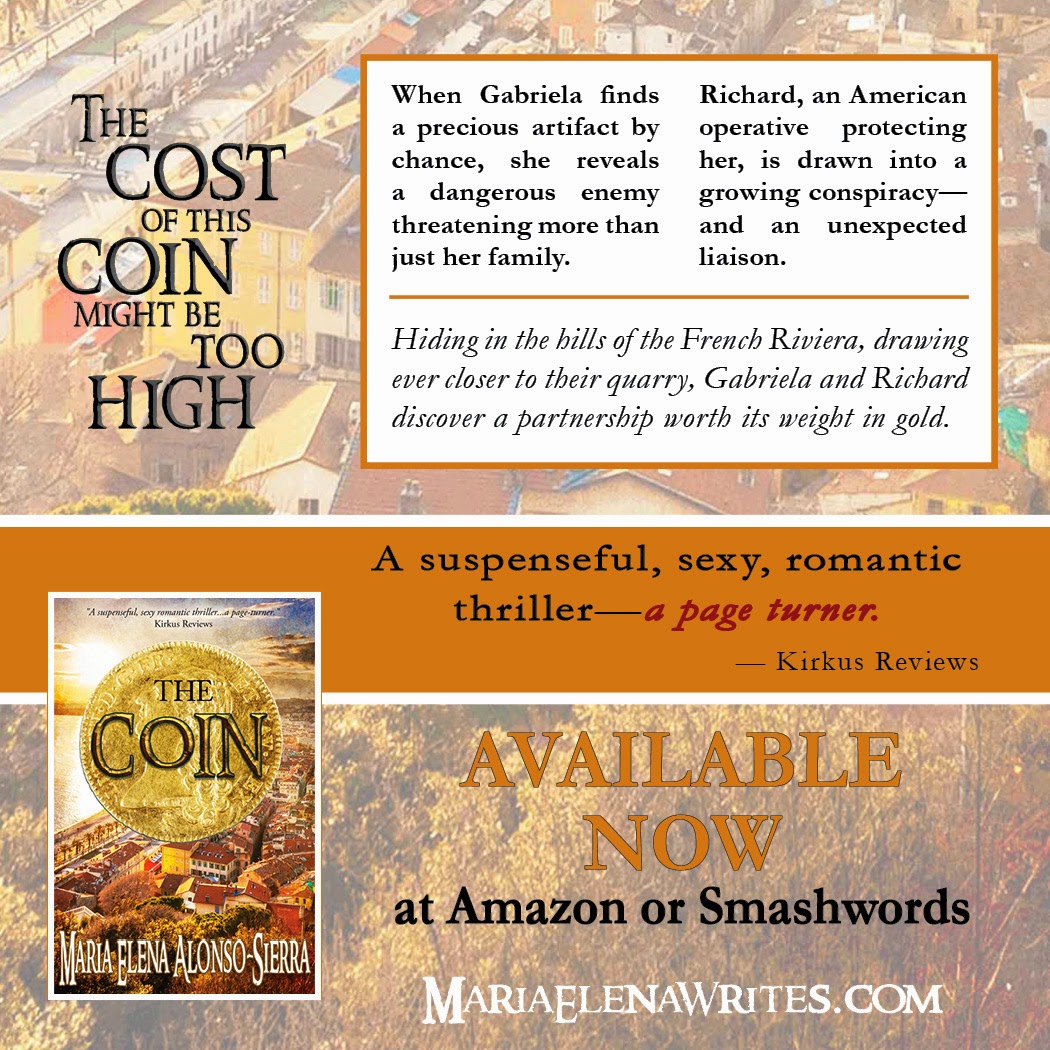 Excerpt
Richard carefully disengaged her arms.  “Sweetheart, I have to assess any damage.”  His voice was soft, husky, as if he were experiencing difficulty with it.

Gabriela finally let go.  She tried to swallow, but her mouth was dry and her body couldn’t stop shaking.  Seconds ago, this building had felt pleasantly cool.  Now, it felt like an icebox.  Her throat constricted and she tried to hold back tears.  She never thought she could feel this frightened.

“I’m fine,” he said, but didn’t look up from his gentle examination of her.  If he did, he was afraid she would read the horror in his eyes, the anger, and his vulnerability.  He had been prepared for anything—but this?  Richard concentrated on cataloging her injuries.  This had been too damn close.

Gabriela sensed that, despite his words, all was not well with him.  Richard’s hands were shaking slightly.  His tight discipline seemed to be fraying like a spider’s web against buffeting winds.  She had once scoffed at the idea of Richard ever losing control, but now she was aware he was human, not a superhero of comic strip proportions.  He could be hurt, and had been, trying to protect her.  The back of his shirt sported burnt patches where hot metal had struck him as he’d shielded her body after the blast.

He pried her hands open and studied her battered palms.  A shudder shook him.  “God, Gabriela.”  His voice sounded hoarse.  “You could’ve been killed out there.”  His eyes connected with hers.  They were violently dark, in stark contrast with his ashen face.  “If anything had happened to you—” He stared at her lovely eyes and knew he couldn’t have borne it had she died.  “I don’t think I could have lived with myself.”

He cupped her face gently, his thumbs roving softly across her cheeks, savoring her softness, her warmth, her life.  Gabriela closed her eyes, avoiding the raw pain she read in his, her heart thumping outrageously at each caress.  “I—” She lifted her eyelids and held his look for a moment, a deep flush heating her face.  “Ditto.  To you, I mean.”

Her simple confession destroyed the final barrier that had caged him away from her.  His thumbs shifted to her lips, felt the slight tremors there.  With a hunger so fierce it practically drowned him, he brought her face to his and kissed her, softly at first, wanting to taste her, to absorb her tremors.  When she opened her lips to him in welcome, he dived in, drinking deeply, longingly, wanting to fuse with her.

Gabriela had never heard her name whispered with such longing, such heat.  It snapped her back to reality.  She pushed him gently away, hiding her face in shame and shocked at her own response.  “No.  No more.  I should never . . . we can never—” She pressed her palms against her cheeks.  They were burning.  “This should not have happened.”

“No.”  She got up abruptly.  She knew what Richard wanted to say, but she couldn’t allow it.  Things that were said could never be taken back.

Author Bio
Maria Elena Alonso-Sierra is a full-time novelist based in North Carolina. With Cuban roots, she has lived in many countries, including France, the setting for her first novel, The Coin. She speaks English, Spanish, French, Italian, and German, and reads Latin, Middle English, and old French. She holds a Masters in English literature, specializing in medieval romances, and is currently an active member of the Carolina Romance Writers. She loves to hear from her readers, and always hopes to open a dialogue with her fans.

Giveaway
Signed print copy OR “Authorgraphed” Kindle version OR epub version of The Coin along with a bookmark and rack card.

Giveaway ends 11:59pm EST November 29th. Please supply your email in the post. You may use spaces or full text for security. (ex. jsmith at gmail dot com) If you do not wish to supply your email, or have trouble posting, please email maureen@justromanticsuspense.com with a subject title of JRS GIVEAWAY to be entered in the current giveaway.