Which Shade of Midnight are you?

With: Robin Perini and Claire Cavanaugh

Congratulations to "Janet K." and "Marcy C.", the winners in Robin and Claire's giveaway. Thank you to all who participated. 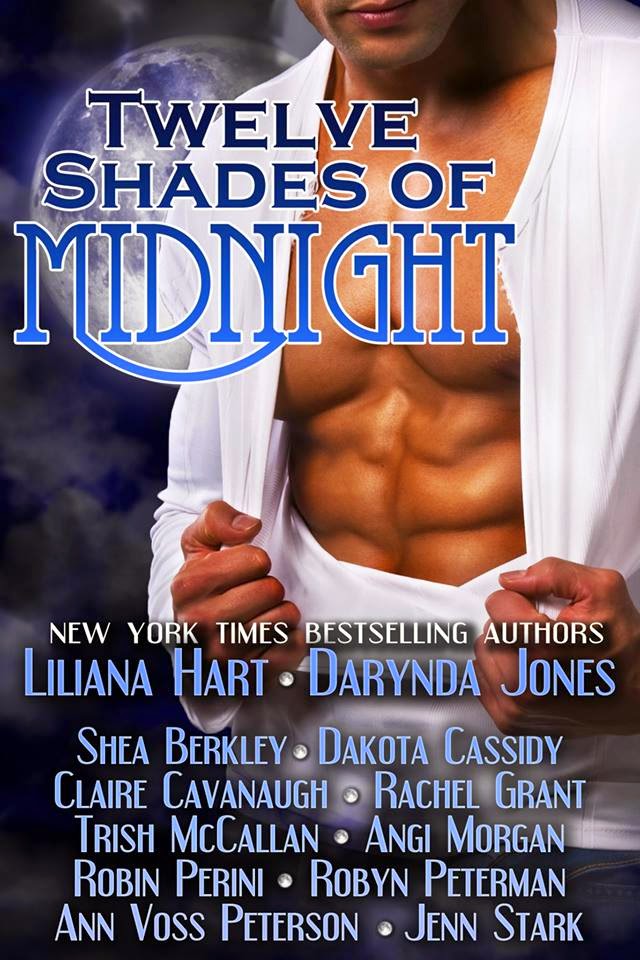 That’s the question twelve authors are asking with a unique anthology titled TWELVE SHADES OF MIDNIGHT.  New York Times Bestselling authors Liliana Hart, Darynda Jones and Robyn Peterman headline this talented group that explores paranormal romance in all its shades. From the blackest depths of evil to the playful wink of pink to the green hue of envy, these never-before-released novellas will propel readers through magical journeys sure to evoke a colorful spectrum of emotions.

So what do two authors think about this amazing project?

“I’m just excited to be a part of this anthology,” says Robin Perini. “There are so many fun elements. For example, you can read your favorite author’s novella, but there’s a bonus. In each of the stories except one—and I won’t tell which one, because that’s part of the surprise—you’ll find Max Midnight.”

Claire Cavanaugh grins. “Max Midnight could be anything. It’s a secret, but I can give a few hints. Which of these is Max Midnight? 1) A vampire slayer gone bad; 2) A pair of jeans; 3) A convertible or 4) A witch?” Three of those examples are accurate; one is a red herring. Readers will have to read the stories to find out.”

These two friends have known each other for what-feels-like forever, and this anthology is a dream come true.

“We both write romantic suspense and we both love paranormal, so combining the two was a blast,” Robin says with a twinkle in her eye.

In most writing genres, there is an essence of fate, with somewhat expected outcomes after each book. Romance readers expect a Happily Ever After. Mystery and Suspense expect the villain to get his comeuppance in the end and good will triumph. Science Fiction readers expect the heroes and heroines to save the world, planet, or starship. Fantasy readers expect creatures, magic and mayhem to be set to rights to return to a safer world. Paranormal readers expect strange or otherworldly entities or happenings to be dealt with and the hero and heroine to triumph.

In real life, fate steps in to change our lives as well. 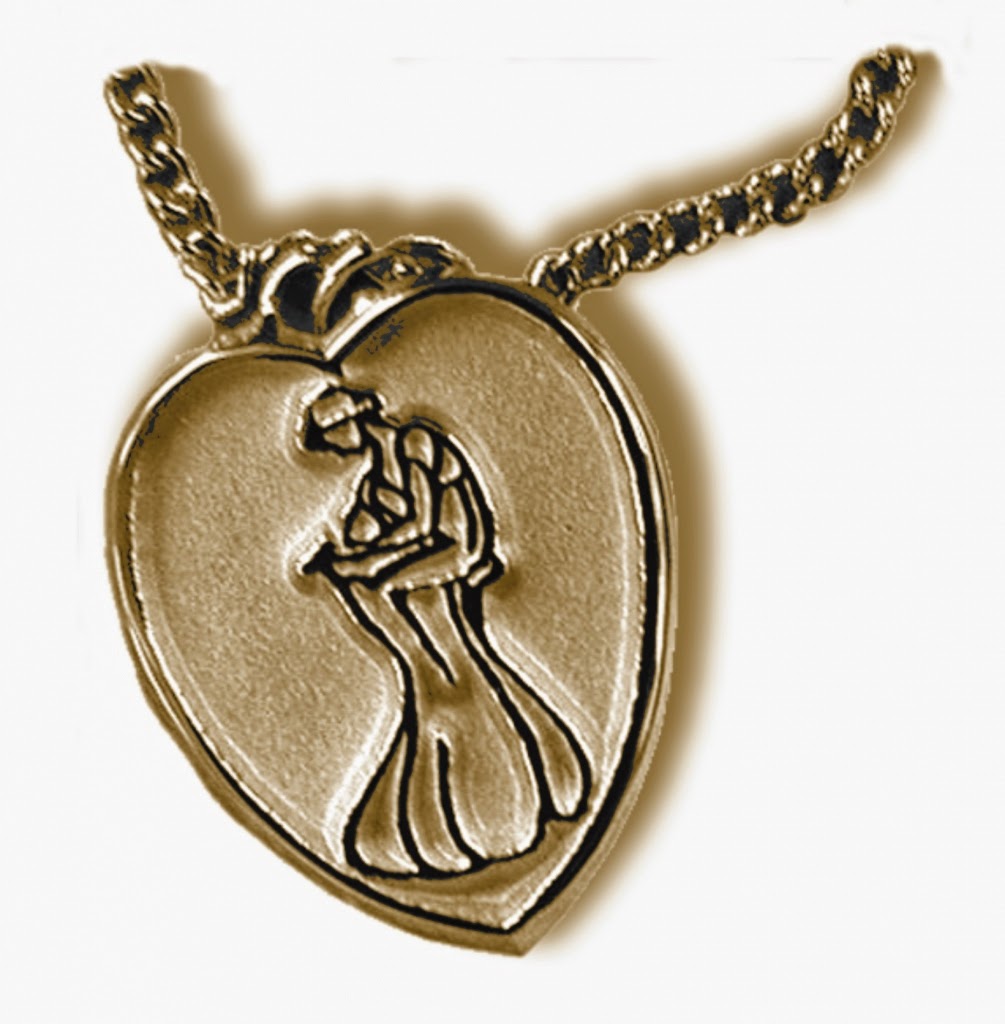 In 1999, two writers met under auspicious circumstances. Both RWA Golden Heart Finalists (Claire in the Romantic Suspense category, Robin in the Paranormal category), they attended a conference in Chicago but had never met. That year, the classes offered for suspense writers were outstanding. The first class they sat on opposite sides of the room, barely taking note of each other, except for the fact that they were some of the few people who didn’t blanch at the bluntly stated statistics they were hearing.

They walked separately down the hall to the next class on Forensics, a bit of curiosity building in someone who obviously shared their darker interests.

By the fourth time this happened, Robin and Claire both suggested that they walk to the next class together. They sat in rapt attention in the front row through the crime scene photos and blood spatter mock ups, never once uttering the moaning heard from other participants. 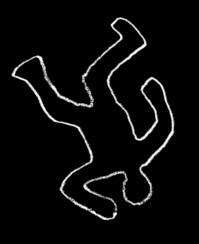 “That’s how our writing friendship was born,” Claire smiles, sipping a cup of coffee. “We became best friends over a bunch of dead bodies.”
Which makes Twelve Shades of Midnight, a paranormal anthology the perfect fit for these two authors. A bit of fate, a bit of hope, and a lot of magic. Sometimes that’s the way the world works.

TWELVE SHADES OF MIDNIGHT will be released the week of Halloween, when magic, mysticism, and midnight collide. Happy Reading Everyone!! 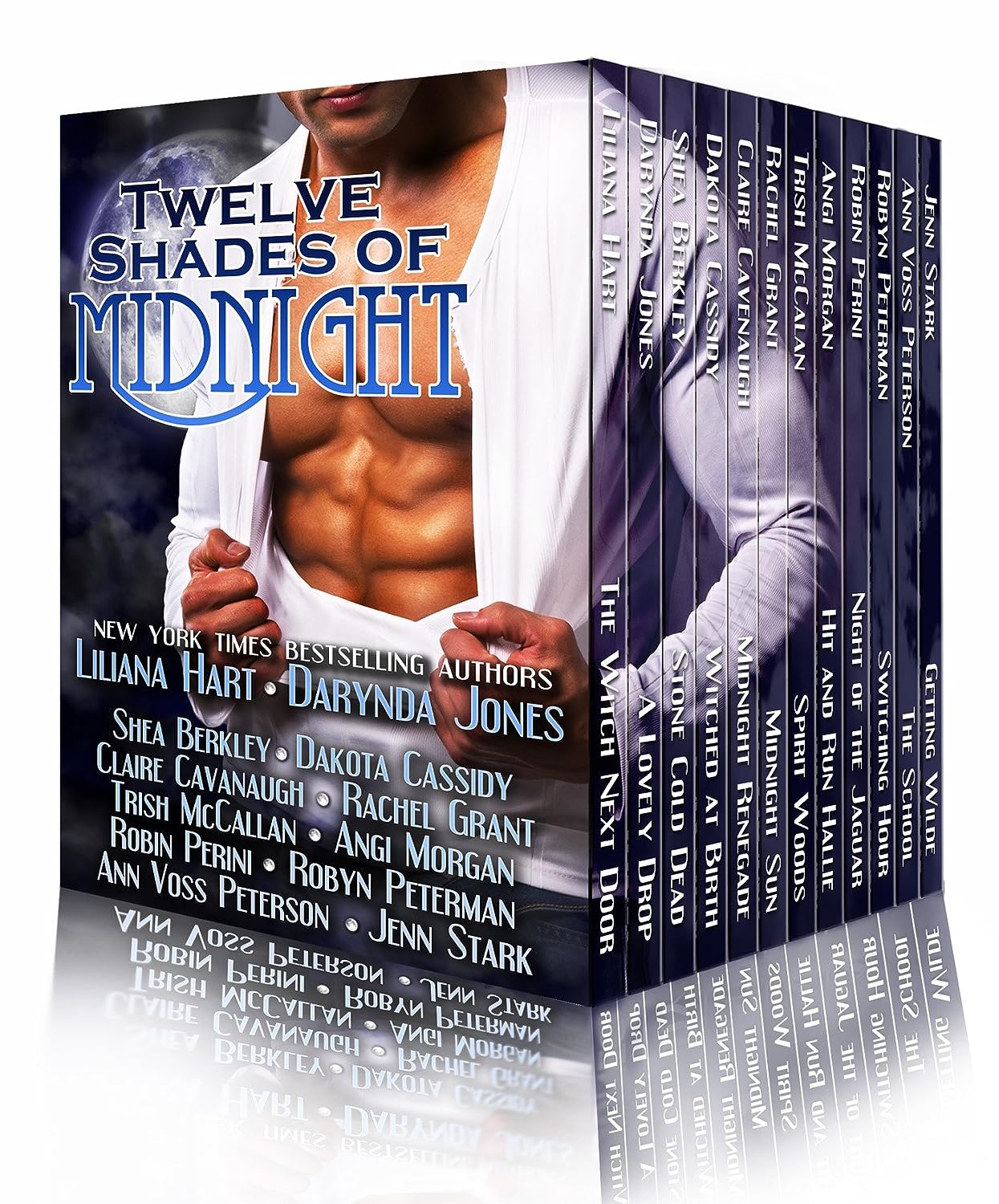 ABOUT Robin Perini ‘s DARK GUARDIANS: NIGHT OF THE JAGUAR
Enter the world of the Dark Guardians. His destiny is to destroy all things dark, soulless and evil as a member of the Order of the Jaguar She has been infected with a virus that has changed her from human to something more…and her soul is at risk. Can a man born to kill her find a way to save her—or will he be forced into a choice that will destroy them both?

NIGHT OF THE JAGUAR
The animal within Cade, the heart of the jaguar, pounded strong and ready to battle. With the speed of a vampire, he sideswiped Branson. The man fell onto his back, staring openmouthed at Cade. He pressed his forearm against the vamp’s throat. “Do you know what I am?”

“Well, this myth is going to kill you.” Cade grabbed Branson’s collar and jerked him to his feet. “Look into the eyes of those you’ve killed. They were innocent.”

“Did they plead?” Cade leaned closer, his quiet words jabbing with undisguised disgust. “You were a good man. Do you even remember the meaning of compassion?” Cade rested the blade of his machete against Branson’s throat. “How can you when you have no soul?”

ABOUT Claire Cavanaugh’s MIDNIGHT RENEGADE
In the first of the new SEAL Team Infinity Series, Navy SEAL Commander Alex “Ice Man” Winters vows to take down those responsible for killing half his team and turning him into a genetically-altered monster. Still, when an assassin strikes near his hideout, Alex can’t leave FBI Special Agent Samantha Gennaro to die…even if her missing father created the serum that altered his DNA. With only once chance to reclaim his humanity, Alex must trust her…even as betrayal stalks them from every turn.

MIDNIGHT RENEGADE
Alex cradled the woman tenderly in his arms as he trudged back through the snow to his hideout. He’d wrapped her shattered head in his T-shirt and her bullet-riddled body in his jacket. From the amount of blood she’d lost, he doubted she’d last much longer.

Pellets of snow whipped against his bare torso, but the cold didn’t bother him.

His upcoming decision did.

Alex could let her die, which might be a godsend for both of them at this point. Or, he could share his tainted blood and risk turning her into another freakish creation like him. He doubted she’d thank him for that.

CHECK OUT THE ANTHOLOGY TRAILER
~ ~ ~ 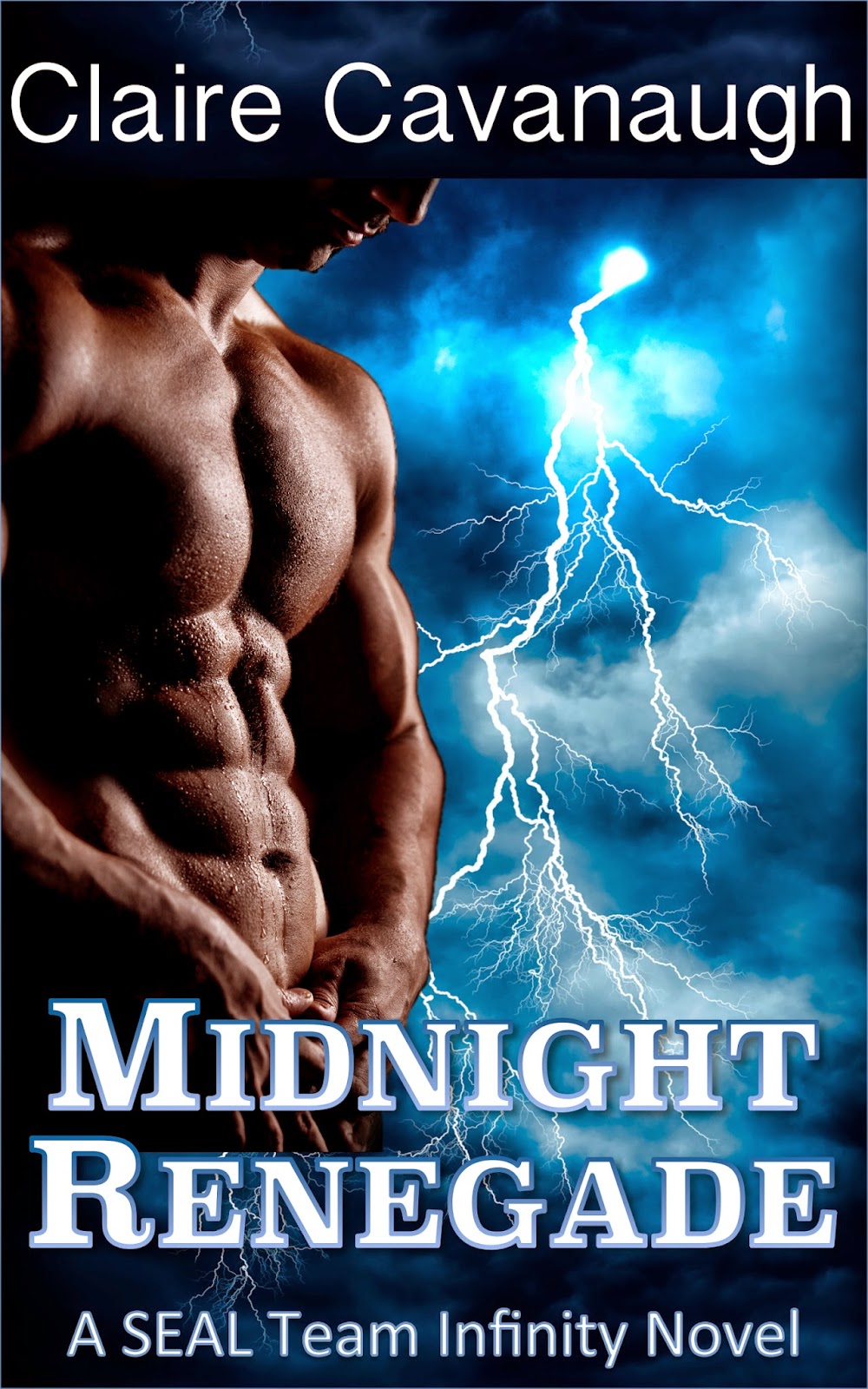 Claire Cavanaugh is an award-winning writer and teacher and is published in short non-fiction.  She is a three-time Romance Writers of America® Golden Heart® Finalist and Daphne Award winner for Paranormal Romantic Suspense. A popular speaker, she is known for finding compelling solutions to plot and characterization problems and has helped numerous authors across the country hone their skills and get their writing back on track.  Several have gone on to hit the bestseller lists. A former bookseller, she currently freelances with Larsen-Pomada Literary Agency, assisting their clients and other writers with editing and story development. Midnight Renegade begins her new SEAL Team Infinity Series.
Website      Facebook    Twitter @ClaireCavanaugh Robin Perini. Combining her love of suspense and heartfelt emotion with her interest in covert ops, RITA® finalist and national bestselling author Robin Perini invites readers to step into the crossfire with her fast-paced, high-adventure, heart-melting love stories. After winning the Romance Writers of America®’s Golden Heart® Award in 2011, Perini went on to create stories that Publishers Weekly calls “refresh[ing] romantic suspense” and RT Book Reviews deems “riveting…and remarkable.” She loves to hear from readers. You can find her online at:
Contact   Website   Facebook
Twitter @RobinPerini   Pinterest    Backlist
~ ~ ~
Giveaway:
Claire and Robin are giving away two prizes. One person will receive a $25 Gift Card (Amazon or B and N). The other person can choose an e-copy of your choice of Robin’s latest books, Game of Fear OR Secret Obsession. (If you want to wait until December 1, you could also choose Christmas Justice).

Giveaway ends 11:59pm EST October 26th. Please supply your email in the post. You may use spaces or full text for security. (ex. jsmith at gmail dot com) If you do not wish to supply your email, or have trouble posting, please email maureen@justromanticsuspense.com with a subject title of JRS GIVEAWAY to be entered in the current giveaway.

So, dear readers, we’d love to hear about a time when fate took a hand in your life, or when the unexplained just took a hand… Leave your comment for a chance to win.