Congratulations to "Brooke B" and  "Erin F", the winners in Leslie's giveaway. Thank you to all who participated!

My siblings and I, especially my older sister and I, used to hang out with the Hester twins—two good old boys if there ever were any. Billy and Bobby were my sister’s age, a couple of years older than me—and scared spitless of just about everything doggone thing you could throw at them. There was a word for that, back then, when you could tease each other without being condemned—the Hester twins were yellow. In fact, I was just as chicken as they were, but the three of us all struggled to hide it from my sister, because Stephanie wasn’t afraid of anything. So we ran after her as we chased snakes, tried to find Mr. Clark’s old horse Pet in cans of dog food he insisted talked to him at night, picked berries at the haunted house and laughed at the boogeyman—the monstrosity that folks in my neck of the woods conjured up to frighten kids into behaving acceptably.

When I wound up living in Nuevo Laredo, Mexico and Laredo, Texas, married into the Hispanic culture which was so astoundingly foreign to me at first, I put rural Georgia and my childhood ghosts aside. New cultural icons and legends beckoned from the shadows and became part of a literary/life fabric that I wrapped myself in and wove for my children. The boogeyman disappeared, replaced by La Llorona—the wailing woman of Mexican lore, who wanders the Rio Grande, in eternal search of the children she sacrificed to those fabled, often dangerous waters.

The story of a desperate young woman forced into the most heinous crime—killing one’s own children—became the first ghost story I heard from my husband’s family. But over the years, it became more. As news stories about murderous moms like Susan Smith, Andrea Yates and Casey Anthony captured public attention, so did sociology classes and random thought. How much of the legend had root in real events, hundreds of years ago?

How many of the disturbed women who paraded through our collective consciousness played into a subconscious awareness of how one can slip and fall into darkness?

Not surprisingly, the tendrils of this ghost story—if indeed La Llorona is a ghost—wrapped themselves around me as I wrote A Love Beyond. When AJ Owens comes home to Laredo to mourn her sister’s death and reclaim a priceless Thoroughbred, she never expects a faint memory from her childhood to have any place in her quest for vengeance. 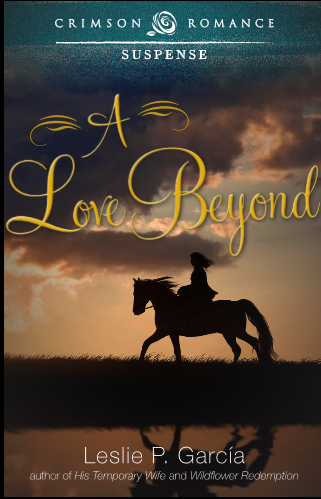 Certainly man of the world Chance Landin, head of security for an extraordinarily evil man, would never admit that the ghosts of his childhood had any place in the real world.

Yet, both face the possibility that certain mindsets, certain vestiges of past fears, are real enough to destroy not only their separate pursuits for justice, but their lives and their love as well.

Where do legends live? Sometimes those collective stories we hold fast to and retell and pretend we never have believed—sometimes, legends live in our hearts and minds.

And occasionally, deny them as we will—we find them in some deep part of ourselves we never outgrow.

Here’s an excerpt from my first romantic suspense, A Love Beyond. I hope you enjoy. Just don’t listen to sounds in the dark. They might be beckoning from a place you’ve forgotten.

Excerpt:
Chance nodded. “Magnificent animal. I’ve only seen him a couple of times, though.
Mike has him standing at his ranch in Nuevo Laredo this season.” He turned back toward the door, waving her ahead of him.

Almost halfway back to the house, a long, plaintive wail sliced through the night air.

Unending, a cry of unbearable pain and grief that raised the hair on AJ’s arms. She
shivered again, hard this time. Beside her, Chance tensed, looking around intently, and from somewhere nearby, large dogs barked threateningly.

“Probably a coyote,” Chance murmured, and in spite of his dislike for her, he laid a comforting hand on her shoulder. Warm and heavy, his hand evoked another shudder of an entirely different kind. Whether he realized the difference, she didn’t know, but he slowly removed his hand.

“I’ve heard coyotes,” AJ retorted, her head cocked, listening for any other faint sounds in the night around them. “Not recently, of course, but I don’t remember them sounding like that. Mountain lion, maybe—but not here. Not in Laredo.”

AJ looked up at him. “La Llorona?” she suggested, teasingly, although the wail could well have come from some poor, deranged soul. From a woman who’d bet everything on love and lost. Like Gina.

She expected him to laugh. Or scoff. Instead, he stared down at her, his face hard, dark, and emotionless.

“Maybe,” he said laconically. “There’s a world of hurt in the world.” For a long moment, he held her riveted there by the intensity of his gaze, his presence. Then he gave another shrug, and turned away from her. “Let’s get you back. The dogs are out and you’re not safe alone.”

“I’m not alone,” she said, although she had to hurry to keep up with him. “I’ve got you,” she added breathlessly, partly to annoy and partly because he walked too fast in his hurry to ditch her.

The glance he cast her menaced. Said clearly that he wasn’t amused. Or attracted. But he didn’t speak. Neither of them spoke until he pulled the side door open to let her back into the crowded ballroom.

“Good night, AJ,” he said politely, but his eyes were filled with distaste as, from across the room, Mike Towers waved at them. “I hope you enjoyed your tour.”

His dislike and lack of respect hurt, she realized. Silly, since she wanted him to dislike her. To stay away from her. She managed a final, flirty smile. “More than you can imagine,” she purred seductively. “I’ll tell your boss how good you were to me.”

Anger tightened his face and thinned his lips, but he said nothing, just turned and disappeared around the corner of the house. Mike Towers was coming toward her, all smile and swagger. Undoubtedly, he thought she’d be grateful to him for the midnight tour. She couldn’t let him know how repulsive she found him. Not yet.

She drew in a deep breath and tilted her chin up in determination. Towers had stolen her horse and her dreams. That was nothing. Gina had taken her life because of him. AJ had no proof, but she knew. And nothing would protect him from her plans for revenge. Not his money, not his power. And certainly not a man like Chance Landin, no matter how diligent he was as head of security.

Far off, so faint she might be imagining it, a high, keening wail echoed in her ears.

“A world of hurt,” Chance had said.

She had taken the words at face value then. But a sudden, strong awareness told her his words weren’t meant to comfort. He was warning her. No. More than that.

Giveaway:
Leslie will be giving away 2 digital copies of A LOVE BEYOND to two lucky readers leaving a comment or email entry.

Giveaway ends 11:59pm EST Oct. 9th. Please supply your email in the post. You may use spaces or full text for security. (ex. jsmith at gmail dot com) If you do not wish to supply your email, or have trouble posting, please email maureen@JustRomanticSuspense.com with a subject title of JRS GIVEAWAY to be entered in the current giveaway.
Posted by Maureen A. Miller at 12:30:00 AM